Innovation and technology in a lavish, classy haven in the United Arab Emirates 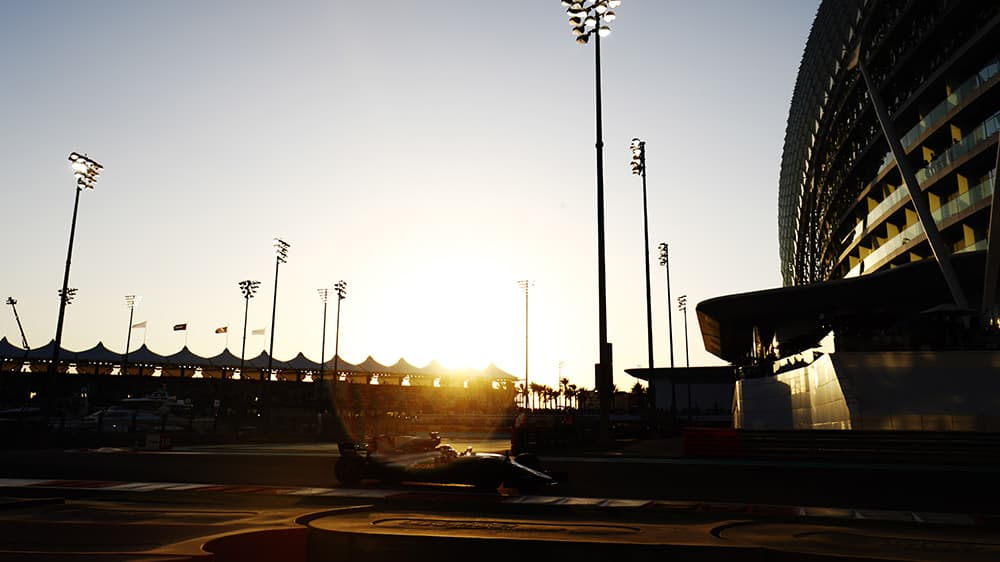 Yas island is a small piece of land located at about a thirty-minute drive from the Abu Dhabi, the capital city of the United Arab Emirates. In the past decade a project was initiated by the Abu Dhabi-based Aldar Properties with the purpose of transforming the island into a multi-purpose leisure, shopping and entertainment centre, for a total cost of over a billion dollars.

The island has an extension of 25 square kilometres, and more than three fifths of it is already or will be part of the project.

Aside from hosting luxurious hotels and white-sand beach resorts, on the island are located many attractions which have made of this location a high-end travel destination. Some of these attractions are the Yas Waterworld, Ferrari World, SeaWorld and, of course the Yas Marina Circuit, the F1 track and drag racing circuit.

THE YAS MARINA CIRCUIT
The circuit was designed by German engineer, racing driver and circuit designer Hermann Tilke; it was then built by contractors of the same Aldar Properties, the company that has been carrying out the development of the projects on the whole island. The Yas Marina Circuit is the second Formula One track to have been built in the Middle East, with the first being the Bahrain International circuit located in the small Arab country.

One of the most amazing features of this circuit is that it was one of the first circuits to be conceived for hosting car races day and night.

It was thus constructed with a permanent lighting system provided by the American company Musco lighting, specialising in the manufacture of sports and large area lighting systems. The same lighting system was installed in the circuit in Qatar; however, it is the Abu Dhabi’s circuit that steals the scene for being the largest permanent sports venue lighting project in the world.

The construction began in May 2007; the total construction cost around 1.300 billion dollars. Finally, on the 7th of October 2009 the FIA granted the final approval for the circuit to hold Formula One races.

Since its opening, the race has been praised, especially for the special grip its track has proved to have, thanks to the material it was built in, graywacke aggregate, shipped to the UEA from England. Other reasons of praise concerned the structure of the race track, which, according to Fernando Alonso and other drivers is “unique”, as it always gives “something to do”.

The twenty-one-corner twist around Yas island and just off the Abu Dhabi coast winds its way through the sandy dunes in long straights and tight corners. The whole development structure of the area also includes a theme park, a water park, Warner Brothers, residential areas and beaches.

The circuit has a total of five grandstand areas for a total capacity of over 41 thousand seats; part of the pit lane runs underneath the track and one of the run-off areas is located underneath the West grandstand.

THE ABU DHABI GRAND PRIX
The first F1 race took place on the 1st of November 2009, as the 17th and final Gran Prix race that year.

The inaugural race was F1’s first ever day-night race, as it started at 5pm local time. The floodlights used to illuminate the circuit were switched on since the very beginning of the race to avoid causing problems during the transition from daylight to nocturnal darkness. The race was won by German racing driver Sebastian Vettel. After the experience of the inaugural race, the subsequent Grand Prix were also held at around the same time of the day.

VISITING ABU DHABI. A CITY OF WONDROUS NATURAL AND MAN-MADE RICHES
Aside from the Yas Marina Circuit, here is a ton of other reasons why people should come to visit the UAE.

Abu Dhabi is located on a plethora of islands, most of which are open to tourists all year around and offer a wide spectrum of entertainment and luxury, varying from undisturbed virgin beaches and wildlife havens, to major sports facilities.

The corniche of Abu Dhabi has been recently renovated and it is a popular spot and a main touristic attraction of the city. It is a popular spot where families, habitual joggers or riders on their bicycles could promenade even in the darkness of the night, when temperatures tend to have cooled down.

Tourist can walk on the seaside street from the port to the Emirates Palace passing through a green itinerary along the turquoise waters of the Persian Gulf.

Being the richest city in the world, it should come with no surprise that Abu Dhabi is a privileged spot of vacationing for high-end tourists, sports fans and business people.

The enormous six-star business hotels and resort complexes overlook the beaches and the staggering sea, offering a huge variety of mod-cons, amenities and activities to take part in while on holiday or on a business trip.

For sports and motorsports fans and thrill-seeking travellers
For golf lovers, the Yas Link or the Saadiyat Beach Golf Club are the places to go – one located on the most famous “leisure island” and the other being the region’s first ocean course. It would be a truly unique playing experience to be golfing around marvellously white sandy beaches, stunning sea views and sand dunes.

For F1 fans, theme parks and motorsport lovers, instead, the apex of the tour would be reached once having spent time at Ferrari World Abu Dhabi, a mainly indoors amusement park on Yas Island. It is the first Ferrari-branded theme park and the place where Formula Rossa, the world’s fastest roller coaster, is located. The project was started in 2007 and finished only in 2010. The theme park covers an area of more than 85000 square metres. It has been named the best theme park and the best leading tourist attraction in the Middle East for several years in a row now, in addition to receiving the Trip Advisor Certificate of Excellence in 2017.

Tourists can also take a tour behind the scenes of the great technologically advanced motorsport circuit of Yas Marina Circuit. After the circuit tour, there are also sizeable areas dedicated to karting for tourists to try. Or also people can experience what it is like to be on board of some of the world’s fastest and most famous sports cars.

For history and culture lovers
However, Abu Dhabi is not only the location of opulence and plush attractions, as there are also many other free and interesting tours tourists may like to take part in while on vacation. If travellers are interested in history and culture, a popular and charming spot to visit is Abu Dhabi’s Heritage Village, a model of an Emirati village which exhibits the Bedouin lifestyle and heritage. The tickets are free and the place is a popular family trip destination, as the location has several attractions like Bedouin tents set up with campfires and piping hot Arabic teas.

Camels, beautiful Arabian stallions and goats are put on display as well as innumerable artisans’ weaving or glass blowing; people can shop at the markets for typical products like handmade soaps, silver jewellery and traditional clothing.

For the relaxed traveller
Beach vacationers can enjoy the more tranquil side of Yas island, where the island’s only stretch of beach is located.

On Yas island tourists can also find Abu Dhabi’s largest and the UAE’s second largest shopping mall, the Yas Mall, providing an exclusive shopping experience. On of the main events held at the Yas Mall is the National Day of the UAE, which is celebrated through a dazzling array of traditional Emirati activities and entertainment. The celebrations include live stage performances including mesmerising Ayala dances and shows.

Read more
Related Stories
Singapore F1 Circuit
and its technology
race
When Monza
turns red
race
F1 on the streets
of Milan
race
MOST READ
Jacques Villeneuve,
the rising and setting of the son