Why the Degner Curves
are the most remarkable place
in Suzuka 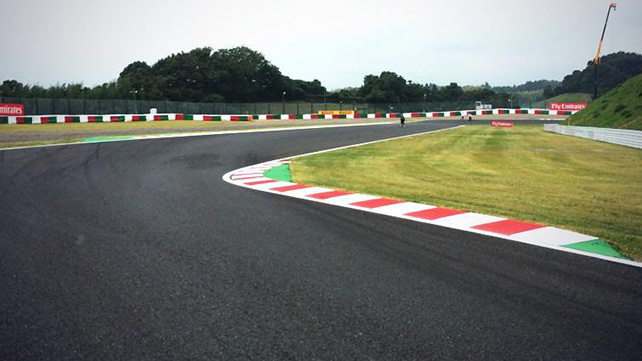 An East German hero
Among all the famous corners at Suzuka – such as Spoon and 130R – people pay comparatively little attention to the two Degner Curves, which consist of a fast right-hander, immediately followed by a tight 90-degree right: the second-slowest point of the track after the hairpin.
But the man that it’s named after – motorbike rider Ernst Degner – has got one of the most fascinating stories in motorsport history behind him.
Degner was a German: more specifically an East German, back in the time when Germany was divided. But during those dark days of communism he was a shining light for his countrymen – as he was a famed MZ factory bike rider, with the spirited East German two-stroke machines (engineered by Walter Kaaden, who previously worked at Adolf Hitler’s secret weapons base in Peenemunde) incorporating enough technology to beat the established names in Europe as well as the emerging competition from Japan.

Enter the Japanese
In 1960, Suzuki had entered their first bike race but were painfully off the pace, finishing the 1960 125 Isle of Man TT a whole 15 minutes behind the winner. It was clear that the Japanese needed some know-how urgently, but where were they going to get it from?
The answer came in the form of a chance meeting the following year between Degner and Suzuki, word of which eventually reached company president Shunzo Suzuki.
During the conversation, Degner indicated that he was tired of his colourless life in East Germany, just as the rest of the world was beginning to emerge from post-war austerity. He resented his Stasi secret police minders who followed him to every race (they were so concerned that he might defect, Degner’s family wasn’t permitted to travel to races – so he would always have a reason to come home); and of course he hated the fact that many of his – less talented – fellow riders were paid a comparative fortune, while he had to be content with a communist salary that was roughly equal to that of any other MZ worker.
So a deal was struck. Degner would defect, help Suzuki to develop their bikes, and then ride them in competition. But he wouldn’t go without his family, and with the Berlin Wall by now in place, getting them out was going to be almost impossible.
During the weekend of the 1961 Swedish motorbike Grand Prix at Kristianstad, Degner arranged for an affluent West German friend of his – who made frequent trips to East Berlin on business – to smuggle his wife and children out of the country in a specially made secret compartment in the boot of a Lincoln Mercury. Degner’s bold thinking was that the Stasi spent more time watching him when he was abroad than his family back at home.
The plan worked. Straight after the Swedish Grand Prix, Degner was driven secretly to Denmark by a member of the Suzuki team, where he was reunited with his family before they eventually moved to Hamamatsu in Japan: Suzuki HQ.
As for MZ, it immediately cancelled its foreign racing programme, just to make sure that nobody else got the same bright idea.

The ecstasy and the agony
Degner entered the 1962 season on a Suzuki, but was constantly fearful that he would be assassinated by the Stasi. At the end of that season though he spectacularly claimed Suzuki’s first title. Then the following year, his fairy tale started to turn into a nightmare.
In the 1963 Japanese Grand Prix, he came off his bike at the place now known as the Degner Curves and suffered burns that required more than 50 skin grafts to fix after his Suzuki’s fuel tank exploded.
Two years later he shattered his right leg during the Italian Grand Prix at Monza, then in 1966 he crashed again in Japan and suffered head injuries, effectively ending his career.
Having spent so much time in pain, he relied heavily on morphine: many people have suggested that this was a factor that led to his sudden death aged just 53 in 1981, on the island of Tenerife. Other – more fanciful – theories speculated that the Stasi finally caught up with him.
But in Suzuka, his memory lives on as a founding father of Japanese success in bike racing. It’s an arena that Pirelli is actively involved in alongside four-wheeled competition: three out of the top five manufacturers in last year’s World Superbike championship – exclusively equipped by Pirelli – were Japanese. They may never have got there had it not been for Ernst Degner.
So spare a thought for him as you watch the Japanese Grand Prix this weekend: one of the most incredible adventurers ever to set foot in Suzuka.

The same tyres for everyone at the first five Grands Prix of 2017. Here’s why…

The Italian technology
behind Formula One

race
MOST READ
Getting the show
on the road