When the stars
come out at night

Motorsport has its own Oscars ceremony. It’s called the Autosport Awards, and Pirelli is a sponsor 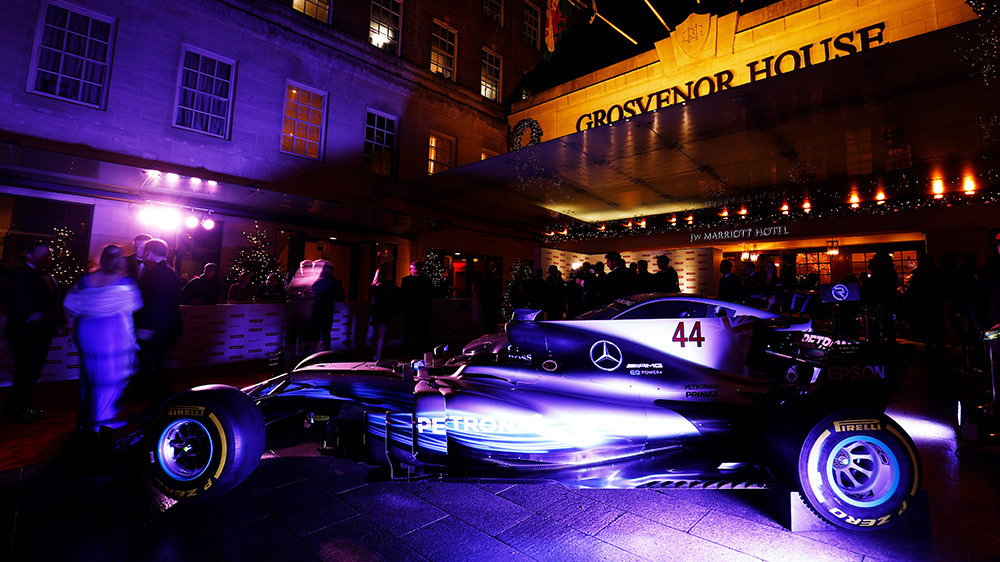 All the greats. In one room.
What's the final round of the motorsport season? It’s not the Abu Dhabi Grand Prix, or even Rally Australia. Instead it’s December’s Autosport Awards in London: the closest that motorsport gets to an Oscars ceremony.
The annual prize-giving, which has been going since 1982, was originally held in Kensington but then moved to the Grosvenor House Hotel on Park Lane – on the grounds that it has the biggest ballroom in England’s capital. With around 1000 people showing up to the Autosport Awards every year, that’s absolutely needed. And they are top quality people too: in the past, the Awards ceremony has hosted Ayrton Senna and Michael Schumacher, while more recently Sebastian Vettel was guest of honour – keeping the crowds entertained with a spookily accurate impersonation of his Ferrari team mate Kimi Raikkonen…
However, the Awards are about far more than just Formula 1. All forms of motorsport are celebrated, including motorbikes. The highlight of the evening is the announcement of the McLaren Autosport BRDC Award: a unique prize that gives a young British driver a test in a Formula 1 car, membership of the prestigious British Racing Drivers’ Club, the James Hunt Trophy to take home, and a cheque for £100,000. A prize worth winning, in other words.
Previous winners have included David Coulthard (who was this year’s Master of Ceremonies), Dario Franchitti, Jenson Button, Anthony Davidson, Paul di Resta, and Lando Norris. Who next?

A night to remember
Like the Oscars, you have to be there: just to be papped on the red carpet if for no other reason. And Pirelli is a sponsor, bringing around 20 guests to the Awards each year and putting its name to many of the prizes. With more than 340 championships on both two and four wheels, the Italian firm has competition in its DNA – and Pirelli’s head of car racing Mario Isola was one of the guests. He couldn’t just focus on enjoying his smoked salmon and roast lamb though, as he was one of the interviewees picked out for the roving microphone wielded by Julia Piquet: the daughter of three-time F1 world champion Nelson Piquet from Brazil, who received a special award for lifetime achievement at the end of the evening.
Mario spoke about Pirelli’s Formula 1 tyre range for next year, which includes the new pink hypersoft tyre, and all the other motorsport activities that Pirelli has planned for 2018: including GT racing and a return to the World Rally Championship.
Appropriately enough, as it was a Pirelli-equipped former rally driver who presented five-time world rally champion Sebastien Ogier with the Rally Driver of the Year award: Robert Kubica, who will hopefully be back in Formula 1 with Williams next year…

Polishing the silverware
Some of the prizes were expected – there were plenty of trophies for Mercedes and Lewis Hamilton – whereas others weren’t so predictable: there were also awards for the Automobile Club de l’Ouest (the organisers of the Le Mans 24 Hours) and for Derek Warwick; a former F1 driver and former president of the British Racing Drivers’ Club.
Finally, the big McLaren Autosport BRDC prize was revealed: the award that is practically a passport to Formula 1, voted for each year by the readers of Autosport. The four nominees were so nervous that they could hardly eat a thing all night. And then, to a fanfare of fireworks, the winner was announced: Dan Ticktum.
The 18-year-old has a remarkable story. Two years ago, he bounced back from a year-long ban from motorsport (for driving dangerously) to learn his lesson and join the well-known Red Bull Junior team. This year, he won the Macau Formula 3 Grand Prix after his two key rivals both crashed on the very last corner.
As Dan reflected later, it was the perfect metaphor for his own career, which has been characterised by highs and lows but is now firmly back on track. At the time, he was just lost for words. Luckily, Eddie Jordan was also around to fill in the silence…
The party continued late into the night, followed by an after-party in South Kensington (not so far from where the Autosport Awards were originally hosted in the 1980s) once the ample possibilities of the Grosvenor had been exhausted. We’d love to say more – but the stars of world motorsport wouldn’t thank us for it.