What do you need for the Spa 24 Hours? Top Gear, obviously

A genuine TV star – and accomplished racing driver – at the Spa 24 Hours tells us what it’s like to take on a truly epic challenge. And what’s coming up in your favourite motoring show 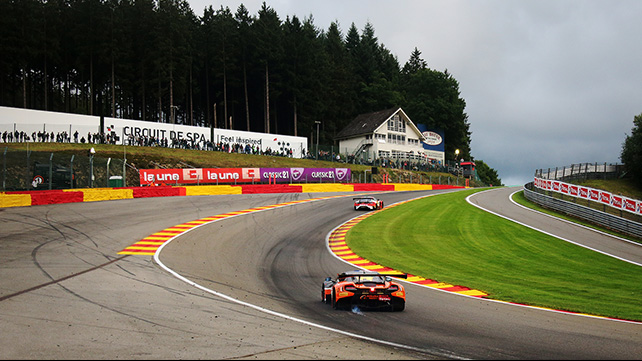 When TV and motor racing meet
One of the most familiar faces at the Spa 24 Hours spends a lot of his time on a deserted airfield in England, frequently in the company of a Hollywood star, together with a man dressed entirely in white who never takes his helmet off. That may seem like a strange existence, but it’s pretty normal for Chris Harris and his Top Gear co-presenters Matt Le Blanc and The Stig (if you can call a man who never speaks a ‘presenter’.)

When he’s not fronting Top Gear and travelling the world, Chris is also a keen racer, and his competition CV includes some pretty impressive events, such as the Nurburgring 24 Hours and Spa 24 Hours. This year, he did Spa in a McLaren 650S GT3 for the first time, having raced a Bentley last year.
It was certainly a different experience, involving a trip to the medical centre before the race even started, a few games of bumper cars at the start, and plenty of industrial-strength tape to hold the McLaren together. But the #188 Garage 59 crew of Harris, Alexander West, Chris Goodwin and Bradley Ellis eventually made it to the finish in 33rd overall.

“This is the most professional race I’ve ever been involved in: the consistency at the top is amazing, with around 20 cars in half a second,” said Chris. “As an amateur you have to accept that you’re never going to match that sort of pace. But that still doesn’t mean that you can’t get a good result. It’s hare and tortoise time….”

Tyred and emotional
One of the most specific features of Pirelli’s P Zero DHD tyre, which all the Blancpain GT Series cars run on, is that it’s designed to work just as well with professionals or amateurs at the wheel: one of the traditional hallmarks of GT racing. It’s also designed to work with a massive range of different cars: both front-engined and rear-engined. With 10 different brands represented this year at Spa, that’s important.

“The Pirelli tyre is really interesting,” said Chris. “You’re never going to make a tyre that pleases everyone. What a racing driver will always want is a tyre that gives you ultimate grip for ever. But that’s obviously never going to be the case. What you want instead for these races is a tyre that is challenging but not punitive. And I think Pirelli has done a pretty good job with that.”
At Top Gear, they’re obviously used to superlatives, but Chris was blown away by the sheer scale of Pirelli’s presence in Belgium, with more than 13,000 tyres at Spa.

“Just look at the sheer size of the operation,” he pointed out. “It’s taking over the paddock! Seriously though, I’m really glad that Pirelli’s involved. It’s fantastic for the championship.”
Not so great for the championship was the man carrying a Formula 3 wing through the Spa paddock, who sliced Chris’s head open inadvertently: leading to a trip to the medical centre before the race had even started and several stitches. It was hardly ideal preparation, but the Spa 24 Hours has always been about taking the pain. Just not in that way.

From Blanchimont to Le Blanc
The fact that Chris found 24 hours spare to race at Spa in the first place was an impressive achievement, given that he’s probably the world’s busiest man. He’s recently been filming season 25 of Top Gear, in the company of Matt Le Blanc, which will air next spring.

“We’ve had a lot of fun so far this summer: Matt is a dude who really gets it,” said Chris. “We've been on location in Norway, where obviously neither of us were speeding! We’ve also been in France with an older car, and America and Portugal, where we've been driving a certain British mid-engined sports car, which may or may not come from Woking.”

Obviously, Chris is a McLaren fan, with the British cars using Pirelli P Zero tyres on the road as well as on the track. And he knows more than most people how important it is to stay grounded if you’re presenting the world’s most famous motoring programme.

“At Top Gear, we’re constantly pushing to develop great entertainment and not get lost in ourselves,” adds Chris. “I can’t reveal too much about what’s in the show next season, but there are definitely a lot of laughs and some silliness in it…”