Two champions worshipping at the Temple of Speed 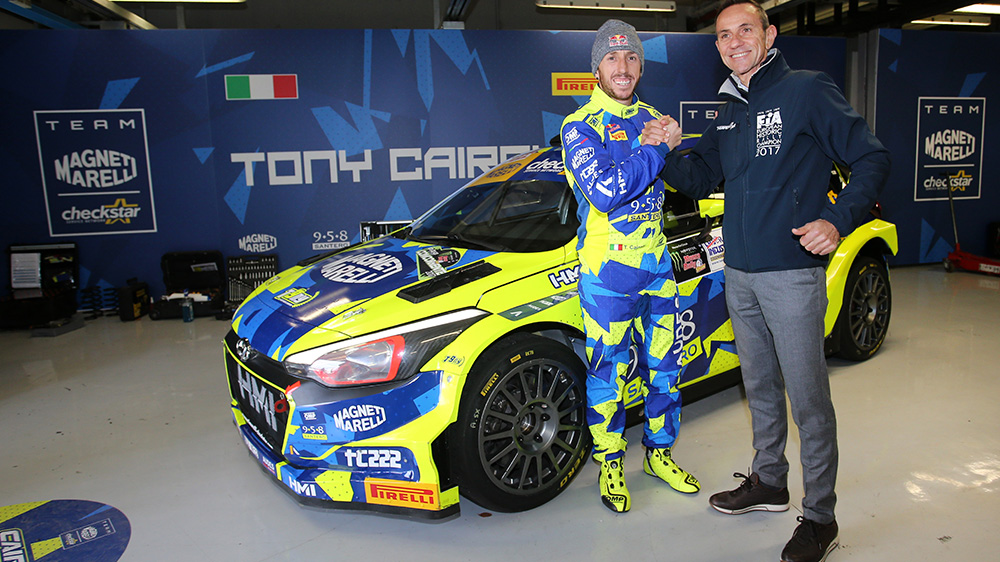 Rallying throughout the ages
If Monza is the temple of speed, then its champions are the high priests who worship at the altar. The Monza Rally Show, which takes place every year in early December, is where all sorts of different disciplines – and occasionally champions – meet.
The current most successful driver on the event, Valentino Rossi, is better known for his remarkable exploits on two wheels, but previous Monza Rally winners also include those who have triumphed at Le Mans and in Formula 1 as well as on the World Rally Championship.
It's that sort of eclectic event: a true end of term festival of motorsport that allows people to try something different as well as catch up with old friends.
One man who dropped in was Pirelli’s newly-crowned historic rally champion, Erik Comas, who clinched his title this year in a stunning Lancia Stratos that was prominently displayed outside Pirelli’s hospitality unit, which itself has a strong rallying heritage.
This facility is known as the ‘Comet’, as it was originally the property of the Subaru World Rally Team. Subaru’s corporate logo is Pleaides: an open star cluster. Hence why their motorhome was called the Comet, and when Pirelli took it over, the name stuck.
With the Stratos, which rallied from the 1970s into the 1980s, then the Comet – with Subaru dominating the 1990s into the 2000s – and finally Paolo Andreucci’s multiple championship-winning Peugeot 208T16, representing the current decade, every era of rallying was on display in Pirelli’s area at its home event: a mere half an hour away from the Milan headquarters. An exhibition of rally tyres through each different era completed the look.

When Comas met Cairoli
Comas, who reached the heights of Formula 1 in his single-seater career before switching to historic rallying many years later, met up with another incredible Pirelli champion: nine-time world motocross title-holder Tony Cairoli, who was taking part in the Monza Rally with a Hyundai i20 World Rally Car. Comas and Cairoli come from different worlds and generations, but they still have an enormous mutual respect for each other’s achievements. The Frenchman and the Italian are united by a love for pure speed and competition: whether it's the elemental challenge of a motocross bike against gravity or the visceral mechanical urge of a Stratos against the most challenging roads in the world.
“Competing with the Stratos on the European historic rally championship this year was not the easy option, but the easy option didn’t appeal to me,” said Comas. “In my spare time, I like to ride trials bikes, so I really love what Tony does: we have the same interests.”
Cairoli too is well out of his comfort zone in a rally car, but as his co-driver Danilo Fappani pointed out: “Tony is pretty much able to adapt to anything very quickly; that’s his really strong point as a driver.”
In the end, he only narrowly missed out on a podium.

The stars of the show
Joining Cairoli on the Monza Rally this year was the usual huge array of drivers from all sorts of different backgrounds, including WRC star Craig Breen (sharing a Citroen DS3 WRC with his girlfriend, European ladies’ rally champion Tamara Molinaro) and Hyundai stars Thierry Neuville and Andreas Mikkelsen, who also took it in turns to drive and co-drive. The biggest star was of course Rossi, with an army of fans following his every move both on and off the track.
There might not have been any examples of the Lancia Stratos on the historic entry list, but plenty of other classic Lancias were at the forefront of the action, including the turbocharged, four-wheel drive Delta Integrale that Comas battled for the European title this year, not to mention a couple of Lancia 037s (one of which won the event) and a Fiat 131 driven by former Monza winner Andrea Zanussi: the man whose family was synonymous with fridges.
Appropriately enough, the December wind chill at night in Monza can only be accurately described as ‘Baltic’. But that’s just another element that makes the whole experience of this unique rally so special. Even when it’s below zero and darkness falls on la pista magica, the champions still come out to play.