Night at the museum

Even people who don’t like museums will love the Museo dell’Automobile in Turin: a snapshot of social history 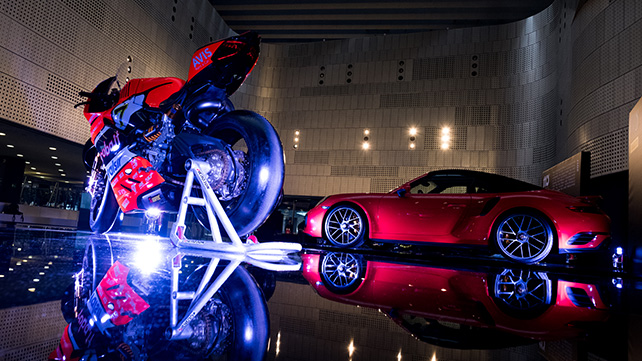 From motorised kettles to hover pods
Rethink your idea of a museum. The Museo dell’Automobile in Turin is about as far removed from a labyrinth of fusty exhibits as a paddling pool is from the Mariana Trench. Instead, the 1960s building just outside Turin is a palace of wonder and delight for all things automotive. It takes you on a journey, where somewhat counter-intuitively you start on the top floor and work your way down to the bottom, but it all makes sense when your visit is over and you step out into what is undeniably – and perhaps disappointingly – the real world.
Up at the top, it all starts with what appears to be a kettle on wheels, but in actual fact is the very first “car”: an eighteenth-century French machine, which was steam-powered. From there you step into the world of vintage cars, formed mainly of oversized comedy horns and running boards, and then into the glamorous cocktail-swilling 1920s, the outrageous chrome-laden 1950s, the flower power vehicles of the 1960s, which give way to the artfully lurid hues of the 1970s and more angular 80s. The visit ends not with the current era but instead a glimpse into the future, via the concept cars of the 1990s and 2000s, which now look curiously dated. The irony is that the cars of the future, sipping hydrogen and sunlight with the restraint of an alcoholic in rehab, seem to represent a return to where it all started: small, spindly wheels and cramped interiors: the car effectively forming a workable substitute for the horse. The one thing that history can console us with is that artists’ and engineers’ visions of the future are more often than not wrong. The new millennium has come and gone, and yet nobody is wearing jet packs and using hover pods – despite what they tried to convince us in the 1950s.

Put the milk in the Fiat
More than anything else, the Museo dell’Automobile is a joyously eclectic celebration of all things automotive. And by eclectic, we mean properly deranged. One section of the museum, for example, is dedicated to cars that have been turned into household implements and objects. So we meet a Fiat Panda that is now a cooker, and a Fiat 600 that is now a fridge. Not to mention a bed that was once a Volkswagen Beetle. Leaving the fun aside – and there are hours of fun to be had, as you wander through perfectly frozen snapshots in time, playfully capturing the spirit of every era – there’s a lot to attract serious race fans. The whole story of motorsport is here, from the early Alfas that dominated grand prix racing, to the Formula 1® cars of the last decade: which are hardly historic, but again look surprisingly old compared to the shrink-wrapped lines of the modern F1® cars. Even more dramatic than the evolution of cars is perhaps the evolution of tyres: a display in the upstairs part of the museum tells the story of the tyre from the crude earliest days of solid rubber affixed to wooden wheels, right up to the modern low-profile silhouette (invented by Pirelli for the Lancia Stratos) combined with lightweight alloy rims.

Pirelli announces its next 100-year deal
So there was no better place for Pirelli to invite the world’s media – and a handful of special sporting guests such as the legendary Alex Zanardi and McLaren’s Eric Boullier – to mark the company’s 110 years of motorsport. And the most prominent guest was probably the 1907 Itala driven by Prince Scipione Borghese, which won the Peking to Paris race on Pirelli tyres and started the whole story. As Pirelli’s vice chairman Marco Tronchetti Provera said: “We’ve been in motorsport for 110 years, and we’ll be here for at least 110 years more.”
That’s quite some commitment to motorsport, and the entire story is told in the Museo dell’Automobile: an obligatory stop during any visit to Turin (which, incidentally, is also where Pirelli’s Formula 1® compounds are made).

Read more
Related Stories
An Itala from Peking to Paris: story of the 1907 automobile race
race
110 plus
race
110 years from race to road
race
MOST READ
Supercars -
dream cars