Australia is well-known as an incubator of talent on two wheels but Bayliss, who celebrates his 51st birthday today, is perhaps the most-loved among fans. And there’s got to be a reason behind that… 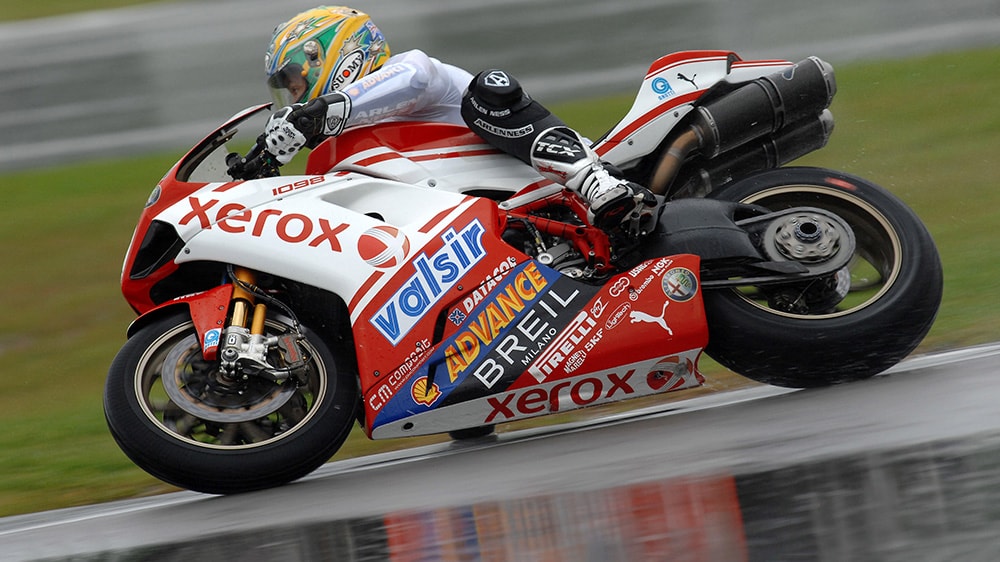 Happy birthday to Troy Bayliss, the boy who never grew up in the world of motorbike racing, who after taking three titles on the World Superbike Championship decided to continue in the Australian version of the production-derived championship until he was 50 years old. Now that he’s clocked up 51 years he’s decided to leave some space for his son Oliver who is only 16 years old but has the same spirit as his father – as well as the same passion for two wheels.

Troy Bayliss is a true Aussie from Taree: a small town on the mid north coast. He followed his dream to become a professional motorbike rider with patience and tenacity, only hitting the big time when he was 30 years old: the same age that many riders and other athletes are contemplating the end og their careers.

But that wasn’t the case at all for Bayliss. He got his very first motorbike when he was aged six as a present from his father and it was his father who was always by his side for the first few motocross and dirt track races, right up until he was about 10 years old. But in these demanding disciplines the young Troy didn’t quite manage to make his mark. So, in order to follow his dream without being a burden on his family. he decided to take a job aged 14 at a panel shop that specialised in spray-painting. This work experience (which was actually the only “real” job he had in his career) left a profound mark, and Troy was always known in the paddock as  ‘the panel beater’.

He slaved away in that workshop for nine long years until he managed to buy a Kawasaki 750, and then in 1992, at 23 years old, he went back to racing. First in the Australian 250SP championship with a Kawasaki KR-1 and then in the 600 class the following year, before joining the official Kawasaki Australia team in the national Superbike championship, where in 1996 he was classified third at the end of the season. The world suddenly began to take notice of this quick Australian and after moving to Suzuki Australia, he got the chance to shine by taking part as a wild card in the Phillip Island round of the World Superbike championship, finishing fifth in both races. In the same year and on the same track there was also a MotoGP round, where Bayliss finished sixth in the 250 class. That was enough to earn him a place in the closely-fought and demanding British Superbike Championship, riding a GSE team Ducati 996. After an initial learning season in 1999 he became British champion in the production-based series, which meant that he caught the eye of Ducati management, who sent him to compete in the AMA Superbike series the following year: the American national championship.

Troy’s once in a lifetime chance came in 2000, when Ducati brought him into the World Superbike Championship to replace none other than ‘King’ Carl Fogarty who had unfortunately injured himself and so was forced into retirement from racing. On his debut in Japan the 31-year-old Australian didn’t stand out particularly but the Italian manufacturer decided to give him a second chance at the ‘temple of speed’ in Monza. The weekend ended with two fourth places but above all a fantastic overtaking manoeuvre at the Prima Variante, where you arrive at 300kph after the long-start finish straight. There, Troy managed to power past Colin Edwards, Pierfrancesco Chili, Akira Yanagawa and Noriyuki Haga in one go, earning himself a place at Ducati for the following season.

The rest is recent history. Bayliss would win his first Superbike world title in 2001 before giving best to Colin Edwards from Texas the following year. After three unhappy seasons in MotoGP, in 2006 he returned to the production-derived championship (which in the meantime had begun an exclusive supply deal with Pirelli). Troy became world champion for the second time with the Ducati 999 aged 37, and it felt like poetic justice when Ducati called on him to replace Sete Gibernau at the final MotoGP round in Valencia. Bayliss set things straight by crossing the finish line first and beating his teammate Loris Capirossi. This made him the first rider in motorbike racing history to win at least one MotoGP round as well as one Superbike round in the same season. In 2008 Bayliss won his third and final title with the Ducati 1098R before retiring from racing as he approached 40.

Bayliss never forgot how difficult it was for him to accomplish what he achieved by following his dreams: especially in 2007 in Donington Park when a nasty fall meant that he sustained a painful injury on his little finger of the right hand. With an operation and a few races off the finger would have been saved, but the Australian wasn’t up for skipping races and missing out on points. Instead, he asked the doctors just to amputate the finger in order to recover quicker. Some people thought it was madness but it was a gesture that – along with his three titles – just added to Troy’s legend as one of the most loved and respected riders out there.

It was the same when in 2015 Ducati asked him to replace the injured Davide Giugliano in the first two World Superbike rounds in Australia and Thailand. Despite being nearly 46, Troy certainly didn’t hold back. Although he didn’t manage to get any top results, he showed everyone the extent of his passion once more, choosing to end his career aged 50 where it all began on the Australian Superbike Championship, which he still follows closely this year as his son Oli competes on it. The same passion for bikes has clearly been passed on from one generation of the Bayliss family to the next.

Read more
Related Stories
Pirelli confirmed Official Supplier for all classes of the Superbike World Championship until 2023
race
Ayrton Senna:
the springtime champion
race
Tim Gajser:
the predestined motocross rider
race
MOST READ
When the reality is more than we ever expected