Antonio Cairoli is the second most successful rider in the world in the history of motocross racing. Nine world titles achieved over a period of twelve years, in different classes and with different manufacturers, currently fighting to fulfil the dream of a coveted tenth world title. During his long career, Tony has always been able to face the many challenges and obstacles he encountered, getting up stronger than ever before thanks to the competitiveness and determination of steel that have always distinguished him. 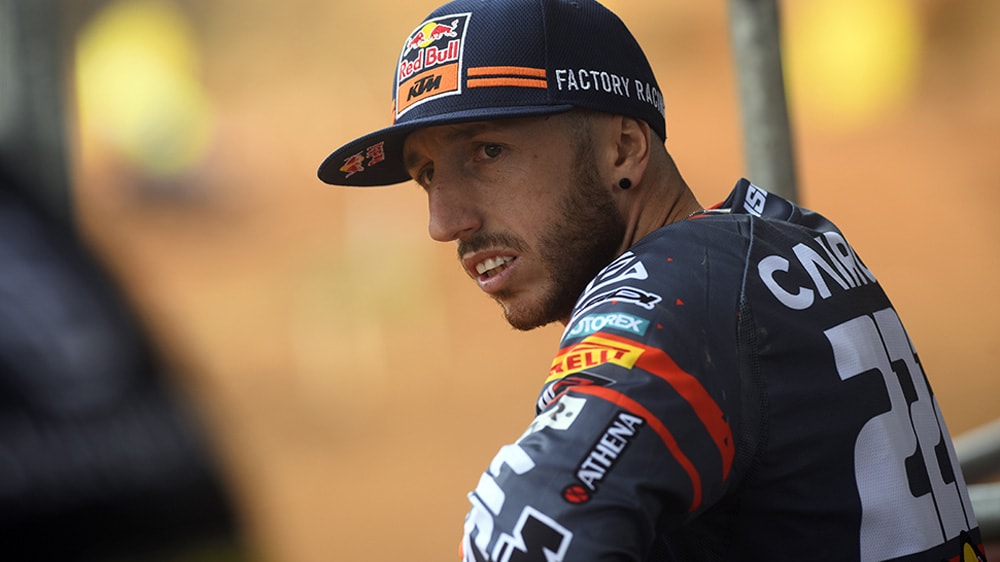 Tony is the youngest of the Cairoli family, born in Patti - a small town in the Sicilian province of Messina -, the first baby boy for the happiness of father Benedetto, who had a strong desire to pass on his two-wheel passion to a young male heir. Antonio gets on his minicross Italjet 50 for the first time at just four years old. The absolute passion that Tony had for his bike will prove over the years to fuel his talent and determination, allowing him to overcome with great determination any obstacle on his way to become one of the most successful motocross riders of all times.

At seven years old, he is able to participate in the first local and regional races, which he continually wins with ease. Tony's potential became extremely evident, as well as the need to leave his homeland in order to participate in the national championship. Despite his enormous talent, these are for Tony very difficult years in sometimes hostile environments, in which consequently he is unable to express his real potential.

Tony, however, does not give up and continues to work with determination his golden opportunity arrived in 2003, in the person of Claudio De Carli. The manager of the homonymous team, originally from Rome, is immediately impressed by the exceptional riding style of Cairoli and is determined to give him a chance. A few months of training in winter with a solid bike are enough and Tony has already managed to blossom into a rider ready for to challenge the World Championship.

2004 is the year of his debut in the World Championship: against everyone's expectations, considering the modest results obtained until that time, Tony is a revelation and ends the championship third in the standings. Antonio surprised everyone, if not even himself. His first GP victory is the one in the class MX2 2004 at Namur in Belgium, and is as well the one he remembers the most: to have the first victory on a historic track is something very special and is surely a well-deserved recognition of Tony’s immense talent.

The following year on a Yamaha, in 2005, Tony manages to take home his first World Championship Title in the MX2 category and will repeat this triumph after two years. In 2008 though Tony gets injured as he was at the top of the championship standings and is then forced to retire giving up the title. But in 2009 the comeback, it is the year of his MX1 debut, riding on the Yamaha during what will be his last season on the Japanese bike. He wins his first race in the premier class in the third round of the season and takes the MX1 World Champion Title with still one race to go.

From 2010 Cairoli joins the Austrian KTM team, equipped with Pirelli ScorpionTM motocross tyres, and between speed, sweat and glory, words he himself uses to define his career, Cairoli becomes the strongest rider ever in the MX1 category since it was established in 2004, and the first rider to win in the premier class with take a 350cc motorcycle. Five consecutive world titles are achieved from 2010 to 2014, interrupted by the season of transition from 350cc to 450cc, as he is the victim of a severe injury that forces him to miss most of the races.

He returns in 2017, absolutely stronger and more competitive than ever, with that determination and strength of spirit that have characterised Tony since he was a little child. He goes on to win his ninth world title in Assen with a race to spare. In the same year, Tony marries his Dutch girlfriend Jill Cox, who has long been by his side in moments of joy as well as being of fundamental support in the most difficult moments of his career. 2018 sees him finish the championship in second position behind his teammate and in 2019 he was forced to abandon the championship due to an injury that required a shoulder surgery. He is successfully back in this 2020 season and if he will react as he has always reacted to the challenges that life has presented him, he will rewrite history again. Will he be able to win his tenth world title this year? The Championship is still open and anything can happen.

For the moment, we send him our warmest wishes for a Happy Birthday!