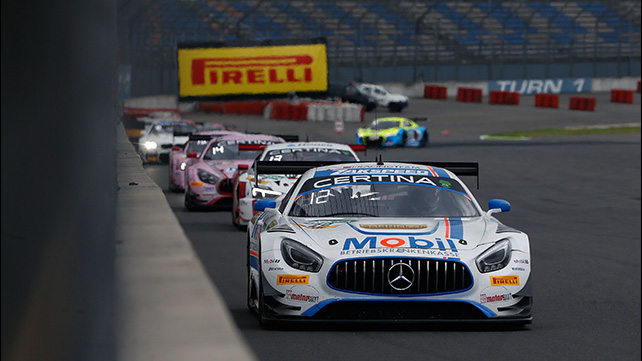 56 pilots open the throttle, again! In the current season of the ADAC GT Masters 2017 the fans experience motorsport at its best. A top-class grid with 17 teams and 28 supercars from seven automakers (Audi, BMW, Corvette, Lamborghini, Mercedes-AMG, Nissan and Porsche) guarantee excitement and entertainment. Since 2015 Pirelli is exclusive tyre supplier for the German league of superportscars, too.

In the first four races of the eleventh season of the ADAC GT Masters 2017 four different driver duos were already at the top of the podium. This proves the high power density of drivers and vehicles this year. During numerous duels on the track, the pilots regularly get everything out from the P Zero racing tyres, which show absolute ultra-high performance.

In addition, for free practise the teams can nominate two sets of used tyres per car that those car had driven at a previous event. If it rains, the Pirelli rain tyres will be used.

This year there are still five race weekends with a total of ten races in Germany, Austria and the Netherlands. The next racing weekend of the ADAC GT Masters will take place from 9th to 11th June at the Red Bullring in Spielberg, Austria.

In addition to the ADAC GT Masters, Pirelli also supports numerous other prestigious GT racing series, including the most popular championships in Europe and the USA, as well as prestigious races on legendary tracks such as Bathurst and Macau.

Read more
Related Stories
Hunting Supercars at the Blancpain GT
race
Prototype racing crosses the English Channel
race
The charge of the young bulls
race
MOST READ
Jacques Villeneuve,
the rising and setting of the son