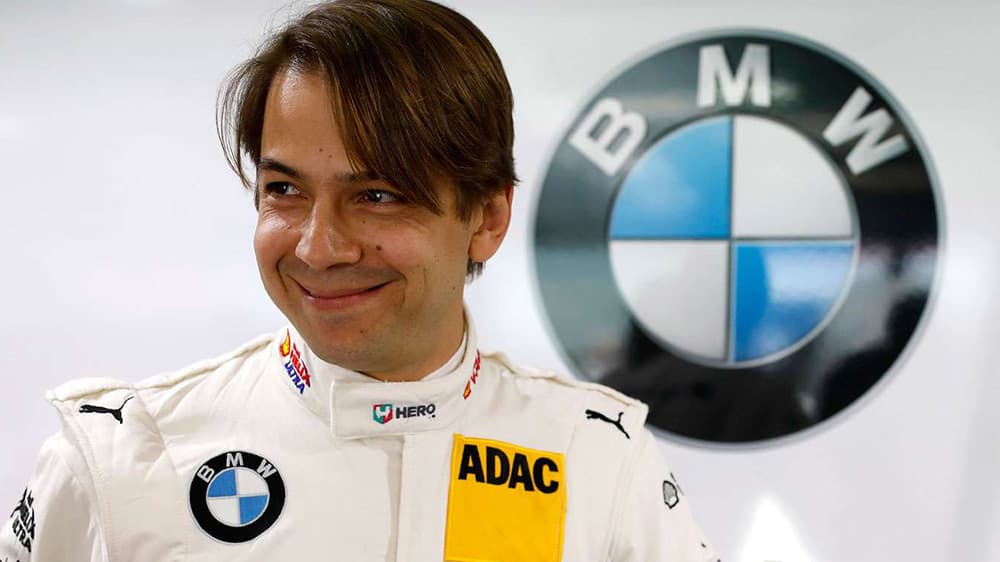 Charly checks out
For Augusto Farfus, winning the FIA GT World Cup was an emotional occasion, and you didn't have to look very far to understand why – just as far as the end of the bonnet on his BMW M6 GT3. The legend ‘Thank You Charly’ was written on it, as legendary Schnitzer team manager Charly Lamm, a regular fixture at the team since the 1970s. would retire after Macau. Farfus was determined to give him a send-off that he would remember.
“In some ways that did increase the pressure a bit, because I really wanted to do well for Charly,” said Farfus. “But I knew that we had a really fast car, and when we were able to come through from second and win the Qualification Race on Saturday, that was a really important moment. We’d worked on the car and made it better throughout the weekend. So to win the FIA GT World Cup and honour Charly in this way was a very special moment for me.”
The Swiss team manager was understandably moved after the 18-lap race, having seen Farfus win from pole and see off the attacks from his rivals, with the M6 holding an advantage on the rapid straights but looking more vulnerable on the twisty mountain section.
“It was an incredible race, so to finish my career in this way was just perfect: especially here,” said Lamm. “I first came to Macau when I was still a student, and I’m sure I’ll be back next year – only this time, as a tourist!”

29 years ago to the day
There was another reason why Farfus enjoyed his Macau win so much: it took place 29 years to the day since his motorsport career got underway, back on minibikes in his native Brazil.
“Back then I was just a kid with lots of dreams, and I had no idea what this life would have in store for me,” said Farfus. “To win a world championship 29 years later feels pretty incredible, and I’m just very thankful.”
Farfus, now aged 35, was born in Curitiba and has driven for BMW since 2007 across a variety of disciplines, including the FIA World Touring Car Championship and DTM. He last won the Guia touring car race in Macau in 2009, but this was his first victory in the GT category.
And there could be a few more of the same. Next year, he’ll be leaving DTM behind to concentrate exclusively on BMW’s GT racing campaign. This means that he will continue the relationship between BMW and Pirelli, with the latest M5 road car – a car widely recognised as being the ultimate sports saloon – also running on specially-developed P Zero tyres as original equipment. That’s just one way in which BMW and Pirelli are together both on the road and the track.
“We came to Macau with only one car and a small team, but Schnitzer and BMW has always worked incredibly efficiently,” added Farfus. “The result was our first win in the FIA GT World Cup – and I don’t think there has ever been a closer GT race here.”

Too close to call
He’s right. The top three cars were covered by less than a second at the finish and no one manufacturer enjoyed a particular advantage. This was despite the fact that – unusually for Macau – there wasn’t even a safety car to bunch up the field. Here’s another indication of just how close it was: four of the five manufacturers represented at Macau topped either a session or a race throughout the weekend. When the chequered flag fell on Sunday, there were also four different manufacturers in the top five, from a 15-car field.
“The start was always going to be crucial, as while you can overtake in Macau, it’s really tricky,” said Farfus. “I was fully committed into turn one, then I just kept that focus for the entire race. It was a magical weekend.”
There’s nowhere else like Macau in the world, with so many drivers – including many at the top of Formula 1 – describing it as their favourite circuit. The 2018 competition was the ultimate GT race held there to date – won by the ultimate driving machine.

Read more
Related Stories
The new wave from Asia meets the giants of the west at the Macao GP
race
The rookie
and the expert
race
Barcelona GT Series – In the hidden heart of Catalonia
race
MOST READ
Pirelli: employees in Italy donate over 7,000 work hours to support Milan’s Sacco hospital