Ex-Formula 1® driver Erik Comas is competing on the European Historic Rally Championship this year with an astonishing Lancia Stratos. He tells us about his heroes

Stratospheric performance
It’s been called not just the most beautiful competition car of all time, but also the most beautiful car of all time, period. The Lancia Stratos, with a V6 Ferrari Dino engine at its heart, was designed for competition and only then adapted for the road, in a perfect example of form following function. In the same way, Pirelli was asked to create bespoke tyres for the Bertone-designed car: the resulting P7 became the world’s very first low-profile tyre – to improve handling – which is now the industry standard for high performance.
The car won three world rally championship titles in the 1970s and continued to win right up until the 1980s: its last world rally win was the 1981 Tour de Corse, in the hands of Frenchman Bernard Darniche.
And it’s another Frenchman who is ensuring that its competition legacy lives on. Former F1® driver Erik Comas is using a Pirelli-backed Stratos on the FIA European Historic Rally Championship this year, running on P7 Corsa Classic tyres: an updated version of the originals.
Even though the championship is open to cars manufactured right up to 1989, Comas and his stunning Stratos have every possibility to star at the front. The principles that guided the car when it was announced in 1970 – minimal mass, direct handling, perfect weight distribution and a low centre of gravity – are just as valid now as they were back then. 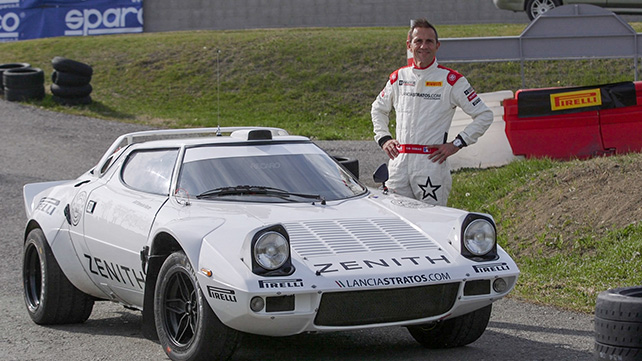 From grands prix to special stages
Although Erik had a successful career in Formula 1®, completing four seasons from 1991 to 1994, he always wanted to be a rally driver. Now, at the age of 53, he has realised his ambition in the car of his dreams. For Comas, it’s not just about the aesthetic appeal of the Stratos and the luxuriant melody of its V6: as alluring as they both are. Instead it’s about the landscapes and traditions of rallying too; the adventures both on a sporting and a human side that only the world of rallying can offer.
Erik was just 10 when he first fell in love with the Stratos, but he eventually embarked on a circuit racing career as his parents thought that this would be safer. Yet he finds a lot in common between the powerful, single-seater racing cars that he drove back then and the Stratos now: both rear wheel drive, with more power than grip. As Erik is able to artfully demonstrate by power-sliding the car through the corners of the Castelletto di Branduzzo circuit, close to Milan in Italy, where he tested the Stratos prior to the season start…

Hero of heroes
While the Stratos is the car that has inspired Erik most in his career, there’s no question about the person who inspired him most. That’s Ayrton Senna, who probably saved Erik’s life when he crashed his Ligier heavily in practice for the 1992 Belgian Grand Prix, at one of the fastest sections of the track near Blanchimont.
Erik was knocked briefly unconscious and Senna was the only driver who stopped. The Brazilian managed to switch off the Ligier’s engine – which was still running at full revs – thereby averting a potentially disastrous fire, and held Erik’s head stable until the emergency services arrived. In a sad twist of irony, Erik tried to do the same for Senna less than two years later at Imola ¬– but on that occasion there was nothing to be done. Erik was too upset to re-start the race at Imola, and he retired from Formula 1® at the end of the season.
“Ayrton will always be my hero forever,” points out Erik simply; the special bond between them still clear today. Just as there’s a unique relationship between Erik and his Lancia Stratos.

Read more
Related Stories
“Car lovers love customising their cars”. Interview with Emerson Fittipaldi
race
An eternity in four seconds
race
The wait is finally over
race
MOST READ
Getting the show
on the road