The Pirelli P Zero trofeo r: to the clouds with the Urus

On the climb to Pikes Peak, the upgraded Lamborghini Urus conquers the 156 bends with Simone Faggioli behind the wheel 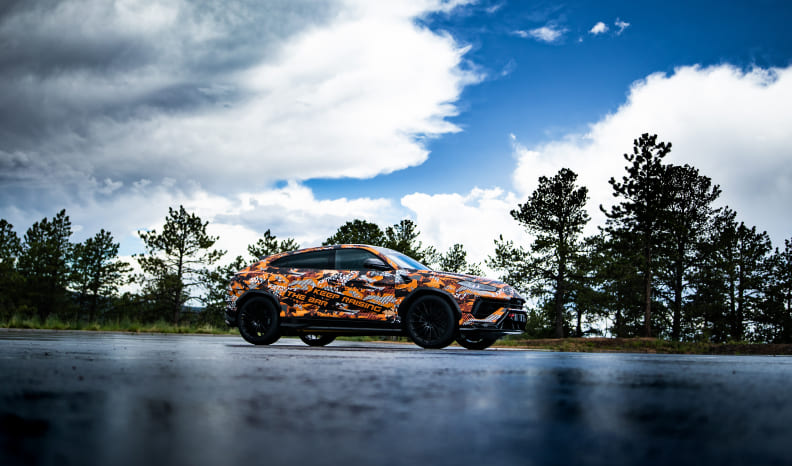 The Lamborghini Urus that set the new record for standard production SUVs in the timed Broadmoor Pikes Peak International Hill Climb in Colorado on 10th August donned a new evolution of the P Zero Trofeo R tyres, designed and engineered specifically for the needs of the muscular sports utility sporting the House of the Raging Bull's coat of arms.

The new Lamborghini Urus has not yet had its official première, so it tackled the climb of the most well-known and exotic uphill speed race in the world outside the official rankings. This did not prevent the driver Simone Faggioli, an international many-times champion of uphill races and test driver for Pirelli, from reaching the Pikes Peak Hill climb finish in 10’32”064, breaking the previous record for SUVs claimed in 2018.

The record uphill time trial clinched by Lamborghini-Pirelli took place on the exact same route as the race: the famous 156 bends that wind through 20 km uphill at the top of the Eastern Rocky Mountains, with an average slope of 7% (maximum of 10.5) and a drop of 1439 metres to the crazy finish line at an altitude of 4302 metres above sea level. An exceptional race, the Pikes Peak, known as the Race to the clouds, which has been completely asphalt-covered since 2012 and has celebrated its 100th edition, making it the longest-running American race after the Indianapolis 500. A long history of exceptional competitions, won in the past by world-famous major motorists such as world rally champions Walter Röhrl, Ari Vatanen and Sébastien Loeb. For years, the Colorado race, which also symbolises the greatest risk given the total absence of guard-rails or any other type of protection along the route, has been attracting SUVs. The new record of the Lamborghini Urus fitted with Pirelli tyres is therefore destined to be challenged from the next edition onwards.

For the Lamborghini Urus, driven beyond the clouds of Colorado, powered by a twin-turbo V8 engine as standard and modified to comply with the technical-sporting regulations of the Pikes Peak International Hill Climb, the new Pirelli Trofeo R is ‘tailor-made’ for the requirements of the SUV from Sant’Agata. This evolution of the widely used Trofeo R is the first semi-slick tyre by Pirelli that is explicitly made to the specific characteristics of an SUV. The new tailor made tyre provides the Urus with increased versatility to meet different latitudes of environmental and road surface conditions, with maximum traction, braking and cornering performance at the most extreme ambient and road surface temperatures, meeting all driving needs from hot to cold and on both dry and wet terrain.