The latest Formula 1 car and tyres, which will be used from 2022 onwards, was previewed before the British Grand Prix. We were there... 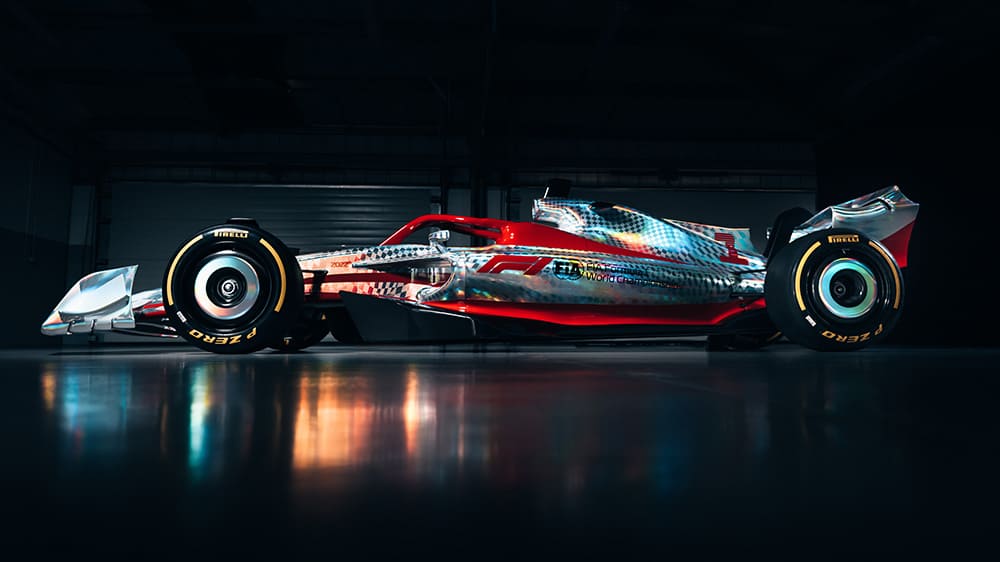 Seeing into the future

It’s not always that you get a real glimpse into the future, but that’s what Formula 1 provided before the start of the British Grand Prix, with the reveal of a full-size 2022 Formula 1 car for the first time.

Next year marks a brand new chapter for the sport, with the introduction of a ground-up technical formula that’s designed to make the action even more exciting and engaging. How? Principally by reducing the sensitive aerodynamics of every car, so that they can actually race close to each other without being affected by the ‘dirty air’ of the driver in front.

With less downforce, the drivers have to find the grip from somewhere else. Their own skill, certainly, but also the tyres – which become considerably bigger next year as the diameter grows from 13 inches (the default size for Formula 1 since the 1960s) to 18 inches, with low profile sidewalls.

There are several effects to this change: the car becomes more planted to the road during corners and the handling is more precise, with the tyres flexing less. This actually helps the overall aerodynamic balance of the car as well, because the new tyre doesn’t substantially change shape even when subjected to extreme loads.

It’s not just the size of the tyre that has changed but the compound and structure as well. So it really is a brand new start in 2022.

There’s another important aspect to the new car and tyres, which is aesthetics. The new cars have a futuristic look to them: like a cross between a fighter plane and a space ship. The angles are more aggressive, the curves more pronounced, the whole look just cleaner and sleeker.

These cars may generate less downforce, but they look a lot more streamlined. And part of that thoroughly modern look is down to the tyres, which now have the low profile look associated with modern supercars. Ironically, there’s nothing particularly new about low profile tyres though as they have been around since the 1970s: originally, they were developed by Pirelli for the Lancia Stratos to go rallying. Since then, low profile tyres have been standard for all high performance cars – apart from Formula 1 that is.

All this now changes, with F1 brought completely up to date thanks to an exciting new look that puts the accent on sustainability, safety, and affordability as well as technology. These changes were actually planned for this year already, but the Covid-19 pandemic pushed the project back by one season.

This time, there will be no delays. These are the cars and tyres that will definitely line up on the grid to start the 2022 season, ready to entertain a new generation of fans.

In other respects, some things haven’t changed. There will still be five compounds throughout the 2022 Pirelli F1 P Zero range, and three of them will still be selected for each race. This approach, pioneered in 2016, has helped to shake up strategy, but the new cars should provide even closer wheel-to-wheel racing, which translates into better entertainment for the fans – and makes race tactics even more critical to gain an advantage.

Interestingly, Pirelli is now the only tyre manufacturer that has been involved in Formula 1 throughout every different generation of tyre: from the 1950s, when the tyres were tall, skinny and narrow, to the 13-inch size that took hold from the 1960s, to the very latest 18-inch tyres that will now make their debut next year in Formula 1 (having already raced successfully in Formula 2). The drivers, who were able to inspect the new car for themselves at Silverstone, can't wait to get started.

Next year has been described as a technical revolution in Formula 1, with the sport going back to its essence while embracing the latest opportunities. The Pirelli P Zero Formula 1 tyres that will race on into the future are no less revolutionary. Enjoy the show.