The laps
get hotter 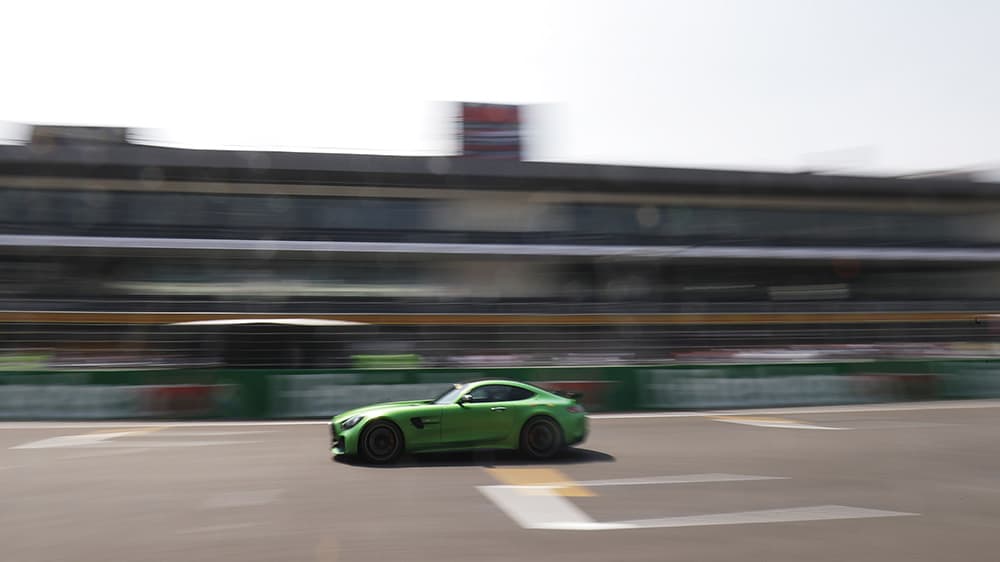 From track to road
One of the concepts that Pirelli talks about most is ‘track to road’ – but what does that actually mean? After all, you can’t actually take a Formula 1 car onto the road (unless you happen to be somewhere like Monaco or Singapore for the grand prix weekend, in which case it’s actively encouraged).

But a key initiative from Pirelli together with Formula 1’s promoter illustrates perfectly what we mean by technology transfer from track to road. And after a successful debut last year, it’s back and even better in 2019. Welcome to the F1 Pirelli Hot Laps programme, starting at the Chinese Grand Prix.

Hot Laps give ordinary people a chance to experience what it’s like to be driven flat-out in a supercar by a grand prix driver on the actual circuit during the race weekend. In other words, a unique perspective on the pinnacle of motorsport.

The idea is capture the essence of performance: not only from the supercars themselves, but also from their P Zero tyres, which are developed from the experience honed on race tracks. At grand prix weekends, these famous tyres for the road get the chance to come home.

Road-going supercars come to F1
It’s also an opportunity for the many car manufacturers involved in Formula 1, as engine suppliers, teams and partners, to showcase the brilliance of their products in the environment that inspired them, as well as associating the global gladiators that are F1 drivers with the cars they are there to promote.

Seeing so many F1 drivers display real-world skills at the wheel of road-going supercars is something that had not been done since the 1980s, when BMW supplied a fleet of modified M1s for the Procar championship, which formed part of the support race package for the 1979 and 1980 F1 world championships. As unbelievable as it sounds in today’s world of zealously-guarded contracts, drivers from nearly all the teams used to happily jump into the BMWs as a warm-up for the grand prix on eight European rounds. Niki Lauda won the inaugural 1979 season, while Nelson Piquet was champion in 1980.

Commercial and contractual realities bit from 1981 onwards: Procar was quietly moved elsewhere and so we were denied the opportunity of seeing what F1 drivers can do in supercars that we recognise. Until Pirelli and hot laps came along.

More manufacturers
The manufacturers taking part in the F1 Pirelli Hot Laps programme this year once again include Aston Martin, McLaren and Mercedes – but there are also a couple of new manufacturers joining in: more details to follow.

These cars are all very different, but one thing they have in common is Pirelli P Zero tyres as original equipment: as is the case for the majority of the world’s supercar manufacturers.

As Pirelli’s head of car racing Mario Isola – who himself originally started his career as a test driver for high performance tyres – points out: “This latest initiative allows us to demonstrate the performance and technology of our road car product on the actual circuits used in Formula 1 with the best drivers in the world. We talk a lot about motorsport being our ultimate development tool: now everyone can see that for themselves.”

Here are the 10 races where you can see Hot Laps in action this year:

Read more
Related Stories
Formula 1 in China:
the 1000th grand prix
race
Fanning
the flames
race
Middle East:
the new epicentre of F1
race
MOST READ
Getting the show
on the road