The impeccable victories of Tony Cairoli

For the ninth time the Italian from Patti, Sicily has been crowned the Motocross World Champion on his Pirelli-equipped KTM 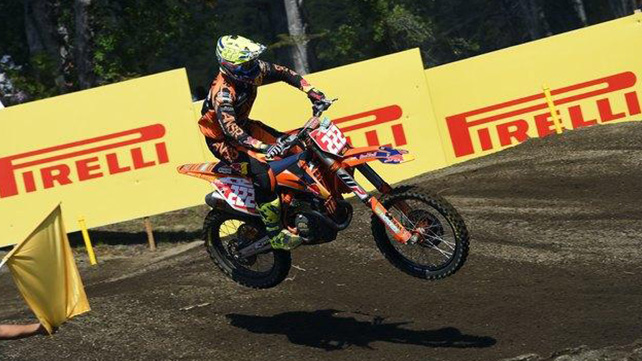 Tony Cairoli is back. The motocross rider has been crowned the FIM Motocross World Champion for the ninth time. This is an incredible achievement for one of the all-time most successful riders in the history of this sport. On his Pirelli-equipped KTM, in Assen, Holland, Cairoli celebrated his victory in winning the title at the end of a flawless season in which he had a near perfect track record.

"Coming back to win the world championship after two seasons is something altogether fantastic. The whole team and our technical partners deserve special thanks" said the champion. With this success, Pirelli – also thanks to its SCORPION™ MX tyres – has become the most successful tyre brand in motocross history.
Cairoli's story goes way back. When he was four years old, little Antonio started to take his first rides on an Italjet 50 minicross bike through the narrow streets of Patti, a municipality in the province of Messina, Sicily. His passion for motorbikes was passed down to him by his father, Benedetto, who would take him to the circuit close to his home, where Cairoli would ride for hours.
Right from the very start his talent was clear for everyone to see. He won regional competitions, until he ranked at a national level. In 2001, his dream would come true: he raced in the 125cc class of the Italian Motocross Championship. This is where his partnership with Pirelli came about, which would last for many years and lead to many successes and trophies. "It's my first memory of Pirelli. For me it was a novelty to have new tyres every time I hit the track. It was something that I had dreamed about forever".
His first world title would arrive in 2005 in the MX2 class at the tender age of just twenty years old. Cairoli was predestined. His successes are always accompanied by the number 222. "I chose that number for several reasons. In 2004 when I arrived at the world championship, the main rider on the team was Claudio Federici, who raced with the number 22. We decided to add an extra 2, hence 222. Later I also realised that the chassis number of my first minicross motorcycle was 222. It was destiny and it's become very important to me".
Like every great champion, Cairoli is not yet satisfied with his trophies and wins. His desire to do better is the greatest driver that gets him back in the saddle. "I feel like I still have a lot to give. When I realise that I'm struggling or I start to have problems, then I'll call it a day. For the moment, I want to keep going".
Compared to when he started out, for Cairoli motocross has changed. From media interest to technology, this sport has evolved greatly. "The professionalism of the teams has increased a lot and this can be seen from the facilities in the paddock. Motocross has also grown due to the presence of major sponsors. I think all of this is great".
While it seems his future will still have him in the saddle (to the joy of his fans), in the little downtime Cairoli has, he loves to distance himself from motocross. To detach completely and focus on something else altogether. For this Sicilian, the call of the sea is too strong for him to ignore. "As soon as I can, I love to go fishing or sailing. It helps me to relax and not think about the bike".
However, throughout all the years spanning his career, if he had to choose a special win, there are no doubts in Cairoli’s mind to which one it would be: Namur 2004. "Without a doubt, it is the win that gave me the most satisfaction on a historic track. I was coming from participating in the Italian regionals and championship the year before with poor results. At a national level I certainly wasn't in the top five. Winning my first Grand Prix at such a young age was an incredible feeling. I'll never forget it".
Thirteen years later the story hasn't changed. The rider is still here to celebrate and set new records. Always with his trademark passion and proper respect for his components. "It's normal that there is a lot of competition on the track. Off the circuit, however, we're on great terms. In fact, some of my best friends are actually riders".
In the future he might try his hand at four wheels. Cairoli has already done a few races and who knows if we'll soon see him on the track. One thing is certain though, all there is to do now is enjoy the victory of his ninth world title. The racer still has a lot to give to this sport. His opponents have been warned