The heroes of the Blancpain GT Series: both human and automotive

So, you know a bit about the Blancpain GT Series? Now it’s time to meet some of the stars of the show 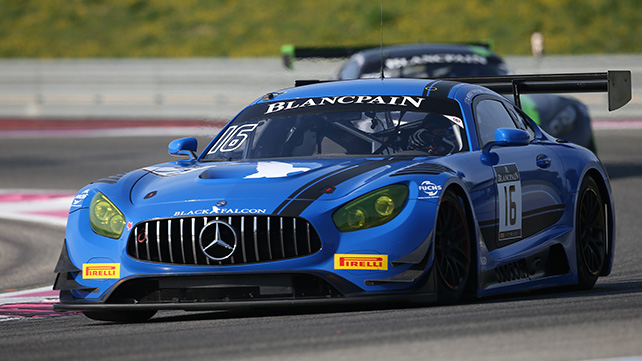 From James Bond’s car…
The 2017 Blancpain GT Series gets underway this weekend at Misano, and once again Pirelli lights up the action with some amazing associations as sole tyre supplier.

The grid is made up of some of the most prestigious car manufacturers in the world. Although these competition cars are slightly different to their road-going equivalents, one of the many things they have in common is a Pirelli tyre, as the Italian brand is synonymous with prestige marques both on the road and track.

These leading brands are represented by top teams, who have carved out a reputation for excellence at the highest levels of professional motorsport. Among the teams competing for the title, for example, is Bentley Team M-Sport, fielding two examples of the Continental GT3. One car has an all-British line-up that carries on the spirit of the ‘Bentley Boys’ who dominated Le Mans in the 1920s. The other features up-and-coming international stars plucked from key single-seater and touring car championships. Then there’s Aston Martin of course, which most people believe to be James Bond’s car of choice. But in the first Ian Fleming books, 007 actually drove a Bentley Continental.

If the James Bond novels were being written now, he’d probably drive a McLaren. The cutting-edge British manufacturer has a stronger presence than ever on the Blancpain GT Series this year, with a mixture of established stars such as Alvaro Parente and young protégés who made their names in karting like Ben Barnicoat.

…to the battle of the German giants
Mercedes is represented by Mercedes-AMG Team HTP Motorsport, backed directly by the factory and ultimately overseen by Toto Wolff, who heads up the manufacturer’s dominant Formula 1® team as well. Among the Mercedes driver line-up this year is former Macau Grand Prix winner Edoardo Mortara, poached from Audi at the end of last season, and Maro Engel: the most recent winner of the Nurburgring 24 Hours in Germany.  The AMG GT3 went fastest overall at the pre-season Paul Ricard test and looks like the car to beat.

One of the most respected private Mercedes teams in the world is Black Falcon: they formed an unlikely yet eye-catching partnership with American rock band Linkin Park at the Spa 24 Hours last year, underlining the universal appeal of the Blancpain GT Series. Even for rock stars.

A fierce battle rages between the German prestige manufacturers of course: Audi has enjoyed phenomenal success with its R8 LMS, topping the times on the first day of testing at Paul Ricard. The German giant, represented on the Blancpain GT Series by Belgian Audi Club Team WRT among others, has a stellar roster of factory drivers to call upon: such as DTM star Jamie Green, and up-and-coming single-seater racer Jake Dennis.

And then of course, there’s BMW. The brand new M6 GT3 won the Spa 24 Hours last year – the most demanding race on the calendar – and comes back in 2017 with a driver crew that includes former Red Bull F1® test driver (and last year’s Macau Grand Prix winner) Antonio Felix da Costa.

And the Italian horses. Not to mention bulls.
You’ve had the British, and the Germans. Now meet the Italians. Two of the most soulful marques on the Blancpain GT Series are of course Ferrari and Lamborghini, which need no introduction. Present at the Paul Ricard test was Ferrari factory driver, and former F1® star, Giancarlo Fisichella. Ferrari introduced its stunning 488 GT3 last year, run by famous teams such as AF Corse and Kaspersky Motorsport.

But the Prancing Horse has to cope with the charging bull: namely Lamborghini, another traditional partner of Pirelli both on the road and track (every single Lamborghini leaving the Sant’Agata factory since 1968 has done so on Pirelli tyres). The Huracan GT3 is a mighty contender, especially when combined with drivers of the calibre of Marco Mapelli: who recently broke the production car lap record at the Nurburgring Nordschleife, using specially developed Pirelli tyres on a road-going Huracan Performante.

Or other beasts?
The list of animals doesn’t stop there: you will even find a Jaguar among the entrants, run by a private Swiss team and driven at Paul Ricard by yet another former F1® driver, Christian Klien.

But the most impressive creatures are always the drivers themselves. The Blancpain GT Series has been fortunate to welcome some giants of motorsport into the driving seat: legends such as Valentino Rossi, and more recently Alex Zanardi. In terms of star names, both on the cars and the overalls, few other championships come close.

Read more
Related Stories
What is the
Blancpain GT Series?
race
The Bernie Ecclestone of GT Racing? Not quite
race
Drivers and cars
with stories to tell
race
MOST READ
Getting the show
on the road