It’s hard to put into mere words just what the Spa 24 Hours actually feels like. ‘Epic’ could be one of them. But this year’s race was the toughest yet. 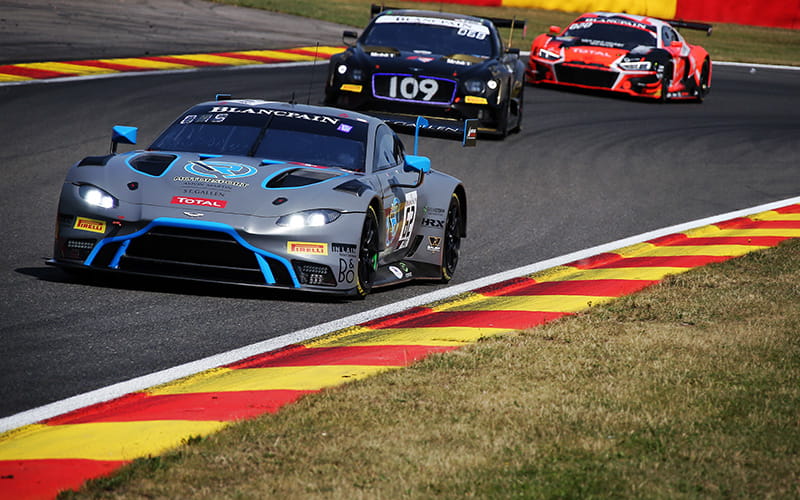 The lap of the Gods

The Spa 24 Hours is one of those races that drivers keep coming back to, despite promising themselves each year that this will definitely be the last one. But even the people who were absolute veterans of the Belgian classic agreed that this one was crazier than anything they had ever seen before.
In the days leading up to the 24 Hours, there had been temperature records set all over Europe. From out of nowhere, Spa suddenly became a sauna. Then, on race day, everything changed.
The epic 7.004-kilometre Spa-Francorchamps circuit, also used for the Belgian Grand Prix, is set in the foothills of the Ardennes: a place that’s just as famous for bad weather as it is for pâté and Trappist beer.
But nobody could have predicted the sheer climatic carnage that characterised this year’s race, with a succession of safety cars and yellow flags that led to a stoppage of nearly six hours on Sunday morning, when the rain just got too much to cope with. In total, there were just 11 hours and 38 minutes of uninterrupted green flag running from Saturday to Sunday.
“In all my career, I’ve never seen conditions like it: just two metres of visibility in some places,” commented Kevin Estre, who formed part of the winning Porsche crew.
The 2019 Spa 24 Hours was truly an ordeal by fire and water. And yet the drivers continued to pound out the laps: through rain, fog and mist; during the day and through the night. This was racing at its purest, with the famous crest and compression through Eau Rouge and Raidillon feeling like a punch in the guts every time. Truly, a lap of the Gods.

While bad weather is entirely predictable at Spa – the forecast throughout the 24 hours was about as reliable as a politician’s promise – one thing you don’t tend to see there is a small accident. And that proved to be the case again this year, when a number of drivers found out the hard way just what an unforgiving place Spa is: thankfully without injury.
With a record field of 72 cars (and a record number of Pirelli tyres brought to the event: 15,000) the fight was truly gladiatorial. In total, just 51 cars officially saw the finish, in various states of disrepair. The most well-used item in the tool kit of any team at Spa is race tape: the black tape that acts as instant band aid for all the injuries sustained in 24 hours of automotive combat. A lot it was used this year.
While many people think that race cars look their best while glistening new, straight out of the box, that’s actually not true. Instead, they look at their magnificent best when dirtied, bruised, and taped – like prize fighters who have just emerged from the boxing ring. Every scar tells a story; the Spa 24 Hours is not a place for those lacking in confidence. Here, racing is definitely a contact sport.

Just getting to the finish is an achievement: especially in the diabolical conditions seen this year. And for the first time since 2010, the overall winner was Porsche (for the seventh time at Spa) with 911s finishing first and second, contributing to a total of five Porsches within the top 10. One of the reasons why is that Porsche is always superlative in the wet, with the combination of rear-wheel drive and a rear engine providing the best possible traction. And of course, Pirelli tyres – which are fitted to road-going Porsche 911s as well – also make a difference. Both the wet and slick tyres were used, in roughly equal measure, as it was just impossible to predict what the weather would do.
“I was actually surprised by the amount of grip that was available,” said Michael Christensen, who drove the winning car together with Kevin Estre and Richard Lietz. “Even in wet conditions with slick tyres it was driveable, which isn’t normal!”
Incredibly, 24 hours after the race started, their Gulf-liveried Porsche crossed the finish line on Sunday only 3.347 seconds ahead of the second-placed car. The winning team had only been put together at the last minute, and it was Porsche’s ‘joker’ entry, which was never really meant to win. Yet win they did, in the most incredible way. That’s why all the drivers keep coming back, year after year...