The ADAC GT Masters: welcome to the league of supersportscars 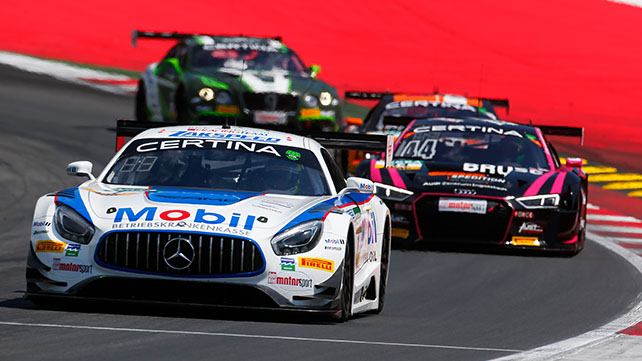 The series` starting grid is impressive in 2016. 19 racing teams field more than 30 supercars. The tenth season of the ADAC GT Masters is characterized by one thing in particular – a plethora of new vehicle models. Six supercars – the Audi R8, BMW M6, Corvette C7, Lamborghini Huracán, Mercedes-AMG and Porsche 911 – are jockeying for position on the grid as they tackle their first full season in the ADAC GT Masters. The new models are joined by well-known supercars like the Bentley Continental, Nissan GT-R and Corvette Z06.R. For each car two drivers have been nominated, which alternate at the wheel during a race. For this, a mandatory pit stop between the 25th and 35th round is designed.

As different as those supercars of eight manufacturers might be, they all have one thing in common: they race exclusively with Pirelli tyres. Their various vehicle concepts are challenging for the manufacturer. But due to many years of experience in the GT3 the Italian company possesses the necessary knowledge. In addition, Pirelli equips many series models of those vehicles that start at ADAC GT Masters. Therefore, the technicians of Pirelli know the individual parameters of the models very well in detail.

For each race weekend Pirelli supplies 500 tyres. For the sessions of free practice, the qualifying and the races of an event each vehicle receives three sets of new tyres. For practice sessions each team may nominate two sets of used tyres that have been assigned to the vehicle at a previous event. While the number of full wet tyres is not limited.

Pirelli has specifically designed a full range of products for GT3 cars that are suitable for use during endurance and sprint races such as ADAC GT Master. Every car is equipped with the tyre sizes that best suit their architecture and allow them to get the best performance. Pirelli works in direct connection with the car manufacturers to define the best fitment, which is known as Pirelli’s “perfect fit” strategy that applies from road to track. For sporting equity, Pirelli proposes a small catalogue of products with a very wide range of use that is easily adaptable to the different cars.

Performance, reliability, consistency, adaptability and ease of use by both professional drivers and amateurs are the features that characterize the P Zero slicks used at ADAC GT MASTERS. As is the case for Pirelli’s P Zero road cars tyres, these make use of high technology and the most advanced production techniques.

After four of seven race weekends there is no doubt - the racing series presents itself at its best. The events at the Motorsport Arena Oschersleben, Sachsenring, Lausitzring and Red Bull Ring left nothing to be desired. The next two rounds of the ADAC GT Masters will take place at the famous tracks at Nürburgring (Germany from 05. – 08. August) and  Zandvoort (Netherlands from 19. – 21. August).

Regarding tyres the Nürburgring is a very demanding track. Speed and the radius of the corners are multi-variant. The circuit has some hard braking areas and tyres are quite stressed while driving over the curbs. This is aggravated by the unpredictable weather at the Eifel region. But up to now all races of ADAC GT Masters have shown that Pirelli tyres work well under all circumstances.

The ex-Formula 1® circuit at Zandvoort, situated on the Dutch coast of the North Sea, delivers a unique challenge for the tyres provided by Pirelli. Firstly due to its geographical location in the middle of the sand dunes, which means that sand can blow onto the track surface. Secondly, being on the coast, the area is subject to a lot of varied weather. This leads to a rougher grade of Tarmac compared to other events that the GT Masters series has visited this year. As a result the grip levels are constantly changing. This can affect tyre wear if conditions are on the cooler side: especially when you consider the high speeds and considerable loads caused by the banked turns, as well as the big changes in elevation throughout the circuit.

Stunning supercars and thrilling races: Even in 2016 ADAC GT Masters is convincing as a league of supersportscars.

Read more
Related Stories
The art of being
everywhere at once
race
Pirelli World Challenge®:
a North American Circuit Battle Royal
race
A Spa break
with a difference
race
MOST READ
Jacques Villeneuve,
the rising and setting of the son