Before 2005, it seemed just a utopia. Today, it is a major reality: the Porsche mono-marque championship is growing constantly, with Pirelli as its exclusive tyre supplier since the start 10 years ago. And it is a competition that sometimes hosts a few special drivers

Nothing strange about that for a Hollywood star. But if the star has to fight it out in a real Grand Touring race against a grid full of professional racers, that could be rather odd.

No, and it’s not the trailer of a film about motor racing. It’s all true, and it happened in 2014: Patrick Dempsey – Dr. Derek Shepherd in the American TV series “Grey’s Anatomy” – took to the track aboard a Porsche 911 at Interlagos round of the Porsche CUP GT3 Brazil before the country’s Formula 1® Grand Prix, won by Nico Rosberg.

But that’s just one small anecdote with which to begin to tell the story of the Porsche CUP GT3 Brazil.

It is an adventure that began in 2005. Ten years ago, it seemed impossible that Brazil would be able to enjoy International Grand Touring events on its circuits. But it is a dream that became reality and continues to be so even today as a spectacle, and is of interest to many enthusiasts. Pirelli has worked with Porsche step-by-step from the start on this race series and it has toiled hard to develop the highest performance tyres possible, creating special covers for the cars that take to the track and bite into the asphalt of the Porsche CUP GT3 Brazil for the last 10 years.

The first Porsche mono-marque international championship event was run in Brazil on 16 April 2005, a country in which a large number of international motor sport competitions hosted many top drivers to battle for victory. Among the most recent stars of Formula 1® are Rubens Barrichello and Felipe Massa, with top driver involvement dating back to the ‘70s, when Emerson Fittipaldi won two F1® World Championships – in 1972 and 1974 – at the wheel of a Lotus and later a McLaren. And then there was the legendary Ayrton Senna, the Brazilian driver par excellence. Memories of him are still vivid in the minds of the Brazilians as well as the rest of the world’s motor sport enthusiasts. Undoubtedly, Ayrton occupies a place of honour among the sport’s top champions of the green and gold flag and not that alone. 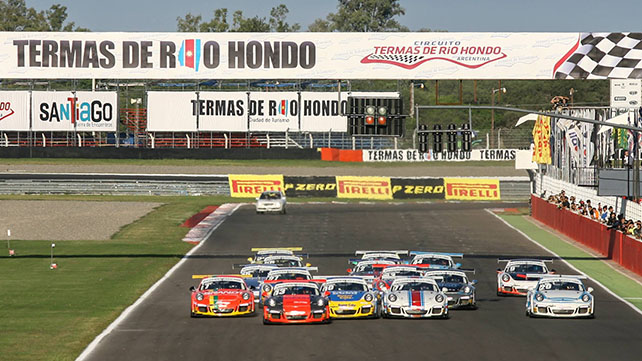 Returning to 2005, the Porsche CUP GT3 Brazil has been flagged away at Interlagos  - a circuit that has played host to the Formula 1® World Championship non-stop since 1990. In less than a year, the competition earned itself enormous visibility, and its reputation has grown so much that it equals the other top international events. The Porsche CUP GT3 Brazil has opened the Brazilian round in the Formula 1® World Championship on a number of occasions to enjoy a unique media interest that surrounds the world’s most prestigious international championship for single-seater cars.

The number of cars that have competed in the race increased to 24 from the 2007 event, already double the number on the starting grid of the first race of just two years previously. The dimensions have grown, and in the same year two new Brazilian circuits were added: Jacarepaguà and Santa Crux do Sul in the states of Rio de Janiero and Rio Grande do Sul.

There has been an increased internationalism to the competition and it is in continuous ascent, so much so that it also moved to Argentina and the Buenos Aires circuit. That first transfer out of Brazil and into the Argentinean capital enabled the competition to increase its notoriety even more in other countries. Those international dimensions have led to the championship to even pushing on into Europe: on the Old Continent, the series has been run in Portugal, first on the Estoril track and later the ultra-modern Algarve. A constant growth over the years that culminated on 2013 with the official recognition of the Porsche CUP GT3 Brazil by FIA. And from 2014, Pirelli has been the exclusive tyre supplier to the series.

A story of excellence on and off the track, which is continuing in 2016.

This year, the championship began on 12 March with the first pair of races at the Curitiba circuit. In the most multi-cultural city in Brazil – in which there is a large community made up of Italian descendants, Ukraines, Germans, Jews, Poles and even Japanese – the event was won by Daniel Schneider and then Miguel Paludo, respectively in race one and two.

This season, the spectacle of the Porsche CUP GT3 Brazil will only move out of its home country once, taking place on the Termas di Rio Hondo track in Argentina, after which it will stay in Brazil to run in Curitiba, Mogi Guaçu, twice at Goiânia and three at Interlagos, where it will open the Formula 1® weekend on 13 November, another fundamentally important series for Pirelli, in which it tests and develops its tyres to adorn the world’s most prestigious cars.

To stay in the world of racing, Interlagos will certainly be a chance to host a major celebrity. So who’s next after Patrick Dempsey?

Read more
Related Stories
Felipe Massa,
Brazilian boldness
with 14 seasons of service in F1®
race
Another victory for Pirelli tyres!
race
The most extreme competitions
race
MOST READ
Getting the show
on the road