The FIA GT Nations Cup proved to be a resounding success, when it came to Bahrain for the first running of the event 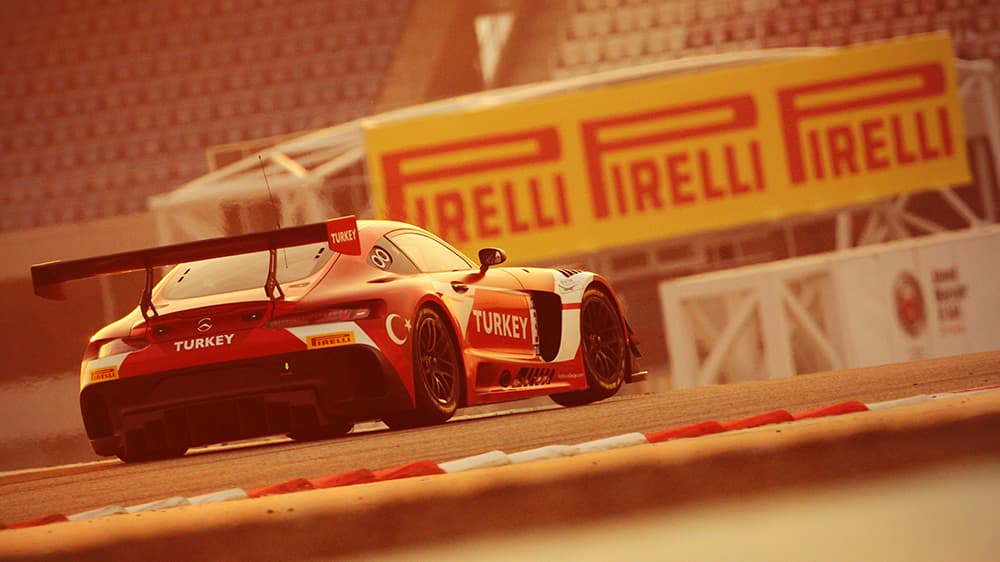 National pride
Turkey is known for a number of things when it comes to motorsport, including Pirelli’s ‘factory of champions’ in Izmit near Istanbul: the advanced motorsport factory that has been producing motorsport tyres since 2007. There is a dedicated motorsport facility that ensures the highest quality production standards, which is why it is where Pirelli’s Formula 1 tyres were first produced from 2011 when the Italian firm was first chosen to supply the sport as exclusive supplier. These days, it concentrates on GT tyres.
Which leads us neatly onto one of Turkey’s latest and most momentous achievements in motorsport: winning the FIA GT Nations Cup, held the first time in Bahrain at the beginning of this month. Think of it as the World Cup of motorsport, where GT talent from all over the world does battle.
The Mercedes crew of Ayhancan Guven and Salih Yoluc were in dominant form throughout the weekend, claiming a win in one of the qualification races as well as the main race.
In a thrilling finale under lights the Turkish crew hunted down the Team UK Ferrari to claim a resounding overall victory, in front of 17 other nations. Equipped of course with Pirelli DHD2 tyres, which were made in their homeland.

Meet the winners
Ayhancan Guven started off racing go-karts at home in Turkey, before making the move to Europe, with a spell racing karts in Italy, as well as the single-seater Formula Alfa series in Georgia. He then moved on to race in the Porsche Carrera Series in Germany, which was his springboard to GT racing.
He’s only 20 but has already established himself as an up-and-coming force in GT cars thanks to some promising results. However his FIA GT Nations cup victory in Bahrain is definitely his career highlight so far. It’s no surprise as the Turkish crew defeated some of the biggest names in sport: Italy, Germany, UK and all the other established nations.
Salih Yoluc is more experienced, having won the 2015 Dubai 24 Hours and becoming the first Turkish driver to compete in the Le Mans 24 Hours – where he finished 35th overall in 2017, at the wheel of an Aston Martin in the GTE class. Most recently, he’s been driving in the Asian Le Mans series.
“It’s been an amazing result,” said Yoluc, after the FIA GT Nations Cup. “We got so much love from back home and the support from the Turkish people has been fantastic. I don’t think that even a win at the 24 Hours of Le Mans would have created such a response, so a great weekend of racing at this very first national event. I’m very happy with how it went.”

New and established stars
On its first outing, the FIA GT Nations Cup proved to be a significant success – but next year, it takes on a very different look when it moves from the desert of Bahrain to the heartland of Italy. At the end of 2019, the FIA GT Nations Cup will take place in Vallelunga near Rome: with even more European nations likely to take part. The Nations Cup is an event that’s designed to travel around all the different continents, representing the global vision of competition that the name embodies.
Most of all, it’s an opportunity for emerging stars of GT racing to make their presence felt, as has been the case for Guven and Yoluc. With their success, more opportunities have presented themselves both for individual drivers and Turkish motorsport in general.
As well as several nations, it’s also been a platform for manufacturers to showcase the best of their GT3 and GT4 machinery. While Mercedes is a well-known name on the top step of the podium, the GT4 race was won by the nimble Alpine A110 – a new star on the international racing scene, which is significantly smaller than the other cars. Nonetheless, it uses its Pirelli tyres just as effectively, allowing the qualities of the chassis – which have earned it universal accolades as a road car – to shine through.
While Turkey was the star of the FIA GT Nations Cup, there was also plenty to celebrate in France.