Becoming a professional racing driver is a dream held by many, but only a very select few ever get to realise it 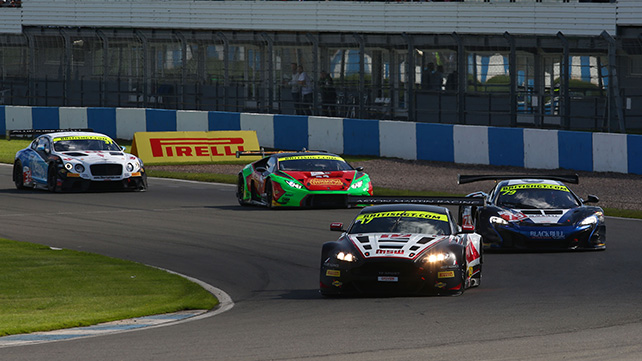 Whether it’s in Formula 1® or by representing a manufacturer in GT racing, where popular supercar models go head-to-head on the racetrack, for the vast majority fascinated by cars and racing at a young age, such dreams have to be put aside for more ordinary day jobs, but for some there’s a chance to get into it at a later stage.

One series has made a success of pairing these two types of driver – the professional and the amateur – together: the British GT Championship. And few pairings encapsulate this philosophy as well as this year’s GT3 class champions: Jonny Adam and Derek Johnston.

Adam was signed by Aston Martin as a factory driver off the back of his success in a series he’s raced in since 2011, and has had the chance to race around the globe for the brand. His most regular work comes on home ground though in the Vantage GT3, and this year he became the first driver to ever successfully defend the British GT title. What made that achievement even more impressive was that he did it in two different teams, alongside two different drivers. His 2016 title came on different tyres too, with Pirelli having become the exclusive supplier at the start of the season.

For the professional driver in a Pro-Am pairing, the objectives are two-fold. Firstly, there’s being fast on track, but there’s also the role of coach to their less-experienced team-mate to help them develop their driving. This is crucial, as it’s near-impossible for a car to win without both its drivers being quick.

Adam is highly thought of in both these areas, and Johnston says the Scotsman’s effort for the team goes even further: “Jonny’s a phenomenal driver. He’s so good in the car, he knows everything about the car, and he’s such a nice guy as well. He’s brought me on a lot this year: I’m two, two-and-a-half seconds a lap quicker everywhere this year, and that’s down to Jonny. Nothing’s ever a problem for him – he even polishes the car!”

A successful businessman, Johnston was in his mid-40s before he started racing but quickly gained success, winning Ferrari Open and GT Cup titles on Pirelli tyres before joining the British GT field. After taking a first win at the end of 2015, he was joined in his TF Sport-run Aston Martin by Adam, and they won the first two races of the season at Brands Hatch and Rockingham.

After that, there were some more difficult races for the pair, but they remained in title contention arriving at the Donington Park finale, where Johnston demonstrated his progress behind the wheel. Firstly, he topped a remarkably close Am qualifying session, where the top seven drivers were covered by less than three tenths of a second, then opened up a big lead in the first half of the race. With their rival crashing out behind in his attempts to keep up, Adam brought the car home in second place to secure the title.

“It’s been a tough season but we got our heads down and knew what we needed to do,” said Johnston. “But it was so stressful – that was the hardest race I’ve ever done. I just had in my head what Jonny had been telling me all week: ‘You’ve got to pull a 20-second gap’.”

GT3 racing is known for close competition between different cars, and that was definitely true in British GT this season with the top three crews in the standings driving machinery from three different manufacturers. The Lamborghini Huracan GT3 appeared in British GT for the first time, and Jon Minshaw and Phil Keen used one of the two Barwell Motorsport-entered cars to run Johnston and Adam closest for the title.

Minshaw and Keen kick-started their title bid with a win in the championship’s longest race, the three-hour, rain-affected Silverstone 500. Then, when they won both of the one-hour sprint races held at Snetterton, they were the first to claim two British GT3 wins on the same weekend for six years after overcoming a pit-stop success penalty along the way.

Another car that was frequently at the sharp end was the Team Parker Racing-run Bentley Continental GT3 of Rick Parfitt Jr – son of the Status Quo rockstar – and Seb Morris, who arrived from the Pirelli-backed GP3 Series and quickly impressed with pole positions, a race win and lap records (which were broken frequently during the year on Pirelli’s P Zero tyres, which proved their performance and durability).

Morris, 20, is one of the many young drivers turning to GT racing with hopes of forging a career, just like Adam has done. British GT has proven particularly attractive to younger drivers, thanks in part to the secondary GT4 class where grids were larger than ever this season.

Many GT4 cars featured two young drivers paired together, and one that particularly stood out was driven by Ciaran Haggerty, who turned 20 in August, and Sandy Mitchell, who is still only 16. Despite their inexperience, they were tasked by McLaren with developing its brand new 570S GT4.

Progress was clear to see, the pair taking two wins in the final two rounds, including being one half of a double win for McLaren and the Black Bull Ecurie Ecosse team at the Donington finale, with the sister 650S GT3 of Alasdair McCaig and factory driver Rob Bell taking the outright victory.

For Mitchell, who became the championship’s youngest ever winner, it’s been a phenomenal experience. “I’ve learnt so much this season that will do me good in the long run with all the GT things you have to learn, like the pit stops and the longer races, and with McLaren it’s been great to develop the car,” he says. “There have been a few difficulties but that’s to be expected when it’s the only car racing in the world right now. The season’s just got better and better as we’ve gone on and two wins from the last two tracks we’ve visited has been amazing.”

Jack Bartholomew, who like Haggerty switched to British GT from the Pirelli-supplied BRDC British F4 Championship for this year, came close to succeeding Beechdean Aston Martin team-mate Ross Gunn as a teenage champion in GT4.

In the end though, it was Graham Johnson and Mike Robinson that claimed the title in their PMW Expo Racing/Optimum Motorsport Ginetta. Officially, the duo are a Pro-Am pairing, but work for the same company during the week and have shown it’s possible to compete against younger, highly-rated opposition.

That was one of the many stories of British GT in 2016: close competition between fantastic cars, and success for drivers from very different backgrounds.

Read more
Related Stories
Legends and
hillclimbs
race
One week,
multiple championships
race
The Italian technology
behind Formula One
race
MOST READ
Jacques Villeneuve,
the rising and setting of the son