The sun sets on the 2016 season. For some people, anyway 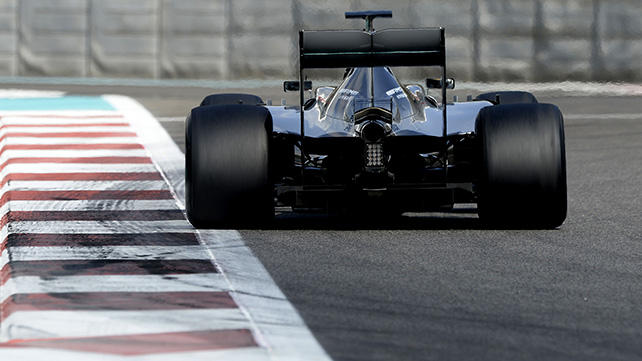 The sun sets on 2016
The Abu Dhabi Grand Prix may always have an end of term feel to it, but long after most people had gone and the hospitality units were packed away, Formula 1® cars were still pounding round the circuit as the light faded two days later.
Not just any cars though. These were the famous ‘mule cars’ with wide 2017 tyres – so-called after the Italian word ‘muletto’, which means a test prototype that has been cobbled together for a specific purpose. And the specific purpose in the case of the F1® mule cars, each based on a 2015 chassis, is to simulate next season’s levels of downforce – which they can only manage up to a point.
Still, it’s much better than nothing. And, because we all know that mules are hardworking, it’s no surprise that those three mule cars racked up a total of 2613 laps over five circuits this year, in the hands of 11 drivers.

F1® stars do overtime
It’s not just the cars that are hardworking. Red Bull’s Daniel Ricciardo wins the prize for having covered the highest number of racing kilometres this year: 6390, as opposed to newly-crowned world champion Nico Rosberg who is third in the standings on 6089 (behind Sergio Perez, on 6358).
But Ricciardo was one of five drivers back at work straight after the grand prix, completing the final test of Pirelli’s 2017 wider tyres. For the first time, the three sturdy mules appeared together on track, giving an exciting flavour of what the 2017 grid might look like, as they occasionally jostled for position.
The Red Bull driver shared the car with his team mate Max Verstappen as they both got their first taste of what the 2017 tyres are like. Mercedes driver Lewis Hamilton was also sampling the new tyres for the first time, while for Pascal Wehrlein – also driving the Mercedes at the Abu Dhabi test – it was a familiar experience, with the young German having completed more testing distance (3248 kilometres, in excess of half a season) than anybody else. Kimi Raikkonen also had prior experience of testing the new F1® tyres, so he was in sole charge of the Ferrari at the final Abu Dhabi test.

Finding the answers
But just because it was the last test, that doesn’t mean that the teams were trying out the definitive tyres for next year. In total, they got through around 96 prototypes at Abu Dhabi, with Pirelli splitting the workload between the three cars in order to collect as much data as possible. The drivers are already thinking about their Christmas breaks, but for Pirelli this is when the real hard work starts, with the task of sifting through 24 days worth of data in order to arrive at the definitive specification for next year – which will be seen on track in just over a couple of months. It’s not a complete standing start, as motorsport director Paul Hembery explains: “We’ve already started the process of narrowing things down, and it’s amazing just how much we’ve learned since we started testing the wider tyres at the beginning of August,” he points out. “But there is still a lot of analysis ahead. And we also have to factor into those calculations the fact that next year’s cars will be generating a lot more downforce than we have experienced with the mule cars, and that technical evolution during the course of the season is bound to be pretty swift.”

The countdown begins
So what happens next? Production of the tyres for the first official test in February will begin by late December or early January. To accommodate the 25% increase in the tyre width there has been some retooling within the factory, and this change also has a significant knock-on effect in terms of logistics, with container and storage size having to be increased, as well as additional shipping arranged.
The preparation has gone on for months, and next year’s official testing is still to come, which might not be particularly representative of the rest of the season due to cool European winter weather.
So there will be just one fundamental moment of truth when everyone finds out how effective all this effort has been: when the red lights go out in Melbourne on Sunday March 26 next year…

Read more
Related Stories
F1 goes wide
race
Colours in the desert
race
Who can be the last
of the late brakers?
race
MOST READ
Getting the show
on the road