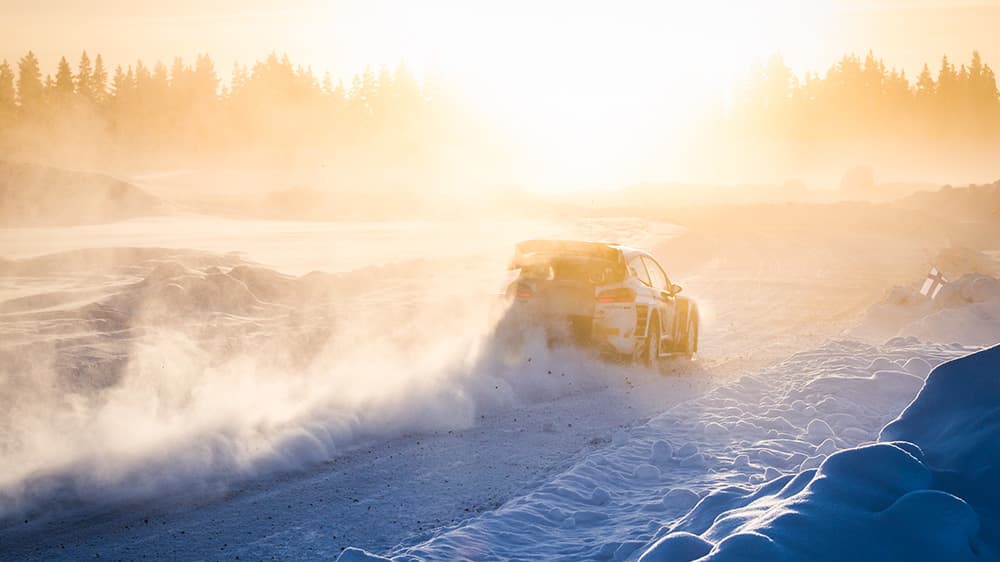 Mercedes Formula 1 driver Valtteri Bottas is the latest racer to have tried his hand at rallying, on the Arctic Rally in the frozen wastes of Northern Finland. Driving a Ford Fiesta WRC equipped with Pirelli tyres – and former world champion co-driver Timo Rautiainen calling the pace notes – Bottas finished fifth overall, even setting a fastest stage time. He said that he loved the whole experience.
But who else has been tempted to make the switch from racing to rallying (even for a little while?) Here are 10 of the best...

Kimi Raikkonen
The ‘Iceman’ completed two full seasons in the WRC (as well as a couple of one-offs when he was still in Formula 1) with a best result of fifth overall on the 2010 Rally of Turkey. He showed plenty of speed – even setting a fastest stage time in Germany – but sometimes struggled to adapt to pace notes. He finished 10th overall in the championship during both his WRC seasons, before going back to Formula 1. He’s committed to Sauber for the next couple of years, but don't rule out a switch back to rallying again in the future.

Stephane Sarrazin
The Frenchman’s Formula 1 career wasn’t quite so illustrious as he only competed in one grand prix: Brazil 1999, where he substituted for Luca Badoer. It ended in dramatic retirement after a wing failed and he spun six times in the middle of the track. But the Le Mans specialist has also had much happier times in rallying, finishing fourth overall with Subaru in Spain in 2004 (his best result) and ninth on the Rallye de France. On this year’s season-opener, Rallye Monte-Carlo, he finished on the podium of the WRC2 class, driving a Pirelli-equipped Hyundai i20.

Robert Kubica
The Pole is back in Formula 1 now with Williams, but previously he competed in rallying, following the horrible accident that put the first part of his F1 career on hold. In total, he started 70 rallies between 2004 and 2016, winning 11 of them. From 2013 he contested the World Rally Championship, winning WRC2 during that year and subsequently leading Rallye Monte-Carlo overall. So that’s what Valtteri needs to aim for…

Romain Dumas
Better known for his exploits at the Le Mans 24 Hours and Pikes Peak, Dumas had been a regular on French rallies in a Porsche when he made his world championship debut in a Mini John Cooper Works WRC on the 2012 Rallye de France. Since then, he’s been a regular on the WRC whenever he can, mostly in a Porsche. The German marque has been developing a Cayman GT4 for rallying, and Dumas has spearheaded its development.

Mika Salo
Having reached Formula 1’s holy grail by driving for Ferrari, Mika Salo took to rallying. He had a particular penchant for driving Group N cars on snow events. The Finn was a regular on the Arctic Lapland Rally and even tackled Norway’s candidate world championship event in 2006. Yes, there’s a long tradition of racing Finns rallying on snow…

Mika Hakkinen
Anything Mika Salo can do, his old adversary Hakkinen can do as well… McLaren’s two-time Formula 1 title-winner also made five appearances on the Arctic Lapland Rally between 2003 and 2009. His best result was 2004, when he finished seventh overall in a Toyota Corolla WRC.

Alex Caffi
With a career in Formula 1 and sportscars behind him, Alex Caffi took to rallying, putting his reputation on the line by making his WRC debut on the 2011 Monte Carlo Rally with a Skoda Fabia. Most recently, he was out in a classic Porsche at the Monza Rally Show last year, winning his class. And did we mention that he’s pretty handy at the Mille Miglia too?

Derek Warwick
Before Kimi Raikkonen, you had to go back to 1990 to find the last time that an active Formula 1 driver competed on a WRC event. Derek Warwick – at the time a Lotus F1 driver – took part on the RAC Rally at the wheel of a Subaru Legacy. He went off on stage 25.

Martin Brundle
The Englishman is now lead commentator for Sky Sports F1, but he’s also a keen rally driver. He’s competed on Britain’s round of the world championship twice, crashing out in a Ford Escort Cosworth in 1996 and then returning in 1999 with a factory Toyota Corolla WRC, co-driven by the legendary Arne Hertz. He retired with a broken radiator, but still loved the experience.

Jim Clark
The Scot is the only reigning Formula 1 world champion to have competed on a top-level international rally – but it was a strict one-off. Clark contested the 1966 RAC Rally in a Lotus Cortina, climbing to sixth overall by the halfway point before going off on the next stage. Still, having a current world champion on the event was a huge crowd-pleaser. Tempted, Lewis?

Read more
Related Stories
Rallying round the world
race
Sailing on four wheels
race
A Welsh
rallying wizard
race
MOST READ
Jacques Villeneuve,
the rising and setting of the son