Spa 24 Hours: a race pushed to the limits 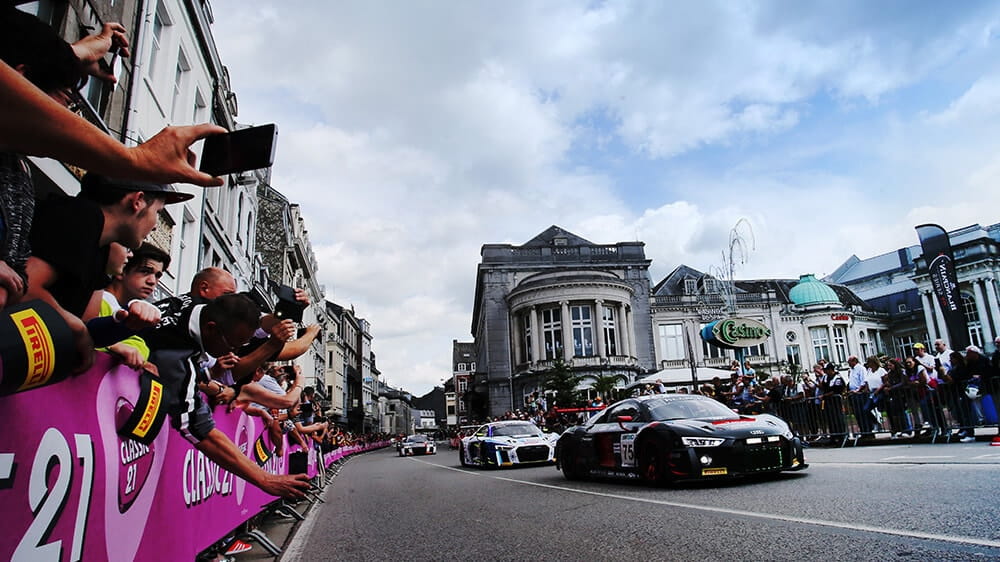 The dark rings around people’s eyes tell the story of the Spa 24 Hours race more eloquently than any report or chronicle ever could. Because let’s make one thing clear; contrary to popular belief, this epic endurance race for cars – one of the world’s biggest in terms of entrants and profile – isn’t actually a 24-hour event at all.

Yes, the start is at 4.30pm on Saturday and the finish happens to be at the same time on Sunday. But the build-up to the race held annually in Belgium takes place over the whole of the preceding week – and to reduce it to just 24 energy-sapping hours would be a big mistake.

Masochistic as it sounds, the backdrop of fatigue is a visceral, almost enjoyable, part of the whole experience. There’s an unseen connection between the participants and the audience; a bit like the sense of communion you find at a headlining rock concert. No wonder that the Californian rock band Linkin Park even sponsors a team at Spa.

Bruising battles
The Spa 24 Hours is a race that leaves its mark on people as well as on the cars. Quite literally in the case of Chris Harris, presenter of the BBC TV show Top Gear, and one of the many famous people to have competed there. Walking through the paddock before the start last year, he had his head sliced open by a man carelessly carrying a Formula 3 wing over his shoulder; an injury that required several stitches. He took part in the race anyway – and finished.

Freak accidents aside, the biological and mechanical contrast between before and after the race is shocking. The immaculately polished and fettled cars that are lovingly pushed to the grid on Saturday afternoon emerge at the other end (assuming they make it) filthy and battle-scarred, with bits hanging off and evidence of hastily-effected repairs using hammers and industrial-strength tape.

For people as well, the effect is the same; those fresh-faced individuals who were laughing and joking just 24 hours earlier are silent and often grey with fatigue, bags under the eyes providing an eerie portrait of how they will look in 25 years’ time.

Memorable moments
The drivers in theory get the chance to grab a bit of sleep in motorhomes close to the paddock during the race, because there are three or four drivers per car, each taking turns to drive for a couple of hours or more at a time. In reality sleep rarely comes. This is partly due to the constant noise that surrounds the paddock (many drivers choose to sleep with headphones tuned into the team radio to follow what’s happening to their car during the lonely hours of the night), but mostly because of the huge adrenalin surge caused by driving flat-out on this 7km track; renowned as one of the best circuits in the world.

After a podium finish last year, an emotional Bentley driver Maxime Soulet said: “It's the toughest race I’ve ever done, but everyone was crying tears of joy at the end; it’s just fantastic.”

That sense of achievement is thanks to legendary corners such as Eau Rouge; a twisting compression shortly after the start-finish line where drivers feel their spine crushed into the ground as they slam into the dip before experiencing near-weightlessness as they fly over the crest, just milliseconds later. Around 546 times in 24 hours.

The bravest drivers take Eau Rouge with throttle buried: a gravity-defying triumph of willpower over common sense. It’s most impressive at night, when sparks fly off the cars’ bellies as they hit the ground, headlights carving out a narrow tunnel through the pitch-black Belgian countryside, often streaked with rain.

Getting through
Maybe because they operate at a level beyond rational understanding, racing drivers are a superstitious bunch. Eric van de Poele – the most successful driver at Spa with five wins – used to like to stay in the same local hotel before the race where all the rooms are named after drivers. Every time he slept in the room named after him, he won the race. The one year he didn’t, he lost. Then in 2017 Markus Winkelhock slept in the “Eric van de Poele” room before the race and sure enough went on to be one of the winning drivers for Audi that year.

For the army of mechanics, the Spa 24 Hours is even tougher than it is for the drivers. They don’t have the same adrenalin surge to keep them going – just a tense wait between the 26 pit stops or so per car – but they are expected to perform at the same level. One mistake could send their drivers into the barriers at more than 250kph.

The beauty of endurance racing is that it’s where brain meets bravery. There’s an important strategic element in maximising every opportunity during the 24 hours (when the cars cover around 4,000km each), such as the timing of pit stops and any maintenance work needed. With more than 60 cars, each capable of lapping within around a second of each other, the smallest advantage can make a difference.

Every second counts
At one point in the middle of the night in last year’s race, the winning Audi was a lap down. It was only the tireless work of the mechanics, together with the speed of the drivers and a refusal to give up, that lifted it back into contention by Sunday morning after 359 laps, with several hours still to go. The car itself proved to be astonishingly reliable and that played a major part in its victory, the only unplanned pit stop being to secure a loose wheel.

Much of the maintenance is, of course, unscheduled and that’s when the mechanics really earn their money; taking less than an hour to change an entire gearbox, for example.

The Spa 24 Hours is very much a contact sport; you could call it ‘Spa Wars’. When the moves are a little too robust, the result can be a lengthy period behind the safety car; another element to add into the strategic mix. It’s a brutal, gladiatorial contest, with the lead changing hands 58 times in 2017.

A fine tradition
The Spa 24 Hours is nearly as old as the Le Mans endurance race, having started just a year later in 1924, when the Belgians decided that anything the French could do, they could do better. The original circuit was even more terrifying than the current version; a 15km, vaguely triangular track that used the ordinary roads between the towns of Stavelot, Malmedy and Spa, before being progressively modified into its current form since 1979. In its previous incarnation, Spa was the fastest circuit in Europe, with legendary champion Jackie Stewart calling the old Masta Kink (now part of a public road) “by far the most difficult corner in the world”. His opinion was no doubt shaped by a huge accident he had there in 1966, when he woke up upside down, covered in fuel, in a ditch next to a farmhouse.

This is the heritage of the Spa 24 Hours. And it’s a race that is still ruled by tradition today, such as the unique parade on the Wednesday night before the race when all the competing cars take to the public roads through the centre of Spa itself – also home to Europe’s oldest casino, dating back to 1763. Some 20,000 people regularly pack out the town centre to see this incredible sight, enjoying Belgian specialities such as frites-mayonnaise and, of course, Jupiler beer – the country’s best-seller which is synonymous with the 24-hour race – to fuel the festival atmosphere. The cars are close enough to touch, with the drivers signing autographs as they move past.

“The parade is pretty special,” says BMW driver Alexander Sims, a winner in 2016. “It’s when you come here, and see all these people, that the scale of what you’re about to do really sinks in.”

All the top sports-car manufacturers are normally represented at the Spa 24 Hours – from Aston Martin to Porsche – but BMW is currently the most successful with 22 wins.

That’s the fundamental appeal of the Spa 24 Hours; the cars on the track are not so dissimilar to those on the road. Real cars… with surreal racing. All night long.