Singapore F1 Circuit
and its technology 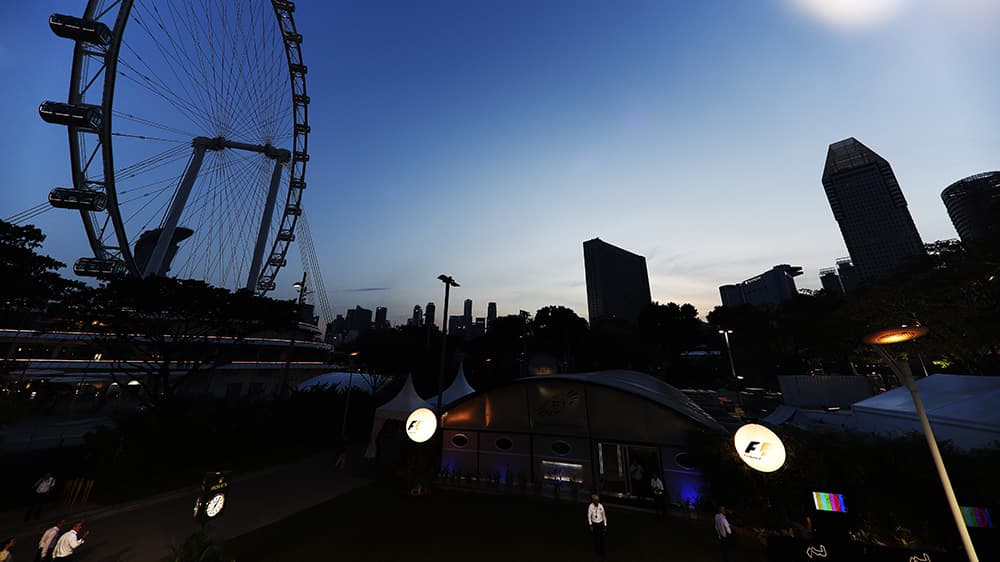 Singapore: the “island at the end”, as it was known in the third century. A country with a rich past, a flourishing present and a promising future.

After gaining its independence in 1965 and thus becoming the Republic of Singapore, throughout the following decades this small country has come to be one of the highest developed markets in the modern world. Nowadays, the country is deemed to be the most “technology-ready” and the one with most “investing potential”.

In the staggering and breath-taking skyline of the city, shining bright in the night-time thanks to thousands of artificial lights, one of the prominent areas and arguably the most famous is Marina Bay.

Here, some of the most famous buildings and entertainment centres of the area are located, such as Marina Bay Sands, a resort and one of the most expensive stand-alone casinos in the world, the ArtScience Museum, the Helix bridge and, of course, the Marina Bay Street Circuit.

THE CIRCUIT
The Marina Bay Street Circuit, also known as the “Singapore Street Circuit” is a street circuit around Singapore’s Marina Bay, which has been hosting the Singapore Grand Prix every year since 2008. The track’s harbourside design does echo the style of the older Circuit de Monaco and Valencia Street Circuit, as similarly to the two European circuits, the race cars would pass through the most evocative landmarks of the area, in this case the Singapore Flyer, the Supreme Court and the Parliament.

The circuit’s plan was initially proposed by the German engineer, racing driver and circuit designer Hermann Tilke, one of the four designers recognised by the Fédération Internationale de l'Automobile (FIA). He has designed several other F1 circuits both in Asia and in Easter Europe, such as the Sepang International Circuit, the Shanghai International Circuit and many more.

The plans then passed into the hands of KBR, Inc., an American engineering, procurement and construction company, whose corporate offices are located in Downtown Houston, in Texas.

Ten Grand Prix races have been held in the Marina Bay Circuit up to now. It is an asphalt-covered street circuit on which cars are driving anti-clockwise.

The circuit’s track is 5.065 kilometres (3.147 miles) long and its grandstands have a capacity of 90,000 people. The initial building costs amount to 33 million.

- The track
Due to Singapore’s yearly high temperatures, its humidity and the uneven nature of the street track, the Singapore Circuit represents a physical challenge for the drivers and it is probably the most demanding race on the F1 calendar. Moreover, it is the longest race of Formula One Grand Prix season, taking up to two hours to complete.

The paddock and pit areas are located on a wide zone next to the Republic Boulevard and beside the Singapore Flyer. The circuit has 23 corners and two short straights: the pit straight and then the curved straight between turns five and seven, shooting down Raffles Boulevard, famous for its luxury hotels and boutiques. It then proceeds on to Nicoll Highway, Stamford Road and St. Andrew’s Road around Padang, past the Singapore City Hall. Turns 15 to 17 are located in Raffle Avenue, possibly the city’s busiest thoroughfare. The track presents a truly unique stretch between turn 18 and 19, passing under the grandstands placed at the height of the Floating Platform.

- The track’s updates
Already in 2009 minor revisions were made to the circuit. However, the major change occurred in 2013 when the famous turn 10, known as the Singapore Sling chicane, was replaced and updated with a more conventional left-hander. For the 2015 Grand Prix the approach to turn 13 was also altered in an attempt to improve overtaking opportunities. These alterations have however not modified the spectator’s level of entertainment and rapture while watching the race.

The Marina Bay Street Circuit is the second slowest 23-turn circuit on the F1 calendar after the Circuit the Monaco; cars would drive at an average speed of 172kph. Due to its twisting layout, the circuit is quite hard on the brakes. Drivers need to complete 61 laps to finish the race.

One of the reasons why the race is held at night-time (usually at 8pm) is to reduce the hindering impact of the extremely hot and humid climate of Singapore. To allow drivers to be able to see during the night, while trying at the same time to minimise glare and other reflections caused by wet surfaces, the event is lit by more than a hundred thousand metres of power cables, 240 steel pylons, and around 1700 floodlight projectors using a total power requirement of more than 3 million watts.

SPORTS TRIVIA AND RECORDS
Here are a few interesting facts definitely worth mentioning when talking about the Marina Bay Street Circuit, in particular about its history and records.

The Singapore GP was the inaugural night race held in Marina Bay Street Circuit which was the first street circuit in Asia for F1 races. The first competition, which took place in 2008, was won by Spanish driver Fernando Alonso.

PIONEERING TECHNOLOGY
As you may suspect, the Grand Prix is the perfect occasion to showcase the latest triumphs of engineering, science and technology as a whole team of engineers employ their expertise to ensure the best automotive on-track performance.

For 2017’s race, it was reported that the Grand Prix final saw tremendous quantities of real-time data transmitted to factories located all around the world. As the CEO of McLaren Applied Technologies, Ian Rhodes, mentioned, there were terabytes of data float through the system, thus making it “the biggest science project on the planet for that period of time”.

The pioneering F1 tech, which has led to the building of thousands of vehicles, has to ensure that mission control can constantly check and be informed of what is going on in the cars; pneumatic assessments make sure they know exactly when drivers should change tyres, when engine power should be either increased or reduced.

In the city-state of Singapore, where sensors are located on buses, trains, atop buildings, thus contributing to the island’s objective to become more and more digital, a real “Smart Nation”, it should come as no surprise that early in 2018 it was announced that the island’s trains will soon undergo a rigorous F1-standard monitoring experiment. In fact, in 2018 it was announced that SMRT teams would start a collaboration with the British Formula One team of McLaren, whose engineers are aiming to adapt the technology used to monitor the automotive conditions to assess performance and reliability of Singapore’s high-speed MRT trains.

The key concept is to conduct an analysis of the train’s capability similar to the one conducted for the racing vehicle. In particular, the main aim is to adjust this technology to monitor train motors, brakes, pneumatic systems and gearboxes. During the GP season, McLaren race team captures more than 12 billion real-time data points for over 300 sensors embedded in its two cars.

Up until the end of July, Singapore business executive Desmond Kuek has been the President and Group Chief Executive Officer of the SMRT Corporation limited, namely, the second largest transport operator company in Singapore.

Kuek’s aim is to enhance commuters and passengers’ comfort, optimising train’s performance by detecting in advance and promptly remedying to any technical defect. He further commented saying: “We look forward to collaborating with McLaren Applied Technologies to elevate this capability further, combining our engineering expertise in rail systems with their proven capabilities harnessing sensors, telemetry and software in motorsport”.

This expert data analysis will allow to monitor information real-time, focussing on intelligent vehicle maintenance and aiming at providing a solution that hopefully would be applied on a global scale.

McLaren’s motorsport technology is to be adapted and installed on board of the first Proof of Concept (PoC) SMRT train in late 2018.

To paraphrase the words of the Director of Public Transport, McLaren Applied Technologies Paul Bebbington, the collaboration with McLaren is a sign of the brand’s commitment to the global transport industry and its customer to digitally enable future transport systems and accelerate the path to intelligent mobility.