British Formula 3, now supplied by Pirelli, has been well known for producing an army of Brazilian champions. Is this the latest one? 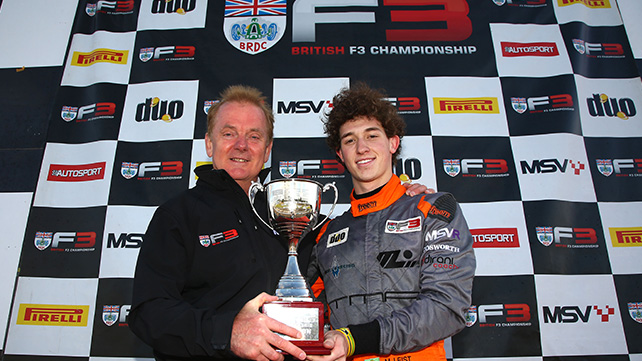 The tough road to the top
When it comes to sport, Brazilians are best known for their love of football, but they are hugely passionate about motorsport too. Central to this of course has been the success enjoyed by its three (multiple) Formula 1® world champions: Emerson Fittipaldi, Nelson Piquet and Ayrton Senna.
Despite their success though, it has never been a straightforward route for talented Brazilian drivers to reach the Promised Land. Usually, aspiring F1® racers have to leave home at an early age and travel to Europe. Britain is a popular destination, and all three of Brazil’s most famous motorsport heroes earned their break off the back of success in one particular category: British Formula 3.
In existence in one form or another from 1951, British F3 produced dozens of future F1® drivers, but it was Brazilian stars like Senna that gave it a special reputation. With competition from other championships in Europe however, its fortunes gradually declined and it closed down two years ago.

Back with a vengeance
This season, the famous British F3 name was revived – by Jonathan Palmer, the 1981 champion, an F1® driver of some repute and father of current racer Jolyon. His company MSV had already been successfully running the BRDC Formula 4 Championship, and for 2016 devised a new second-generation car. This was based on the FIA F4 car used in Germany and Italy and fitted with the same Pirelli tyres, but with greater aerodynamics and a more powerful engine.
The concept – to provide a stepping-stone from FIA F4 to championships like the Pirelli-equipped GP3 Series – proved popular and attracted the best of the old British F3 teams. It also led to a new name: the BRDC British Formula 3 Championship.
As with BRDC F4, the grid featured a highly cosmopolitan line-up. Top British talent was joined by young drivers from Australia, India, South Africa, the United States and, naturally, Brazil. Come the end of the year, it was a Brazilian driver celebrating the title: Matheus Leist.

Meeting Matheus
Leist was born in Novo Hamburgo – literally ‘New Hamburg’, a city established by early German immigrants. Following a spell in karting, his first car racing came in the Brazilian F3 championship – supplied by Pirelli – where he finished second in the ‘Light’ category. For 2015, guided by coach Danilo Dirani (himself a British F3 race-winner) he followed the path trodden by many before him by travelling to race in Britain.
After winning races in the MSA Formula series, he stepped up to BRDC British F3 with Double R Racing – a team originally co-founded by Kimi Raikkonen, whose former drivers include Bruno Senna, Ayrton’s nephew. With wins at Snetterton, Brands Hatch and Silverstone, Leist remained a title contender until the final round at Donington, where another victory enabled him to overhaul the leader and clinch the title, three days after his 19th birthday.
Leist is the 13th Brazilian to have won a British F3 title. Of the 12 that went before him, 10 went on to race in F1®, including Rubens Barrichello, Nelson Piquet Jr and, most recently, Felipe Nasr.
“I’m so happy to add my name to a list with a lot of big Brazilian names,” Leist says. “I know that a lot of Brazilians have won the British F3 championship and then after that went to F1®. I’m not saying I’m going to be in F1® next year – of course not – but I hope to be there one day, and maybe become a big name myself. I’m looking forward to my career now because I think this title is going to help me so much.”
Leist hopes to race in GP3 next season, in front of the people who matter in F1®. Whilst he’s working on raising a budget over the coming months, he too can rightfully claim – as Brazil’s latest British champion – to be his nation’s next big thing.