“And on V8th day, God made Brock!” This slogan, which still regularly appears at Australian V8 races 10 years after ‘Peter Perfect’ Brock passed on, sums up Australia’s love of motorsport 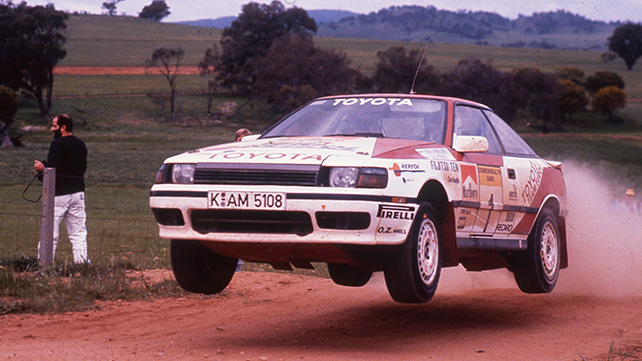 With more empty roads than probably any other country, it’s easy to see why the Aussies love driving. Where else would you be likely to see a road sign that reads: “Darwin: 3423 kilometres”?

ROAD AND CHALLENGES
The motorsport religion in Australia is V8 stock car racing, the continent’s answer to NASCAR and a discipline in which Brock excelled. He was a nine-time winner of the legendary Bathurst 1000, instantly making him a folk hero. In many ways he was a typical Australian: straight-talking with no prevarication, in the style of 1980 Formula One World Champion Alan Jones.
Take, for instance, the occasion in which Jones was asked whether or not he would rather see his Williams team mate Carlos Reutemann or Brabham’s Nelson Piquet succeed him as World Champion in 1981.
“Don’t care mate,” he told his interviewer. “I can’t stand either of them…”
Brock, who was mostly closely associated with Holden throughout his 40-year career, never made it as far as Formula One, but in the eyes of most Australians he did something even better than that, by becoming ‘King of the Mountain’ at Bathurst’s Mount Panorama circuit. So great were his achievements there that the Australian public was even prepared to overlook Brock’s noted eccentricities: away from racing he marketed the ‘energy polariser’, a device that he believed would improve any car’s handling by “aligning the molecules”.
Bathurst is one of the world’s great tracks, in the mould of the Nurburgring or Spa, with dramatic undulations, very little run-off, and variable weather to keep drivers on their toes. Having formerly been the preserve of the fabled V8 championship, the Mount Panorama circuit has also been open to GT cars since 2011, in the form of the Bathurst 12 Hours.
Unsurprisingly, this has proved massively popular, with the top European drivers flocking to the event, often paired with V8 specialists aiming to use their local knowledge in GT3 machinery.
Like any circuit that requires the ultimate in performance, Bathurst has always been an extremely happy hunting ground for Pirelli. The Italian firm came into this year’s Bathurst 12 Hours, which was also the opening round of the Intercontinental GT Challenge, already holding the lap record. What happened during the race went beyond expectations: a grand slam with pole, lap record, and race victory, thanks to the P Zero-equipped McLaren of Shane Van Gisbergen, Alvaro Parente, and Jonathan Webb. This was McLaren’s first major overall win in blue riband endurance racing since the marque triumphed at Le Mans in 1995.
It’s not just on the track that Pirelli has tasted Australian success: there have also been five victories on the World Rally Championship events held sporadically there (as Rally Australia was often alternated with New Zealand).
All of Pirelli’s WRC greats have won in Australia, starting from Juha Kankkunen, who triumphed for Toyota in 1989, through to the late Colin McRae and Richard Burns.

AUSTRLIA, A SORT OF PIRELLI MOTORSPORT HOMELAND
Norway’s Petter Solberg won Rally Australia in 2003 on Pirelli tyres, and he could easily have made it two wins: he was forced to retire from the lead on the penultimate day of the 2005 event when his Subaru Impreza hit a kangaroo.
“I just couldn’t believe it!” said a distraught Solberg back at service in Perth. “A f****ing kangaroo! What the f*** was it doing there anyway?” No doubt the kangaroo’s final thoughts ran along broadly similar lines, only with Solberg’s blue Subaru being the subject of its surprise, disbelief, and ultimately, disappointment.
At least stray kangaroos are not an occupational hazard that any of the F1® drivers will have to face at Albert Park. Most kangaroos in central Melbourne are instead served as rare steaks, with a salad garnish.