Luna Rossa grinder Shannon Falcone participates in the Rallylegend. Demonstrating just how close the worlds of sailing and motorsports really are. Starting with the need to dominate an uncontrollable environment 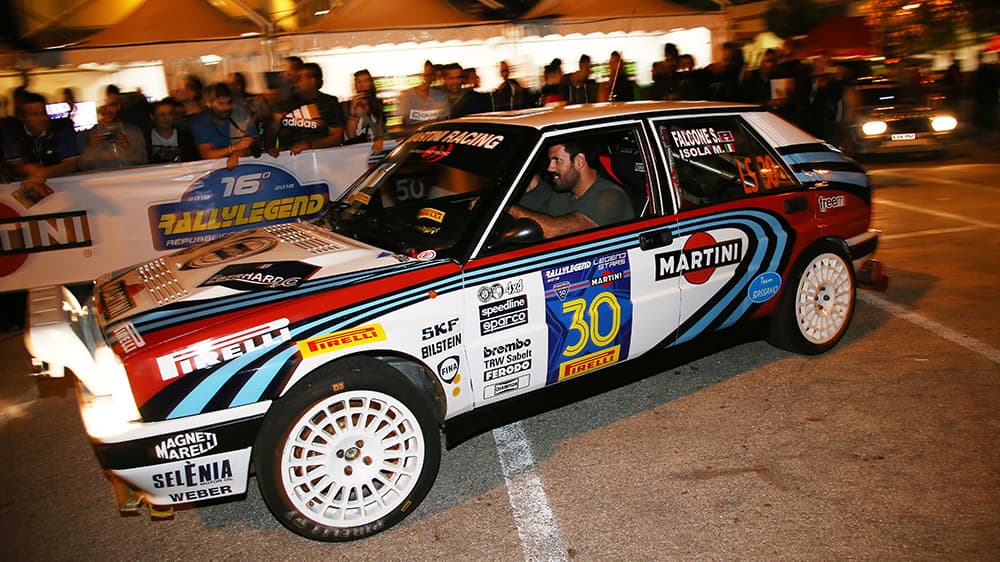 It was time for a break. And so Luna Rossa team member Shannon Falcone took a weekend off from his tough training for the 2021 America’s Cup. But instead of resting up, he attempted another sports challenge: the 2018 San Marino Rallylegend. It might seem odd that a man who grew up surrounded by the sea, in Antigua, and has crossed the ocean six times and sailed all the way around the world, should decide to attempt a challenge on four wheels, but this is not really a contradiction. “The rally has a lot in common with sailing,” says the sailor; “the sensations, concentration, the team dynamics are the same”.

A man of the sea on land, in the mud, demonstrating how close together these two only apparently distant worlds really are. Falcone’s father also combined a passion for sailing with a love of motorsports: “He competed in motocross events. I also started out on two wheels, only to go on to cars and Formula 1. I worked for Italian teams and was lucky enough to participate in several grand prix events”. Falcone’s first car was an integral Lancia Delta Evoluzione, the same one as he drove last weekend at the 2018 Rallylegend, in the Martini Racing livery with Pirelli tyres. This time Shannon Falcone shared the cab with two outstanding personalities with very different backgrounds: first a motorsports professional, Pirelli's Head of F1 and Car Racing Mario Isola, and then an experienced sailor, Magnus Augustson.

“I feel the same behind the wheel as I do at sea: when you're out on the water, the wind and conditions can quickly change. It’s the same in the rally: you have a route to follow, but you don’t have a controlled environment. That’s what I like about it.” Shannon hadn’t driven a rally car for three years, since San Marino. “The hardest thing was to ‘control myself’ at the wheel. In a car like that, it was like accelerating from 0 to 100 in an instant.”

The speed, the continual tension, the need to control the power: these factors are just as important in a rally as they are in sailing, both sports in which engineering R&D play an essential role. The level of a competition like the America’s Cup is getting closer and closer to that of Formula 1, though regattas also include a component of unpredictability that is absent on the racetrack: the sea is an “uncontrollable” place, more like the dirt roads of a rally, which can only be dominated through highly sophisticated scientific and technical research.

“We all realised that the approach required on board a boat has changed profoundly,” explains Falcone. “I mean, grinders like me have always had a tough life, even at a speed of 10 knots. You can just imagine what it’s like at 50!” The margin of error has inevitably grown smaller, and even the tiniest mistake can cost a lot. “It’s the same in a rally, where the tiniest error can change the results of the race. I realised this in San Marino.” At the Rally Legend Shannon's Lancia Delta lost its adherence in a curve with a bump and crashed. “I went too fast in a spot I wasn’t that familiar with. And this is what I learned from the thrilling experience of the Rallylegend: preparation and communication are two key factors.”

Sailing is no different. It’s essential to be able to trust your navigator, just as you have to be able to trust your team at sea. This is why the Luna Rossa team trains on land for months before we go to sea, to establish a family feeling. “We win and we make mistakes all together,” says Shannon with conviction. Referring not only to the driver/navigator duo in the car, or the team, but to the work of the people behind the scenes.  Because the technicians who design and test cars and boats today  are just as important as the people who operate them in the competitions.