Revealed: the best
rally driver of all time

Who’s the greatest driver in the history of the World Rally Championship? A global poll backed by WRC Promoter and Pirelli aims to finally find out

Finding the GOAT (Greatest Of All Time)

Who’s the greatest driver in the history of the World Rally Championship? It’s a tricky one to call, as the candidates are so many. If you’re going for sheer numbers, then you can’t look beyond Sebastien Loeb and his stunning array of nine world titles. However, championships aren’t everything. Markku Alen never won the title (or rather, he won it for just 11 days in 1986 before an FIA decision went against him) but the Finn claimed more stages than anybody else…until Loeb came along. Or maybe it’s Carlos Sainz, who is still winning at the Dakar Rally now, despite approaching his 60th birthday. Or Colin McRae: the youngest-ever World Rally Champion?

The debate could go on for years, so the promoters of the World Rally Championship have decided to settle it once and for all with a global challenge, supported by Pirelli. From the top 20 drivers in the world, fans will vote for the very best on the championship’s official website. 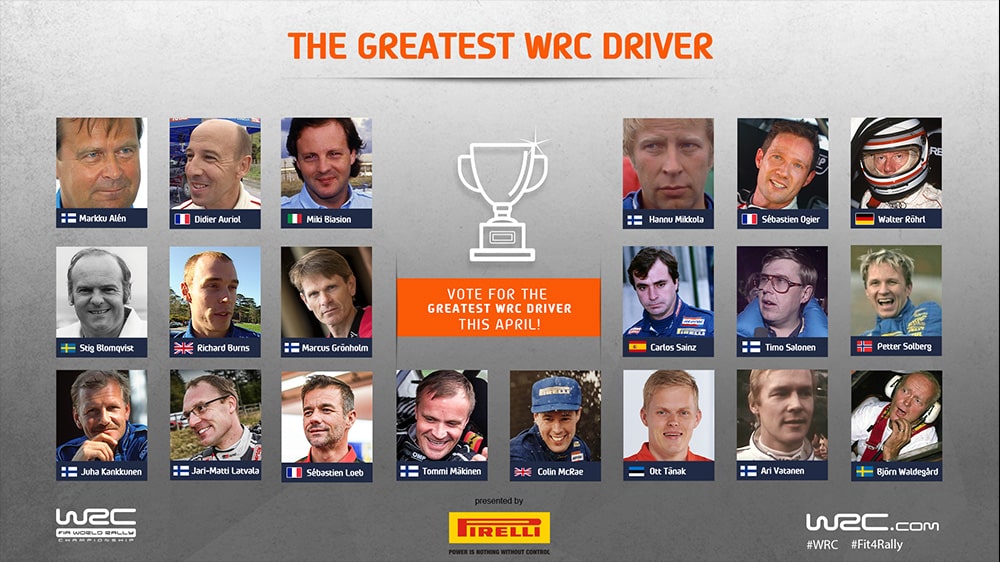 By the end of the vote, which will take the form of a head to head tournament with two drivers going up against each other at a time, the greatest of them all should be revealed. But the fans will have a bit of expert help, as some of the most experienced international journalists in the sport will be voting as well on each pairing.

Every day, fans have the chance to vote for their favourite from each pairing on the WRC’s official website. The fan vote will count for 40 per cent of the result in each driver face-off and will be combined with the decisions from the six expert journalists, whose vote will count for 10 per cent each, to produce a final result. Only then will the GOAT be revealed.

The action starts on Monday

The competition starts with the qualifying round on Monday April 6, which will pit eight drivers against each other. The winners will be announced the following day and take their places in the first round, which begins on Wednesday April 8. Those results will be announced at the completion of the eight daily duels.

As well as voting daily, fans will be invited to predict how the tournament results will shape up as a whole and submit their predictions via WRC Facebook Messenger. If their predictions match the final version after voting is completed, they will be entered into a draw to win a prize from Pirelli and a one-year subscription to WRC+ (which offers live online coverage of every stage of the World Rally Championship). The series – to be supplied exclusively by Pirelli from next year – may be on pause, but the champions are still competing…

Its snow joke in Sweden