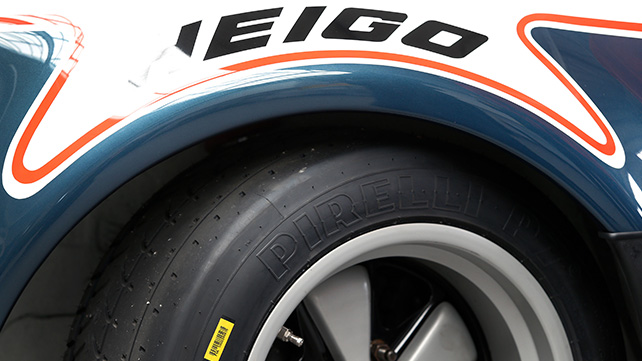 At the 24hr race on the Nurburgring, the fans of legendary racing cars once again got their money's worth. In a HEIGO Porsche 911 rally legend and audience favorite Walter Röhrl completed a fast tracktest on the challenging track, the so called Green Hell. To the delight of the many fans, the two-time rally world champion drove an edition model of the Rally Porsche with the highest dynamic in perfection on the legendary track. The bolide drove with Pirelli P7 Corsa Classic tyres.

The tracktest was organized by the Fédération Internationale des Véhicules Anciens (FIVA), the World Association of Oldtimer Clubs and Associations based in Brussels, and Pirelli. The Italian premium manufacturer is the official tyre partner of FIVA, which is dedicated to the preservation and promotion of the automobile cultural heritage. The aim of the association is to maintain and to drive historic vehicles. The FIVA ID Card is the only worldwide recognized certificate that documents the condition and authenticity of vehicles which are older than 30 years. FIVA currently has more than 85 member organizations in 65 countries and represents over 1.5 million classic car enthusiasts. The spectacular tracktest also served to inform the interested public about these diverse activities of the FIVA.

Walter Röhrl has a very special relationship with the HEIGO Porsche. Back in 1979 the current Porsche technician and test driver Dieter Röscheisen together with some friends built the original in order to take part in some rallys. Sponsored by HEIGO Autotechnik Dieter Röscheisen and his co-driver Klaus Hesse achieved some success with their car. At that time Röscheisen became friend and later technician of Walter Röhrl. At a party celebrating his first World Cup title in 1980, Walter Röhrl announced an English rally driver with Dieter Röscheisen. The Briton was looking for a Porsche for rally racing, and he bought the car of the German. 30 years later Dieter Röscheisen saw his Porsche in the Rothmanns-Design again by pure chance. That gave him an idea. Together with Rafael Diez, owner of the Restoration Workshop Diez Classic, and Helmut Heilmann, Managing Director of HEIGO Autotechnik, Dieter Röscheisen built a new HEIGO Porsche, which has been used by Walter Röhrl since 2012 in classic rallies and trade fairs.

Since that time the car has been wheeled with the P 7 Corsa Classic tyre, which was developed by Pirelli in 2011 for historical rally cars. It is based on the style of the original, which rolled over the slopes in the late 1970s. Pirelli's engineers have designed a dual tread for road and track to meet the requirements of today. Thus, the P 7 Corsa Classic can deliver top performance on all asphalt surfaces. Reliably the tyre transmits the enormous power of classic rally cars on the road and convince by its first-class handling. Pirelli developed three compounds: D3 for dry road surfaces, D5 for alternating and W5 for wet conditions.

Due to the growing demand, Pirelli continues to expand its product range Pirelli Collezione for the classical sector. In close partnership with automotive manufacturers, Pirelli develops tyres whose figure and tread design are the same as those of the original, but at the same time meet the high demands placed on modern tyres. In close co-operation with Porsche, in 2015, five tailor-made tyre treads were created for classic roadsters of the manufacturer. As a tester Walter Röhrl was also part of this development.

Currently, Pirelli cooperates with Jaguar to continuously expand the range of Pirelli Collezione.

The contribution of Pirelli to the competence pool of the FIVA is, among other things, to support owners and friends of old and youngtimers with practical help. Pirelli also assumed the role of technical consultant in all matters relating to tyres.