Racing to
the clouds

What's the second-oldest motorsport event in the USA, beaten only by the Indy 500? Read on to find out… 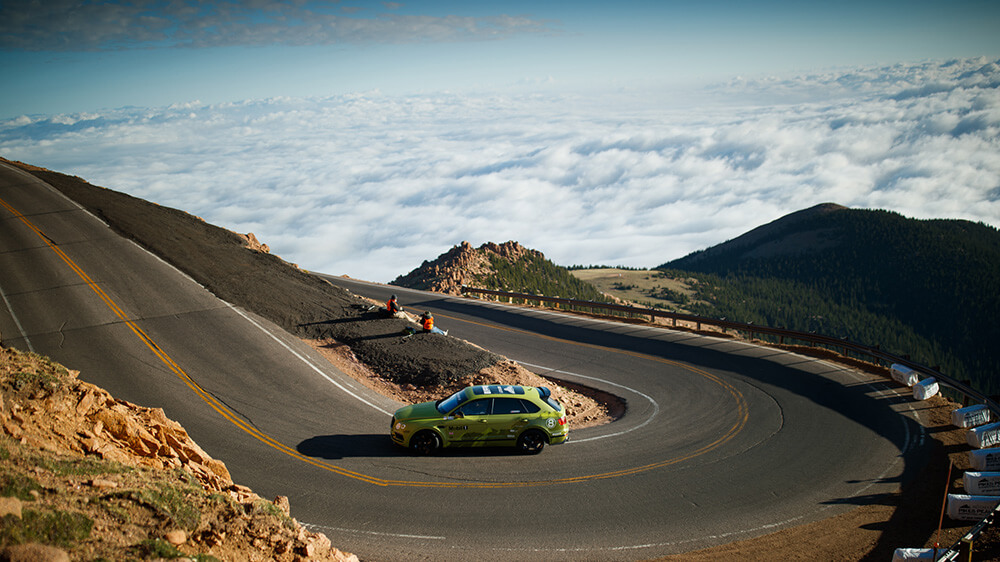 Champions come to Colorado
The Pikes Peak International Hillclimb, also billed as The Race to the Clouds, is one of those romantic annual events that always captures the attention of the world of motorsport for one weekend in June.

It hasn’t always been that way however. First held in 1916, the iconic Colorado-based event was pretty much the domain of American competitors for its first seven decades. That finally changed in 1984, when it attracted its first European drivers.

Both were big names when it came to driving fast on dirt: rallycross ace Martin Schanche and world rally star Michele Mouton. And both took on the climb with modified versions of their usual machinery. For ‘Mr Rallycross’ Schanche it was a Ford Escort Mk3 4x4, while Mouton was in the Audi Quattro with which she had already taken wins in the World Rally Championship.

On their first visit to Pikes Peak, it was Schanche (who travelled to America on his own without any support team, and even drove his Escort from the airport to the course and back) who went quicker on the practice runs, but his attempt at the win was foiled by having to do much of the hill on only three wheels after a front-right puncture.

With the support of the factory Audi crew, Mouton won her class in second overall, and returned in 1985 to take the outright victory with a new record time. She would be the first in a line of international stars to take on and conquer Pikes Peak.

Two years later Walter Rohrl gave Audi another win, and that was followed by perhaps the most famous Pikes Peak triumph of all, when Ari Vatanen’s win aboard his Peugeot 405 T16 was immortalised in the short film Climb Dance.

It's still one of the most mesmerising pieces of driving footage ever shot.

Far Eastern heroes
Through the 1990s and 2000s, the event would be dominated by two drivers who were neither American, nor European. Both rally drivers by trade, New Zealander Rod Millen and Japan’s Nobuhiro Tajima would gain reputations as Pikes Peak experts.

Known as ‘Monster’, Tajima headed up Suzuki’s motorsport programmes (including in WRC with Pirelli tyres) and conquered Pikes Peak twice in the 1990s before a run of six wins in a row, starting in 2006.

Over this period, more and more of the course was laid with asphalt after the local council was sued for environmental damage caused by the amount of gravel put down over the decades to maintain the road. For some, this reduced the character of Pikes Peak, but one side-effect of the change is that it has made times even quicker – and the course even more unforgiving.

The 2012 event was the first one run fully on asphalt, and a new record was duly set by Rhys Millen, the son of Rod. Then in 2013, nearly 30 years after Mouton, another WRC legend from France went to Pikes Peak and smashed that benchmark: Sebastien Loeb. In the purpose-built Peugeot 208 T16, he bettered Millen Jr’s time by a minute-and-a-half, with his 8m13.878s remaining as the record time today. Incredibly, Loeb’s time was actually quicker than Peugeot’s computer simulation claimed was technically possible.

Into the future
Since then, in addition to Rhys Millen taking the first overall win for an electric car in 2015, Loeb’s compatriot Romain Dumas has won three times in four years. Best known for his exploits in endurance racing – where this year he competes in the Pirelli-supplied Blancpain GT Series with Porsche – Dumas has also competed at the Monte Carlo Rally and the Dakar. A logical choice then for Volkswagen when it takes on the climb with an all-electric car this year. The Volkswagen is billed as the car to beat, with the advantage that electric power doesn't drop off with altitude en route to the 4300-metre summit, unlike atmospheric engines.

But there’s another contender too. This year, Italy’s Simone Faggioli will tackle the 20-kilometre course on June 24, equipped with Pirelli’s bespoke hillclimb tyres that have helped him accumulate a total of 10 European hillclimb titles. Driving an 800-horsepower Norma prototype, the 39-year-old has his eye on Loeb’s record. “Going to Pikes Peak is a dream that I’ve had for many years,” says Faggioli. “And now it’s finally coming true.”

Read more
Related Stories
From F1 to the electric smart: Pirelli in over 450 motorsport championships
race
The young
British racer
race
Girl power
road
MOST READ
Getting the show
on the road