Racing in silence: how the Smart e-Cup puts the focus on tyres

After a long wait, the Italian Alternative Energies Championship begins this weekend, involving 20 drivers who compete over six rounds. Their racing cars are based on the Smart EQ fortwo: little electric cars that race in silence, all equipped with Pirelli tyres 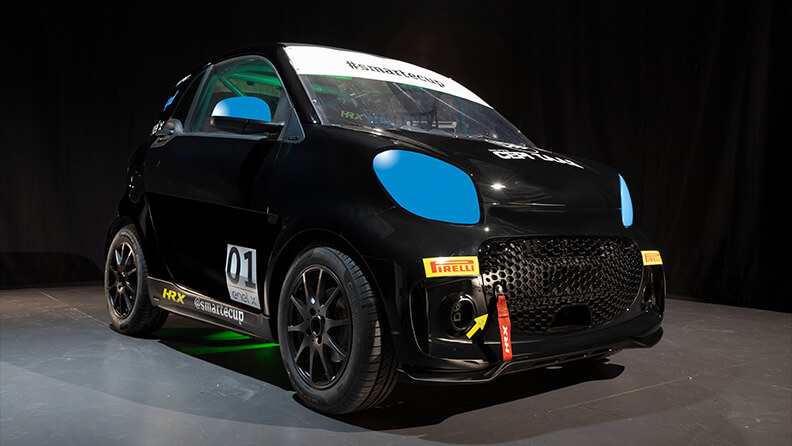 This weekend the 2020 Smart EQ fortwo e-cup begins, with the first round scheduled for Magione, featuring two races and new-look cars showcasing new technology. The races are frenetic but silent, with the only trackside noise coming from the tyres as the drivers try to find the limits of grip. The format takes in one free practice session, followed by qualifying on Saturday and two races on Sunday.

Pirelli exclusively equips the world’s first all-electric touring car series for the third consecutive year. The control tyre used is the Cinturato P1 Verde, seen on all the 100% electric racers, which are based on cars that are designed for cities but now also tackle some of the best-known circuits in Italy.

The Cinturato P1 Verde is the perfect tyre for cars with a focus on the environment, such as the Smart EQ fortwo – now ready to deliver maximum performance on the track as well.

The championship: where, when and what’s new?

The start of the 2020 campaign happens at Magione from July 25-26 on a clockwise track that was inaugurated on April 7, 1973, with a total length of 2507 metres. After the first race meeting in Umbria, the Smart EQ fortwo e-cup moves to Vallelunga from 12-13 September: a track close to Rome named after legendary Italian racing driver Piero Taruffi. Next up come two new venues for 2020: Pergusa and Varano.

The Pergusa round, in the depths of Sicily not far from Enna, will take place from 10-11 October. It’s a high speed blast around a lake, on a circuit that was inaugurated in 1951. Two weeks later, the next round takes place at Varano: a circuit close to Parma, named after Italian driver Riccardo Paletti, killed in 1982 at the start of the Canadian Grand Prix.

From 14-15 November the championship moves to Misano on the Adriatic Coast – a track dedicated the memory of bike racer Marco Simoncelli since 2011 –  before the grand finale. This is scheduled from December 5-6 at Adria International Raceway: a circuit in the Veneto region of Italy that was previously also used for the DTM championship.