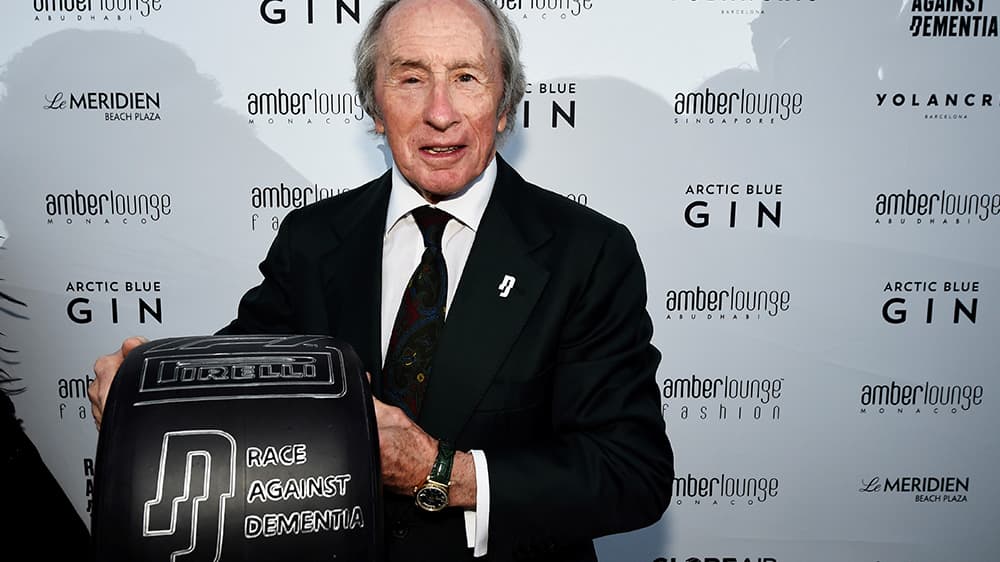 Taking it personally
Sir Jackie Stewart, while fearless in a car – as his three Monaco Grand Prix victories prove – devoted much of his professional life to fighting fear: making motorsport a slightly less terrifying and much more survivable activity for those who did it month after month, thanks to a relentless campaign to improve safety.

Having stopped his driving career more than 40 years ago, he’s still protecting people now. But this time, it’s from the deadly consequences of dementia: a disease that astonishingly affects 50 million people around the world. In fact, one out of every three people born today will develop dementia in their lifetime unless a cure is found.

Sir Jackie founded the Race Against Dementia charity after his wife Helen was diagnosed with the condition in 2014. For him, it’s a deeply personal cause, and this three-time world champion – and the winner of 27 grands prix – describes the couple’s fight against the disease as the “biggest challenge” of his life.

Putting the wheels in motion
But of course, Sir Jackie has always been fighting challenges. He had to overcome dyslexia and then face one of the most gladiatorial sporting arenas of all-time: Formula 1 in the 1960s and 70s. He’s invested even more energy into fundraising for Race Against Dementia, and one recent initiative took place in the Amber Lounge Charity Auction at the Monaco Grand Prix.

This year, Pirelli has been giving away the Pole Position Award – a replica wind tunnel tyre, engraved with the name of each race – after every qualifying session. It’s a strict one-off for each race, with only the poleman getting to keep it. However, there’s an exception for Monaco. At this grand prix only, there are two – with one being auctioned for Race Against Dementia at the charity fundraiser on Friday night.

Hope for the future
The Pirelli Pole Position Award was presented to Lewis Hamilton by Sir Jackie on Saturday: Lewis’s 85th pole position (Sir Jackie claimed 17 over the course of his career). Lewis took his pole tyre home, while the only other was entered for sale in the silent auction, with all proceeds going to Race Against Dementia. The money will be spent on global research into dementia and the hunt for a cure, using not only some of the world’s most eminent scientists at internationally-renowned research centres but also what Sir Jackie calls ‘F1 Attitude’. In other words, thinking outside of the box and finding new ways to achieve success, with innovation, skill and passion. Those values personify Sir Jackie himself. And for Pirelli, it’s a true privilege to be associated with this tartan hero and his pioneering charity.

Read more
Related Stories
Five one-two finishes
into history
race
Farewell to Niki Lauda,
Formula 1 champion and hero
race
F1, where the streets
are paved with gold
race
MOST READ
Jacques Villeneuve,
the rising and setting of the son