Racing, always at the heart of Pirelli’s corporate DNA, expands to every area of the sport on 2 wheels and 4, from the thrill of open wheel in Formula 1® to the challenges of open terrain in Rally, all in an effort to push the driving experience to its maximum expression of skill and technology. In the case of Pirelli World Challenge®, the story is even richer, connecting all aspects of motorsports competition directly to over 20 car manufacturers from across the globe represented in the series. The astounding line up of cars – 90 in total for 2016 – is remarkably diverse, spanning from the pinnacle of Prestige including Lamborghini Ferrari, and McLaren, to standard marques such as Kia and Honda; providing a unique proving ground for our P Zero racing product. 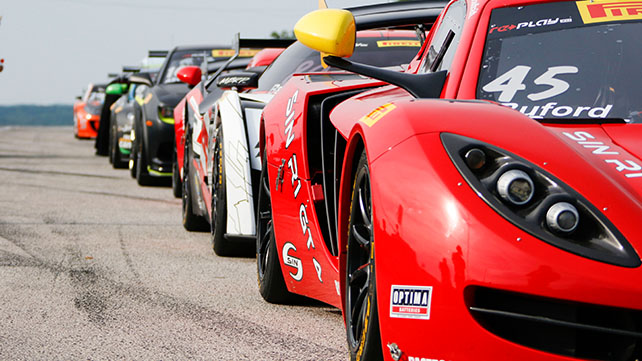 Pirelli World Challenge®, a production-based sprint-format series, was originally devised to provide racing teams, participating car makers and aftermarket suppliers with a platform on which to compete and showcase their products. Currently featuring six separate classes of competition (GT/GTA, GT Cup, GTS, Touring Car, Touring Car A and Touring Car B-Spec), the series allows for a wide range of racing possibilities, giving fans the unique opportunity to watch competition between super cars at the highest level along-side the marques that they may themselves drive or encounter on their daily commute.  Then an additional dimension was added to the competition with the introduction of the Sprint X GT Championship series, which maintains a 60 minute time limit while adding the elements of mandatory driver and tire changes. During the course of the season, Pirelli World Challenge® will take Pirelli to some of the most iconic tracks in the United States including Circuit of the Americas, Mazda Laguna Seca Raceway, Mosport, Road America, and the Long Beach Grand Prix street Circuit alongside the Indy car series. These tracks in addition to other storied venues across the country take the Pirelli World Challenge® to fans all over North America, creating an experience that is truly comprehensive for North American race fans.

No matter the series, Pirelli is of course ready to answer the call to provide a competitive racing experience, allowing drivers and cars to perform at their utmost capabilities. The Pirelli World Challenge® is at the very heart of Pirelli brand and what it's about as a company: the enjoyment of driving the world’s most prestigious cars, at some of the best-known circuits in motorsport. The tyre technology that Pirelli uses in the Pirelli World Challenge® is derived from that seen in Formula 1®, underlining Pirelli’s unique status as the world leader in Ultra High Performance products. As always, Pirelli’s emphasis on maximum performance and premium product is tied deeply to the base of knowledge achieved through working in motorsports and rising to the challenge of meeting the extreme demands that competition commands of its tires. This wealth of knowledge is derived from the very pinnacle of motorsports with Formula 1®, on through all of the different series and types of challenges within which Pirelli technology is used – with each level of competition adding something unique to Pirelli’s Motorsports story.

Pirelli World Challenge® provides a platform in the US market that cultivates growth, innovation and a spirit that is mutually beneficial for both brands.  Importantly, it also presents a key opportunity to emphasize Pirelli’s commitment to excellence and best-in-class competition in a way that honors the North American market’s particular flavor and nuance. Or, one could simply state the case as Pirelli World Challenge® does, which is to say that it is truly, “the way racing should be”.