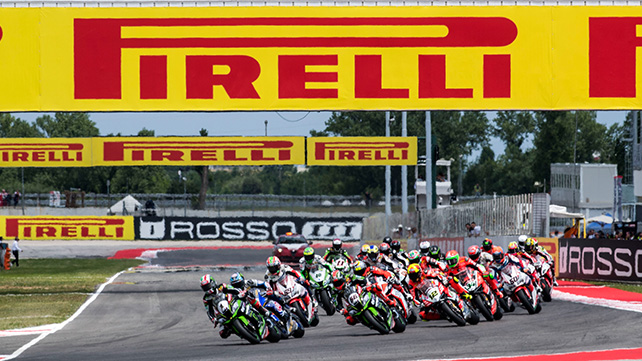 Pirelli will take part in 119 motorcycle championships in 2017, as the sole tyre supplier for some and in open competition with other tyre manufacturers for others.

Pirelli will be involved in global competitions such as Superbike, Motocross and Endurance, as well as various national and local competitions like British Superbike, both on the track and off road. So in 2017 Pirelli will once again be fully committed to racing with its brand remaining faithful to its sporting DNA!

There will be no lack of product innovation, starting with the tyres made specifically for use in track competition. Most significant of all is the new Superpole® tyre, which will be introduced at Aragón, the first European round of the MOTUL FIM Superbike World Championship season, where Pirelli has been the sole tyre supplier for all classes uninterrupted since 2004, an undisputed record!
As in 2016, the new Pirelli qualifying tyres will only be available during the Saturday Superpole®, exclusively for the 12 riders who manage to reach the second session of the Superpole®, the part that decides the starting grid position of the first 12 riders. That's nothing new, with the real surprise being that, while in the past the qualifying tyre was only capable of providing one timed lap, the new tyre developed by Pirelli will enable riders a minimum of two and a maximum of four timed laps, depending on the characteristics of the individual circuit.This means that this year will be even more spectacular and entertaining for both the riders and all Superbike fans!

But the good news for racing lovers don't stop here: Pirelli has also decided to support various solutions for new slick tyre ranges for 2017: DIABLO™ Superbike will therefore have new rear tyres and a new SC1 compound for the front tyre range, which will be available not only for the riders in the World Championships and all the Superbike national championships, but also in the shops for regular motorcyclists.That's right: we're not talking about special tyres which can only be used by professional riders, but tyres which any normal motorcycle rider can also buy for themselves! That's our motto, after all: “We sell what we race, we race what we sell”!

From 2017 the new entry point for the Superbike Championship will be the FIM Supersport 300 World Championship, the new class for small-cylinder bikes which is also now the entry level competition for enthusiasts who want to get closer to the world of super sports.

As well as being active in track racing, Pirelli will also be involved in the FIM Motocross World Championship, where the Italian tyre company is once again sure to play a leading role given the fact that it boasts 66 world title victories, gained with products sold on the market and strictly in line with the SCORPION™ MX product range. This year the range has undergone a light restyling and repositioning. For the front tyre, riders can choose between SCORPION™ MX32™ with Mid Soft or Mid Hard compounds, while for the rear tyre there are four compounds available: as well as SCORPION™ MX32™ with Mid Soft or Mid Hard compounds there are also SCORPION™ MX Soft and SCORPION™ MX Hard. So it's all good news all round for those of you who prefer riding about in the mud!

From track racing to off road, Pirelli's commitment is global! You'll see it with the English championship, the MCE British Superbike where Pirelli is presenting sponsor and sole tyre supplier for all classes from 2008 to 2020, or of the German National Championship, the French Superbike FSBK (French National Championship), the CIV (Italian Speed Championship),, the Brazil Superbike Series and the Malaysia and the Phillipines Superbike Series....a list of competitions so long it's impossible to mention them all!There's absolutely no question: the Pirelli people involved in the competitions will be everywhere, working alongside teams and riders throughout the world every weekend of the year in the search for precious podium places and race victories!

Read more
Related Stories
From a life on skis
to a passion for cars and motorbikes
road
Stealing the show
race
French Round -
a hidden world
among the châteaux of Burgundy
road
MOST READ
Pirelli: employees in Italy donate over 7,000 work hours to support Milan’s Sacco hospital