Pirelli and the
Australian GT Championship 2016

Highly competitive and more spectacular than ever before, this season 2016 Australian GT Championship has brought much anticipation from both fans and competitors within the motorsport world. Not only does it play host to over 12 of the world’s most prestigious marquees, it undoubtedly showcases some of the greatest circuits here in Australia 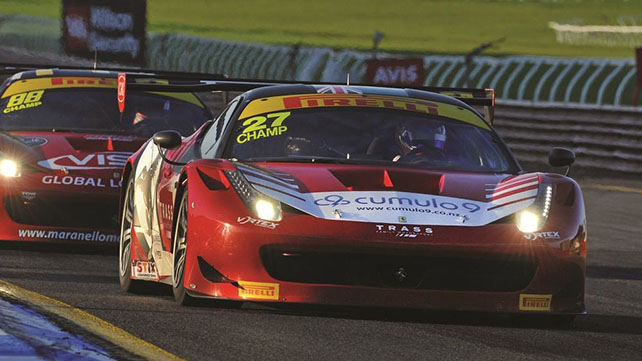 Known as one of the oldest and most respected motorsport competition in Australia, professional and amateur drivers alike are determined to grab a spot in the race to demonstrate their many talents and enjoy the thrill of the sport. Maybe one day hoping to make a name of themselves amongst Australian motorsport legends of the early 1960s LeoGeoghegan and Bob Jane.

This year’s 2016 season is set to be the biggest ever in Australian GT history, with CAMS Australian GT Championship joined by the all-new CAMS Australian Endurance Championship and Australian GT Trophy Series presented by Pirelli. In the end of the competition only three champions will be crowned. With the main Championship event commencing on 3rd March 2016 at Adelaide Street Circuit the competition will be made up of shorter races, between 30 and 60 minutes, with compulsory timed pit-stops. The rounds are held at Clipsal 500, the Australian Grand Prix, Barbagallo Raceway, Phillip Island, Townsville, and the final show down held at Highlands Motorsport Park on 13th November.

Also, bringing change for the first time the Australian GT Championship revealed the cars are being run solely on spec GT3 machinery.  The move to GT3 has boomed in recent years not only in Australia but worldwide, with the world’s leading automotive manufacturers Audi, Mercedes, Ferrari, Aston Martin, McLaren, Porsche, Lamborghini, BMW welcoming their latest innovative racing cars in the market.

Currently on the official leader standings after round 6 in Townsville, Nathan Morcom from Techno Auto sport McLaren is in lead with a strong 445 points closely followed by Darrell Lea McLaren’s driver Klark Quinn  in 2nd place on 394 and Audi team mates James Koundouris and Marcus Marshall both steady on 3rd position.

World leaders in the Australian GT Championship and worldwide
Whether competing with leading tyre manufacturers or supporting team drivers on the track, Pirelli’s presence can be seen in every racing venue around the world. In recent years the company’s expansion in the motorsport industry earned them the title as world leader, with their involvement in more than 300 Championships over 40 countries. Pirelli’s plan to expand in the Asia-pacific continues with their recent announcement of being the official tyre supplier for the China GT Championship and as well as Liqui-Moly Bathurst 12hr endurance race in 2017.

Marking their fifth successful partnership between the Australian GT Championship and Pirelli, the GT Championship will utilise durable DH slicks and WH wet compound tyre in various 18 inch or above sizes to best suit each car model.

In representing Pirelli, Motorsport director Paul Hembery oversees the development of 175 new tyre designs per year with 500 employees and researchers all working between the Research and Development centre in Italy and two factories (Turkey and Romania) around the world. Significantly Pirelli total production accounts to 570,000 tyres per year. But what happens to all these tyres? Interestingly, Pirelli values high levels of sustainability where at the end of every race all tyres are recycled.

With this year’s Australian GT Championship season coming to a close in November, Pirelli will continue to believe strongly in promoting the careers of future young drivers through sport racing events and highlighting their talents for all to see.

Read more
Related Stories
The ADAC GT Masters: welcome to the league of supersportscars
race
Rally Finland:
the fastest rally
of them all
race
The art of being
everywhere at once
race
MOST READ
Getting the show
on the road