Pirelli and its home circuit of Monza have always been inextricably linked: did you know that Pirelli even built a test track there? 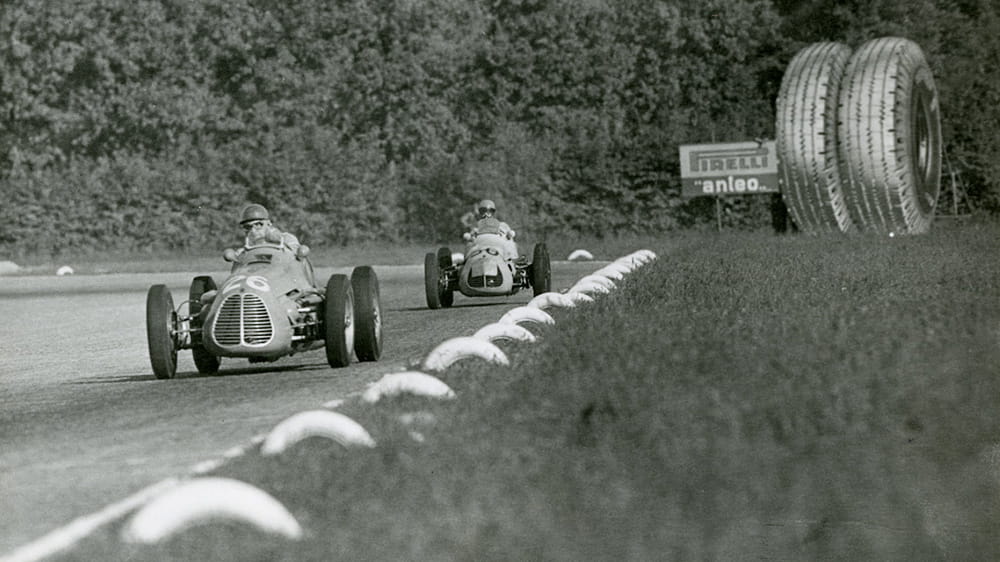 There’s always been a strong relationship between Pirelli and the Monza circuit, which is situated around 20 minutes away from the company’s headquarters in Milan. Less, if you’re going by motorbike or don’t find any traffic (which is harder to achieve, especially during the grand prix weekend). But it wasn’t always like that – as Pirelli was around for many years before the Monza circuit was even thought of.

Giovanni Battista Pirelli founded the company in 1872, right in the centre of Milan. Back then, motorsport didn't even really exist and the pneumatic tyre was only just being invented. But from there, the industry expanded rapidly: Pirelli moved to its present site, in the Bicocca district of Milan, in 1907 (the same year that it claimed its first major motorsport victory, in the Peking to Paris road race).

Just fifteen years later, the Monza track was inaugurated close by in 1922: only the third permanent racing circuit in the world, after Brooklands and Indianapolis. The very first race there took place in September 1922, and Pirelli-equipped Fiat 804s finished first and second, courtesy of Pietro Bordino and Felice Nazzaro. It was the start of a beautiful relationship.

Monza’s popularity over the following years is well documented, as interest in cars and races really took off. This boom was reflected at Pirelli’s Bicocca factory as well, which had expanded to take over the entire district; practically bordering on Monza.

By the end of the 1930s, the factory had reached its peak in size and by 1950 there were more than 12,000 employees. It was a real village, which even had its own railway line to transport products between the warehouses, which included competition tyres such as the famous Stella Bianca (meaning ‘white star’ in English).

This was a tyre that dominated the early days of the Italian Grand Prix, notably with Alberto Ascari and Ferrari, before being replaced by the Stelvio. Think of it as the P Zero of its time.
The Pirelli Stelvio, driven when it was new by Juan Manuel Fangio, still lives on: except this time as part of the Pirelli Collezione range of classic car tyres.
The latest Stelvio has been designed to equip the most expensive and exclusive classic car in the world: the Ferrari 250 GTO. One was sold last year in California for the record price of $48 million dollars…

Pirelli actually commissioned a short rectangular test track to be built using the Monza infield as well, following the reconstruction of the track after the 1938 Italian Grand Prix. It had just been completed when World War II broke out, so was never used in the end. But it’s another sign of just how close the links are between the two Italian icons.

Where tradition meets the modern world

Heritage is a value that both Pirelli and Monza share. Fans coming to the Italian Grand Prix are always fascinated by the ancient banking, and other reminders of motorsport’s illustrious past.

Another historic name that lives on is Pirelli’s Cinturato, first developed in 1952 as the ‘Cintura’ before taking on the ‘Cinturato’ name in the 1960s, used extensively back then for high performance road cars. These days, it describes Pirelli’s wet-weather tyres, which – curiously – have featured at the usually-dry Italian Grand Prix for the last two years.

That heritage is something you see everywhere in Italy around the grand prix weekend: Pirelli’s current headquarters building, still at the same Bicocca site, may be ultra-modern but there’s a distinct nod to its industrial past: the glass and chrome structure is built around one of the factory’s original cooling towers from 1922, creating a spectacular atrium that forms the centrepiece of Pirelli’s offices.

Rather than smoke and soot, the inside of that cooling tower now houses a lecture theatre – used to host conferences and also, a few years back, the Italian Grand Prix fan forum: which opened up the building to F1 fans. Times and places change but the association between Pirelli and Monza will always remain solid – from the Italian Grand Prix to the Monza Rally. For many years into the future.

Read more
Related Stories
The five Kings
of Monza F1
race
Hakk
is back
race
F1, Hungary: where it’s impossible to overtake. Most of the time…
race
MOST READ
Supercars -
dream cars