Formula 1 opened a thrilling new chapter with a truly innovative display in London before the British Grand Prix. And Pirelli was right there 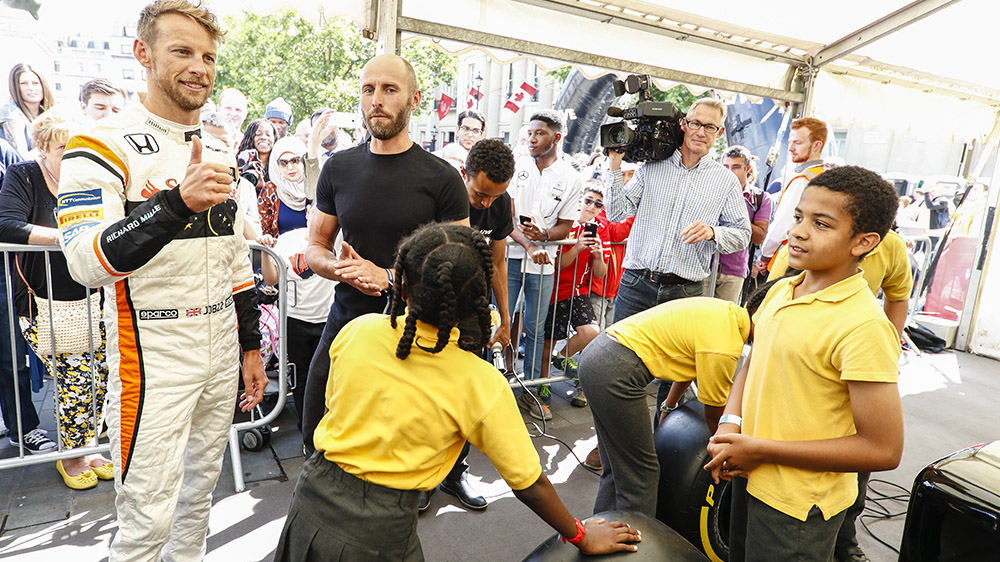 Battle of Trafalgar
The official numbers are still coming in about how many people watched the F1 Live show in London (both in person and over the internet) but the man with the best view of the 100,000 or so people present was undoubtedly Admiral Horatio Nelson.
The statue of the famous British admiral sits 50 metres above Trafalgar Square, on his pedestal that forms one of London’s most recognisable landmarks. Directly below him, on Wednesday 12 July, was a stage hosting headlining bands, a conference to highlight the F1 in Schools programme, and a pit stop challenge with a Pirelli-branded Formula 1 car, highlighting the essential role that the tyres and those pit stops play. This was one of the key attractions of the day, pulling in huge crowds.
Incredibly the whole show of bringing the entire grid of Formula 1 cars to an event outside of a race track for the first time was put together by Formula One Management in only around a month, despite the massive logistical work needed to make it happen. Think about it: for the first time, anywhere in the world, a European capital city was effectively shut down just so that people could see Formula 1 cars in action with a special event. Not only that but there were interviews, concerts, entertainment and autographs. There’s been a lot of talk in the past about bringing Formula 1 to the people, but it’s never been done quite so spectacularly before.

The stars of the show
As well as some amazing drivers, some truly iconic cars turned up to race up and down Whitehall, in the shadow of 10 Downing Street. The top teams all brought their recent F1 cars, but from the past there were two stunning machines that particularly stood out. Ayrton Senna’s 1990 championship-winning McLaren Honda took to the streets, driven by Stoffel Vandoorne. And the very first turbo-powered Formula 1 car, the 1977 Renault RS01 from 40 years ago, was driven once more by its original star, Frenchman Rene Arnoux.
After an afternoon of build-up from lunchtime onwards, all the cars headed out for some unforgettable demonstration laps on a specially-built circuit in the late afternoon. “I really enjoyed it,” said Austrian Grand Prix winner Valtteri Bottas. “I’ve never done anything like this before and it was a really great experience.”
Not just the drivers but other celebrities were in evidence too: including Naomi Campbell – who posed for photos in race overalls with Sebastian Vettel and Kimi Raikkonen.
The star of the show? Probably Daniel Ricciardo. For safety reasons, the organisers had asked the drivers not to do doughnuts – yet the Red Bull driver ended up doing something that looked suspiciously like a P Zero-flavoured doughnut. “It was just a controlled slide!” he quipped afterwards. “The fans came here to see a show. If I gave them a big cheer, then job done.”
Too right…

A new chapter opens
What just happened on the streets of London was frankly surreal. In fact, until only 24 hours earlier, nothing was officially happening at all; as the event was only announced the day before it took place to avoid overcrowding. Put simply this incredible show was a masterful success that brought the promotion of the sport right into the 21st century. The cars used Pirelli’s demonstration tyres and the drivers got stuck into the action to give them plenty of abuse. The smell of burnt rubber was an essential part of the ambience, but the most prevalent smell was the one of change. As a piece of guerrilla marketing, it was second to none – the Mayor of London has even said that he’d be interested in hosting a Formula 1 race in the British capital one day.
Most of all, it opened doors into a sport that has often been portrayed as being closed and exclusive. The drivers met the fans, even grabbing their phones to capture some unique selfies that will form the basis of some amazing memories in years to come. And that’s what the live show was all about. Creating memories that will last into the future and inspire a whole new generation of fans. F1 Live London was a genuinely ground-breaking moment.