No Blancpain,
no gain

Another season of GT racing draws to a close. And here’s what we’ll remember… 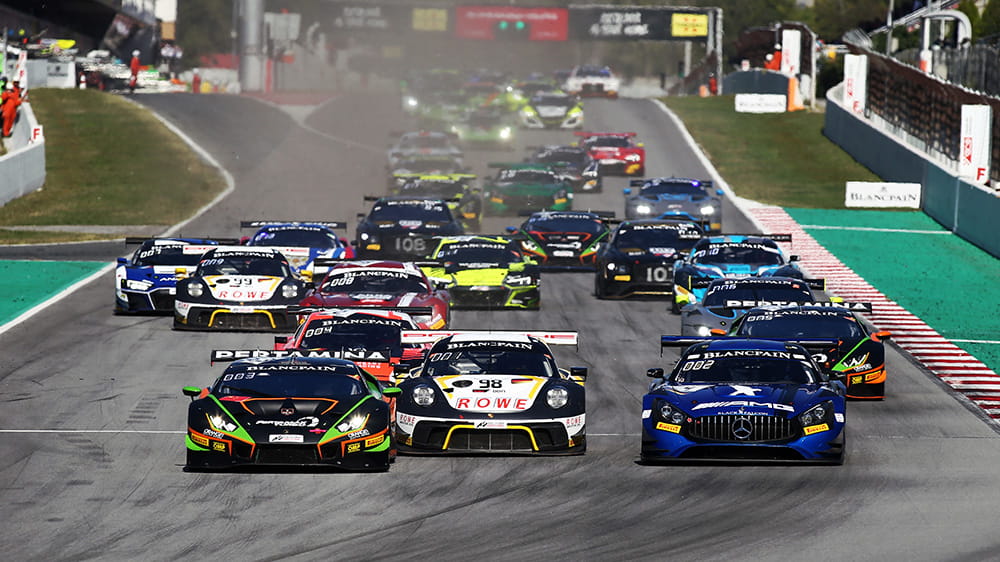 We are the champions

The curtain has drawn on another Blancpain GT Series, which featured 10 weekends of racing all over Europe, most recently the finale at Circuit de Barcelona-Catalunya in Spain where the winners were decided and it went right down to the wire.

This is the first time that single crew of drivers have held all three championships at one time: a true testament to the Chinese-Italian Lamborghini team, Orange1 FFF, which was competing for the first time in Europe this year. The team showed both consistency and pace with nine podium finishes across the season. In the end, they took Blancpain GT Series victory with 185 points: 28.5 points ahead of their closest rivals, Black Falcon, which runs a Mercedes AMG GT3.

Caldarelli said: “Thinking back to 12 months ago, we had none of the 48 people who currently work for us now. It’s a big achievement and I am extremely proud of all of them. We are here, celebrating three championships, and all of this goes down to the fantastic job that we did during the winter. These titles are really difficult to win, not just on-track but also away from the track."

Mapelli added: “This was quite unexpected, especially the Endurance Cup title. I think we did a good job this season and I’m proud of the team because, without them, we wouldn’t be here as champions today.”

Keeping it on the road

And they did all this on Pirelli tyres, the long-term exclusive tyre supplier to the championship. Across the season Pirelli has equipped all 11 manufacturers on the grid: Aston Martin, Audi, Bentley, BMW, Ferrari, Honda, Lamborghini, Lexus, Mercedes, Nissan and Porsche as well as the support series such as Lamborghini Super Trofeo and Blancpain GT Sports Club. Most of these use Pirelli tyres as original equipment for their high-performance road tyres too.

It’s a large operation and Pirelli doesn’t just bring tyres. Around 20 people from Pirelli go to each round of the championship, providing the highest levels of support to customers.

One of the highlights of the Blancpain GT Series is the 24 Hours of Spa, which took place in July this year. It is the ultimate test for drivers, mechanics and the cars and this year the #20 GPX Racing Porsche 911 GT3 R piloted by Richard Lietz, Michael Christensen and Kevin Estre took first place, completing 363 laps of the gruelling Spa circuit despite a lengthy stoppage in the morning. It’s Pirelli’s biggest single event of the year too, with around 13,000 tyres brought to the event. Another highlight for Pirelli is the season opener at Monza, just 20 kilometres away from its Milan headquarters. This year, Italian outfit Dinamic Motorsport took a spectacular debut victory in wet conditions with their Porsche 911 GT3 R.

But it wasn’t all about racing on the track, as running alongside the main action was also the SRO E-Sport GT Series. E-Sport drivers took on the famous Blancpain GT Series circuits virtually throughout the season, just like the real thing. And the drivers behind the consoles take it every bit as seriously as those in the actual cars. Pole Kamil Franczak from Thrustmaster e-Sports was crowned champion in Barcelona, followed by Italian Ferrari Driver Academy E-Sports Team representative David Tonizza in second, and finally Kamil Pawlowski in third, also from Poland and Thrustmaster e-Sports. At every round the top three E-Sports racers were awarded on the podium ahead of the winners of the track action. And with gamers having shown themselves to be equally capable on the track in the past, thanks to ground-breaking initiatives such as the Nissan GT Academy, this might just be the start of something big.

Read more
Related Stories
The great Scots
on top in British GT
race
Back
to the future
race
Lexus RC F GT3,
a brand built for challenges
race
MOST READ
Getting the show
on the road