Kenan Sofuoğlu, pride of Turkey with his numerous victories and titles in Supersport World Championship, visited the Izmit Factory of Turk Pirelli. Sofuoğlu, while racing for the championship title for the 5th time this year, made important statements to pirelli.com 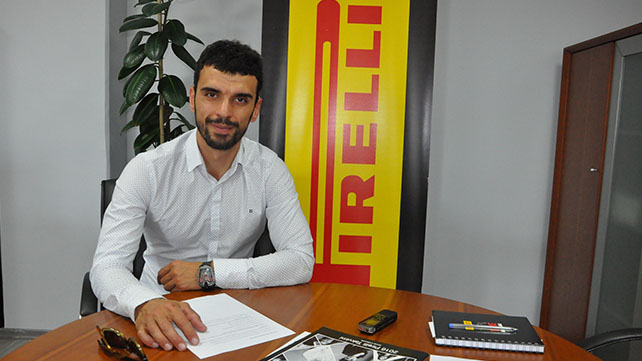 Turkish national motorcyclist Kenan Sofuoğlu, who is close to his fifth title in Supersport World Championship this year, visited the Turk Pirelli Izmit Factory. Sofuoğlu, who has won the title for four times with Pirelli tyres, has told less known details about himself to pirelli.com.

My greatest dream is to raise a pilot for Formula 1® from Turkey
Sofuoğlu said that he is a loyal follower of Formula 1® other than superbike races. “Although we are dealing with a different segment of racing, one of my greatest dreams is to train an athlete to Formula 1®. Why wouldn’t a country with a population of 80 million people raise a Formula 1® pilot? I don’t know if it comes real, yet this is a dream of mine. I am busy with my sports now. I haven’t made any efforts yet, but one of my dreams is to train a Formula 1® pilot and to stand by him. Besides, I have already trained some sportsmen for motor sports. I am trying to coach them to be able to win the world champion titles in the future. I strongly believe that one of my students will become world champion in 2 or 3 years. But for now, I want to pursue my career in my segment of sports for 2 more years.“

The most special one is my 2015 title
Stating that the very first championship title of him in 2007 was the most beautiful one, Kenan Sofuoğlu emphasized however that the most meaningful and precious one is the title he won in 2015. “It was a title coming after a struggle during hard times. We are leading the championship this year too. The last race was under rain in Malaysia. We are racing against hot, cold or rainy weather and we hope to win the 5th title” added Sofuoğlu.

I motivate myself by visiting Turkey beforehand of the races
One of the secrets to his success is sparing time for the activities he likes to do Sofuoğlu said, adding: “I motivate myself visiting my home city Sakarya in Turkey. It’s not easy to find many things to be happy in life, therefore one should spare time for things he likes to do. Some are willing to benefit from their leisure time by travelling. I prefer to spend mine by dealing with my car and repairing my bike and such. I value being together with people i love and spending time with them. Thus I meditate my mind and find opportunity to rest apart from my job. I take my inspiration from here and go for the races, and I always do my best to achieve success.”

I owe my success to my family
Kenan Sofuoğlu pays tribute to his elder brother, through him he tells he started his career, and adds “I have been racing for 16 or 17 years and I have achieved 4 world championship titles. I owe this success primarily to my family and my elder brother who made me start performing this sports. The most important advice in my career came from my elder brother Bahattin. He was professional racer in Turkey while i have just begun. Persistently told me ‘don’t push hard for the first three laps, after that you can force as much as you want and you won’t fall down easily if you do that’. This is on my mind for years, i didn’t understand what he meant at that time but i clearly do now. Because at the beginning your tyres would be hard when you start to race. Your tyres will begin slightly pushing and stretching out at the next laps of the race. This expansion makes the pilot feel the track more. In my career, mostly I start cautious in the first laps and wait for the sensitivity the tyres will give afterwards. You don’t suffer from falling down easily when you do that. Of course it is very normal to fall down in that kind of races, because you ride your bike up to limits but your risk decreases considerably. In my championship titles, this kind of advices have a valuable place.”

I am inviting youth not to streets but to race tracks
As stating there are many speed lover youngsters in Turkey, Kenan Sofuoğlu emphasizes unfortunate races and accidents occur in daily traffic. While warning young people to keep themselves away from those sorts of races for the health of their own and the others, Sofuoğlu also said: “While I’m telling this, I know we suffer from accidents on race tracks too. Unfortunately there is no guarantee that they won’t happen. But as much as possible we are trying to satisfy our speed passion on tracks we race. I demand the same from the young ones, I recommend them to race for a purpose on tracks. A pity that there are not enough number of race tracks in Turkey yet. But we have good projects. We are trying to make more young people take part on these tracks. We are now building a track in Düzce. When it’s finished, we hope more young people will easily benefit from this race tracks.”