It is the symbolic track for racing on two and four wheels: the name Imola brings to the minds of fans and engine enthusiasts history and tradition, which are rendered all the more significant by the dedication to Enzo and Dino Ferrari. 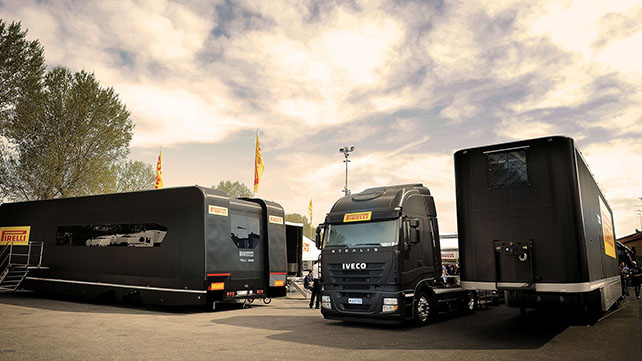 Situated on the banks of the Santerno, the Race Track embraces within it the Parco delle Acque Minerali and it extends along 4936 metres in its configuration for motorcycling races: boasting 9 right-hand corners and 13 left-hand corners, with racers covering the track in an anti-clockwise direction.

The pole position line-up is located on the left-hand side: the radius of curvature of the corners varies from a minimum of 11 metres to a maximum of 94 and the rectilinear arrival stretch is 350 metres long.

The “Enzo e Dino Ferrari” International Race Track has proven to be a particularly technical track that is difficult to tackle considering the complex nature of its corners and straights: in addition, it requires excellent levels of expertise to cover both by bike and by car.

Rear tyres are stressed, especially at medium to low temperatures due to the aggressive road surface, which was covered with new asphalt for about 70% of its length in August 2011: this resurfacing and modernisation work also led to the acquisition of a good level of mechanical grip.

The extremely technical layout of the circuit in Imola offers a mixed range of stresses when it comes to front tyres, without any particular critical areas for soft and robust versions: the wide corners, bold straights, numerous chicanes and slopes require a stable tyre that is designed to withstand strong levels of stress, as in the case of the Rivazza, where the load on the front doubles in half a second, shooting up from 125 kg to 250 kg.

Another very interesting stretch is the Tosa Corner, which is very slow, where the rear tyre takes on a narrowed and elongated tread on the ground: despite this, it provides the necessary traction without losing any lateral grip.

At the Variante Alta, the passage from one side of the tyre to the other occurs very quickly, with the internal temperature going from -55° to +55° at a speed of 100°/s. During the first stretch of the variant, the tyre helps the opposite side of the tyre compound to heat up via the steel belt, thereby guaranteeing the effective passage of heat in less than a second.

The current layout of the circuit dates back to 2009, with the modification of the new Variante Bassa, which completed a long series of reconstruction and modernisation works designed by the race track architect, Hermann Tilke, which had begun with the demolition of the old pit garages and paddock, that were knocked down on 19th November 2006 with a charge of 700 dynamite sticks.

The circuit dedicated to Ferrari is the result of a concept by a group of youths in the immediate post WWII period, to create a permanent race track in the Castellaccio area in Imola: indeed, it was initially called the Circuito del Castellaccio (Castellaccio Circuit). The CONI (Italian National Olympic Committee) joined the project with the aim of building a genuine circuit, called Prototipo Coni (Coni Prototype) and designed specifically to host motorcycle races.

After it was inaugurated with the CONI Grand Prix on 25th April 1953, Imola took on strategic importance in the motoring world: it made its début in Formula One in 1963, when Jim Clark won in a Lotus Climax BRM, whereas spectators had to wait for the 1967 edition of the National GP for the first MotoGP race.

Following extensive refurbishment and modernisation works, F1® returned to Imola in 1979 with Niki Lauda winning in a Brabham: switching to its new name of San Marino Grand Prix, in 1981, Imola became internationally famous and a symbol of the bike and car racing world.

Imola is doubly linked to the Ferrari Race Team: the name of the circuit dedicated to Drake and his eldest son, who died in the 1950s, is a heart-felt tribute by the Management of the circuit to the death of Enzo Ferrari in 1988.

Imola experienced its annus horribilis in 1994, when both Ayrton Senna and Roland Ratzenberger died: the Tamburello and Villeneuve corners, scenes of the fatal accidents, were turned into two slow chicanes, whereas the Acque Minerali were modified with the addition of extensive escape routes: these radical modifications were made concurrently with the improvement of international safety regulations for drivers and track staff.

With the new millennium, Imola saw the re-ignition of a passion for engines and motor racing, thanks to the début of the Superbike World Championship in 2001. Cars also made a come back to the track between 2004 and 2005, with the European Championship for GT cars and the FIA GT World Championship.

After Tilke's intervention, Imola once again hosted the WSBK tests in July 2009, before the long-awaited return of the actual WSBK races in September of the same year.

The last edition of the MOTUL FIM Superbike World Championship saw the undisputed domination of Jonathan Rea (Kawasaki Racing Team), who won in race-1 and in race-2.

The rider from Northern Ireland took the lead at the end of a first round split into two due to the Red Flag, over his team mate Tom Sykes and the Ducati rider Davide Giugliano (Aruba.it Racing-Ducati SBK Team). In race-2, Rea defeated his competition, gaining more than four seconds on Sykes: third podium place for the rookie Jordi Torres (Aprilia Racing Team – Red Devils) who was more than 26 seconds behind.

Kawasaki domination last year was also completed by the victory in Supersport for Kenan Sofuoglu, ahead of the MV Agusta Cluzel-Zanetti pair. There will also be room for the third seasonal round of the Superstock 1000 FIM Cup and WIL Sport European Junior Cup.

Read more
Related Stories
The Assen TT circuit from a tyre point of view
race
The Holland you are not expecting of nature, history and motorcycles
race
The most extreme competitions
race
MOST READ
Getting the show
on the road