Mercedes:
the rule of three

Mercedes, world champions. For the third time on the trot. And with a technical advantage, if such a thing were possible, that’s even bigger than the one they enjoyed for the last two seasons 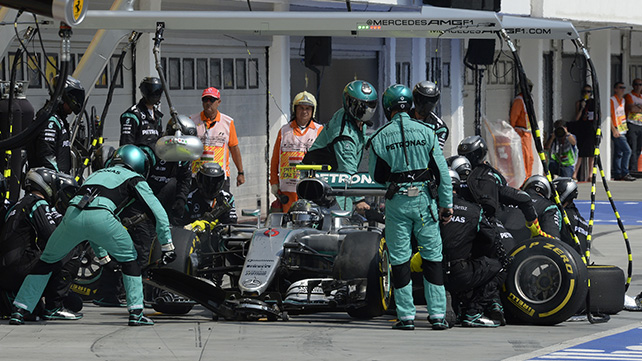 So now the constructors’ world champions wrap up the title with four races of the season still left to go. It’s the sort of thing reminiscent of Ferrari’s golden age, which in the early 2000s used to bring both titles back to Maranello by mid-summer. Thankfully for F1® fans, the drivers’ title battle between Nico Rosberg and Lewis Hamilton continues – otherwise we may as well all head off skiing right now...

So congratulations to Mercedes. Their silver war machine has become the reference point for the new hybrid grand prix era. Since the new engine formula, complete with energy recovery systems, was introduced at the start of 2014, the on-track battles have been dominated by the squad led by Niki Lauda, Toto Wolff and Co. And congratulations to Pirelli as well: the P Zero tyres have always stepped up to whatever technical demands the awesome Silver Arrows placed on them.

With this latest championship success, Pirelli also plugs a hole that dates back to the 1950s. Back then was when modern Formula 1® was born, complete with its own formalised championship for the first time. In 1950, the first season, only two names competed that are still around now: Ferrari and Pirelli. The Italian tyres had the lion’s share of success for four seasons: Giuseppe Farina and Juan Manuel Fangio were champions with Alfa Romeo in 1950 and 1951; Alberto Ascari triumphed with Ferrari during the following two years. There was one common denominator between all those titles: Pirelli. And our tyres continued to win in the following years: 1954 with Fangio and Maserati, and again with the five-time champion Argentine in 1957: his final title, sealed once more with Maserati.

But interposed between these successes was a black hole called Mercedes. In the Silver Arrow, it was Fangio again who dominated the 1954 and 1955 championships. During the first of those two championships, there was a consolation prize for Pirelli, which were the winners’ trophies from the first two races of the season (claimed by Fangio in a Maserati with the Italian tyres fitted). However, the majority of those successes during that period – which led Mercedes to quit F1® in the mid-1950s, having dominated everything – were achieved by Fangio on rival tyres.

Now that hole has been plugged. Pirelli has brought a big contribution to this third consecutive title, as the result of a technical partnership that Mercedes shares with the Italian tyres on everyday roads as well as the race track, fitted to cars that are at the very top of the range when it comes to performance, equipment and prestige. Very often the top Mercedes road cars are fitted with Pirelli tyres as original equipment, as can be seen at motor shows around the world where the number of P Zero homologations continues to increase.

So once again, a big ‘well done’ to Mercedes. And this is where Pirelli’s second three-year term in Formula 1® concludes, in the latest sporting chapter of its grand prix history. The first three seasons were dominated by Red Bull; now Mercedes have matched that achievement in the second term. So now we embark on another three-year stint, which will keep Pirelli as Formula 1®’s technical partner until the end of 2019. Will the rule of three continue? Is another manufacturer going to dominate the next three years? The men and women from Stuttgart and Brackley will be hoping not.

Read more
Related Stories
Who can be the last
of the late brakers?
race
F1 goes wide
race
If you build it, they will come
race
MOST READ
Getting the show
on the road