Lord of the Ring

The Nürburgring has an illustrious past: one of the most evocative names in all of motorsport 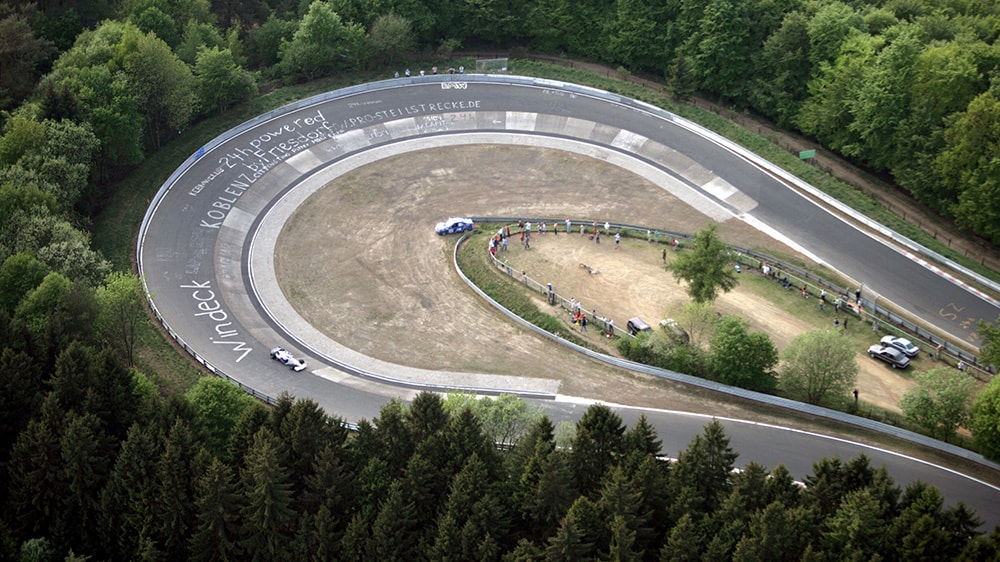 From the north loop to the south

The modern Nürburgring grand prix circuit hides something of a secret in the trees beyond its gravel traps and tyre barriers: the colossal Nordschleife. At 20.8 kilometres – four times the length of the regular 5,1-kilometre Grand Prix circuit – it’s the longest and most fearsome permanent circuit in all of motor racing. When the track was inaugurated in 1927, it measured nearly 23 kilometres.

More so than the length, it’s the constantly flowing bends, elevation changes and the proximity of the crash barriers that make the Nordschleife quite so demanding for the drivers. The Nürburgring was laid out in the Eifel mountains around the town and castle of Nurburg in the 1920s and hosted its first German Grands Prix soon afterwards: initially on an even longer layout – Gesamtstrecke - that combined the Nordschleife (or ‘north loop’) with the shorter Sudschleife, located where the current GP circuit is.

Part of the Formula 1 calendar from 1951, the Nordschleife proved to be challenging enough on its own as the speeds of the cars increased. It earned the nickname “The Green Hell” from Jackie Stewart after he won the 1968 race by more than four minutes in heavy rain and fog. After drivers boycotted the 1970 race on safety grounds some modifications were made, like smoothing out some bumps and jumps, but much of the danger remained and it was impractical for the demands of television. The final F1 race on the Nordschleife was held in 1976 – marked by the fiery crash in which Niki Lauda suffered life-threatening burns as well as smoke inhalation that damaged his lungs.

Try the F1 technology on your car, click here

Formula 1 moved to Hockenheim before returning to the Nürburgring on the brand new Gp-Strecke Grand Prix circuit in 1984, but racing has continued on the Nordschleife in other categories: especially GT and endurance racing. The highlight is the Nürburgring 24 Hours, held on a 25,3-kilometre layout that combines the Nordschleife and the Grand Prix circuit. It’s one of the milestones of the endurance racing calendar: not as well-known as Le Mans but certainly just as challenging – if not more so considering the difficulty of the circuit. Earl Bamber, who has won at Le Mans twice with Porsche, once commented that Le Mans was pretty straightforward compared to the multi-faceted demands of the Ring.

Often adding to the demands are the weather conditions, which are notoriously changeable in the Eifel region. In 2016, the 24-hour race was red-flagged for nearly three hours after a hailstorm hit parts of the circuit, making it undriveable. A different race in April 2019 had to be cancelled after snow began to fall.

In the 2020 running of the 24-hour race it was heavy rain in the middle of the night that caused a stoppage for over nine hours. The eventual victors (Nick Catsburg, Alexander Sims and Nick Yelloly) therefore covered less distance than usual in their BMW M6 but were still worthy winners given the conditions were some of the toughest any modern racing drivers are likely to ever have to deal with. It’s not impossible that the Formula 1 race will feature similar weather. In ambient temperatures below 10 degrees centigrade, there is also a risk of ‘cold cracks’ in the tyres: small cracks requiring the tyres to be replaced for safety reasons.

Even beyond sportscar racing, the appeal of the Nordschleife remains. A racing return there for F1 would be impossible, but that didn’t stop BMW from running some demonstration laps in 2007 with Nick Heidfeld behind the wheel. It was done mostly for the cameras, rather than to try and set any records, but the German driver enjoyed it nonetheless. “Beforehand I thought the Nordschleife wouldn’t suit a modern Formula 1 car but it wasn’t true: it suited the car perfectly,” he said recently. That’s not the majority viewpoint among the drivers though…

Record attempts around the Nordschleife are otherwise commonplace, especially for road car manufacturers, who use the track to refine and demonstrate the handling of their latest creations. One notable production car record was broken by Marco Mapelli and Pirelli, who lapped the Ring quicker than anyone else with a road-going Aventador SVJ in 6m44s in July 2018.

The most special record-breaking bid though came a month earlier, when Porsche took an unrestricted version of its all-conquering 919 Hybrid LMP1 car to the Nordschleife and Timo Bernhard set an almost unbelievable lap time of 5m19s. It’s hard to imagine that ever being beaten.

That’s the best part of a minute quicker than the previous all-time lap record that stood for 35 years, achieved by the late Stefan Bellof in 1983 qualifying for a 1000-kilometre world sportscar race with the Porsche 956.

Bellof’s lap, with an average speed of over 200kph remains some way ahead of the current GT3 pace (seen in the modern 24 hours) and may never be beaten in competition conditions as long as the Nordschleife stays off limits to the fastest categories in motorsport. But never say never.

Read more
Related Stories
When it’s time to change from slick to wet tyres in Formula 1
race
F1 arrives in Russia: the future of sports
race
F1 Mugello GP: history of the italian circuit
race
MOST READ
Circularity in Transportation: already a reality
Pirelli joined The Ray, an organization...
WANT TO KNOW MORE