The History of the Car –
Lamborghini Huracán GT3 EVO

Improving the "bull" that had already reaped 12 international titles was a tough call. But the Lamborghini Racing Team succeeded 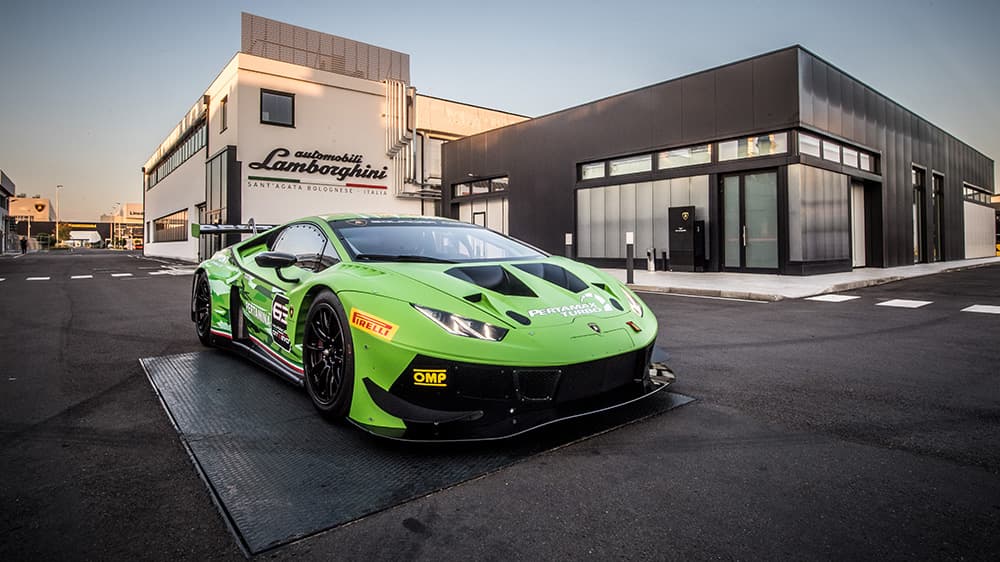 What better way to strike fear in opponents for a new car if not to win its debut race? This result was achieved by the Lamborghini Huracán GT3 EVO, the latest version of the coupé made in Sant'Agata Bolognese. On its first appearance on the track – precisely in January 2019 at the 24 Hours of Daytona – the green "bull" of the GRT Grasser Racing Team won the race and set a new record, making Lamborghini the only manufacturer to have won the endurance race at Daytona Beach twice in a row. The Huracán GT3 had in fact come first in 2018. It showed that the car was as young as ever but the Lamborghini Racing Team set themselves the goal to improve the already-perfect recipe all the same. So, the Huracán GT3 EVO was born.

"The new Huracán GT3 EVO capitalises on the experience gained over the past three racing seasons on circuits worldwide. The main objective during its development was to improve drivability to make the car easier and more predictable for gentlemen drivers, with low total cost of ownership for the team", explained Giorgio Sanna, Head of Lamborghini Motorsport, recounting the genesis of the new racing brute developed entirely in Sant'Agata Bolognese.

The engineering work took over a year and focused particularly on aerodynamics in collaboration with Dallara, the Parma-based company with over 40 years of experience in motorsports. By implementing one-of-a-kind solutions, the aerodynamic load was considerably increased to further improve stability and reduce aerodynamic sensitivity to pitching. Major changes can be seen on the front end, specifically on the splitter, the pronounced leading edge and the bonnet. Made of carbon fibre instead of fibreglass and with a large central rib carried over from Huracán Super Trofeo Evo, the cooling capacity of the radiator has been boosted even further. The bumper has brand-new side recesses housing two large flicks to ensure a high load on the front. The rear end is dominated by large carbon fibre wing displaying ends modelled with two twists designed to optimise aerodynamic efficiency assisted by a diffuser with redesigned fins.

The mechanics were developed by modifying the front suspension kinematics, supported by arms carved from a solid block of aluminium instead of being made of steel, to the benefit of roll and connection between the two axles. The rear axle also underwent serious upgrades. It now has new hubs, bearings and drive shafts with tripods instead of CV joints for better transmission efficiency and ease of maintenance. The Öhlins shock absorbers, now four-way, were chosen to ensure optimum monitoring during roll and while cornering at high speeds.

In regard to electronics, noteworthy is the introduction of EHPS (Electro Hydraulic Power Steering), already effectively tested on Huracán Super Trofeo Evo, with control to adjust the level of assistance on-the-fly during the race. Also new is the ABS, with the adoption of the recent Bosch ABS M5 for the best braking control.

Propulsion is entrusted to the V10 aspirated 5.2-litre engine derived from the one equipping the latest street-legal Huracán with new camshafts and titanium valves to optimise drivability and improve reliability in endurance races.