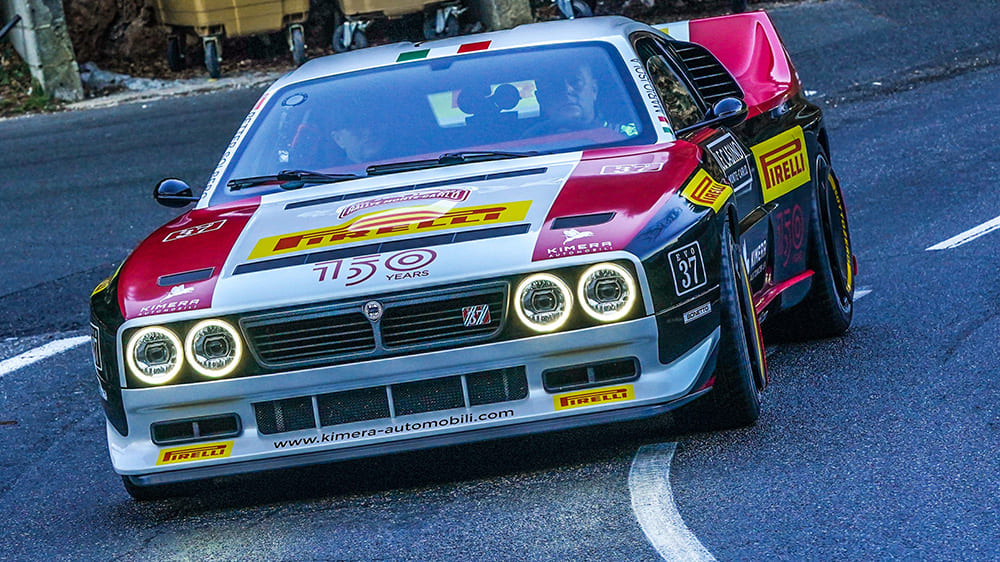 THE STAR OF SHAKEDOWN

There was an air of excitement around the harbour in Monaco. More than usual for early on a Thursday morning. It was the beginning of a new era in the World Rally Championship: with a new generation of hybrid-powered Rally1 cars leaving their service areas dotted around the harbourfront, bound for a short shakedown stage on a nearby mountain road. After months of hard work and testing, this was the first and only chance to see how the new cars compared on the same piece of road before Rallye Monte-Carlo got underway for real.

Following the state-of-the-art Rally1 machines into the shakedown was another new car, albeit one with an obvious nod to the past. This was the Kimera EVO37, a car inspired by the legendary Lancia 037 which won Rallye Monte-Carlo in 1983 in the hands of Walter Rohrl.

The Lancia 037 was an icon of the evocative Group B era. In contrast to today’s hatchback World Rally Car designs, the Lancia was a pure mid-engined sportscar, with a sleek shape not seen since at the highest level of rallying. Rohrl’s win in Monte Carlo in 1983 on Pirelli tyres was the car’s first victory, and it went on to claim that year’s manufacturers’ championship: the last rear-wheel drive car to do so before four-wheel drive technology took over for good.

The Kimera EVO37 is the brainchild of Luca Betti, a former WRC driver who wanted to celebrate a rallying legend with a modern reimagination, respecting the original design while making use of the latest cutting-edge technologies. Just 37 are being produced, and this particular EVO37 was entrusted to a very special crew.

While the original was famed for its Martini stripes, this car was decked out in a special Pirelli livery to celebrate the company’s 150th birthday. It was one of several anniversaries being marked, together with the 90th running of Rallye Monte-Carlo and the start of the WRC’s 50th season. And getting behind the wheel was none other than Pirelli’s Head of Motorsport, Mario Isola.

He might be best known for managing Pirelli’s different motorsport activities around the world, but Isola also has plenty of experience behind the wheel. His first job with Pirelli was as a test driver for its road car products and he’s also taken part in several rallies himself – as well as being a volunteer ambulance driver.

In a much less familiar position though was his co-driver, Petter Solberg. As the 2003 World Rally Champion, Solberg is used to receiving pace notes rather than giving them: even though he has previously been a passenger alongside his young son Oliver, who is now driving for the factory Hyundai team in the WRC.

Fortunately, Isola and Solberg have a close relationship dating back to 2003, when Solberg won the world title using Pirelli tyres and Isola was managing the Italian company’s rally programme.

REMEMBERING THE PAST AND CELEBRATING THE PRESENT

That’s just as well because the shakedown took place on a particularly narrow and twisty road even by Rallye Monte-Carlo’s standards, with plenty of ice and little margin for error. Solberg seemed the more nervous of the two but he need not have worried. The pair safely made it through the shakedown stage and thoroughly enjoyed their experience aboard the Kimera EVO37, which also brought an extra smile for the fans who saw it pass by. In fact, it was one of the most popular cars in Monaco, remaining on display at Casino Square throughout the rally. The competing drivers had no need to worry about their stage times being beaten, but the EVO37’s run provided a nostalgic reminder of rallying’s glorious past as the sport looked ahead to a thrilling 2022 season.

“This was a fantastic way to help Pirelli celebrate its 150th anniversary: it’s not every day that you get to drive an amazing car like this with a world champion as your co-driver!” said Isola. “I’d definitely do it all over again, but I’m not sure if Petter would!”

The Norwegian had a lot of fun too – but he’s certainly not planning to make a full-time switch to the right-hand seat. The best part of his day was driving the Kimera back to the service park after the shakedown.

“I’ve never really made pace notes before,” said Solberg, holding up the book of notes that he’d prepared the night before – in the dark on the stage with Isola. “Can you tell?”

Read also: The evolution of the species