He made his debut in competitions, from rally to Formula 1, also winning the 24 hours of Le Mans. In 1972 at the head of the world championship, he died in an accident at Monza circuit. But at the end of the season he still graduates champion 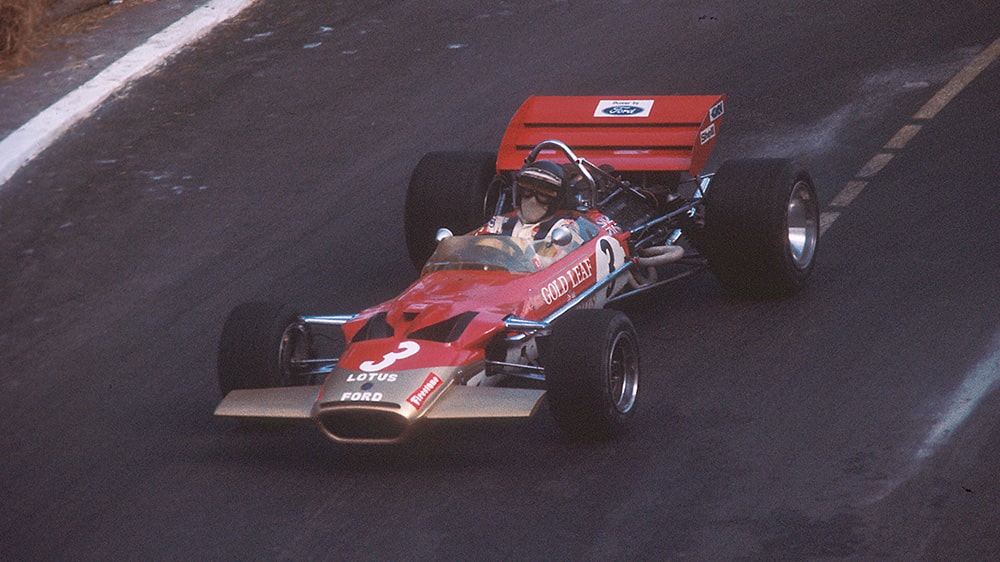 He won the Formula 1 World Championship aged 28 (which back in 1970, was still young in grand prix terms) but never knew it. That sums up Jochen Rindt’s all too brief time on earth: a German by birth but an Austrian by passport who stood for speed with a capital S. That raw speed was his truly defining characteristic, yet he’ll always be known as Formula 1’s only posthumous world champion.

The young Jochen, born in Mainz, Germany, lost his parents in an allied bombing and was brought up by his paternal grandparents in Austria. Right from the beginning, cars and races were his overriding passion. He wasn't even 20 years old when he sold the small company he had inherited from his father and bought a Simca Montlhery, which he began rallying with.

Jochen then quickly switched to touring car racing, driving an Alfa Romeo Giulietta Ti, which mapped out his destiny on the world’s racing circuits. In 1963 he made his Formula Junior debut, then the following year he made the step up to Formula 2: where he would collect pole positions and victories right up to his untimely death (at a time when even the top drivers regularly raced in Formula 2 as well as Formula 1).

At the Crystal Palace circuit close to London, Rindt beat Graham Hill, Jackie Stewart and Jim Clark. This opened up the doors to Formula 1 – but he also won the 1965 Le Mans 24 Hours with a privateer Ferrari 250LM, entered by the North American Racing Team.

Brabham, Cooper and then Brabham again: these were the cars that Rindt drove during his first four seasons in Formula 1, making his debut at home at the 1964 Austrian Grand Prix. They weren’t easy years; after a few misadventures, he finally claimed third in the 1966 championship, and scored five podiums up to the end of 1968 . By then, he had developed the reputation of being a driver who was indisputably fast but incapable of finding the regular consistency needed to clock up wins.

In 1969 he joined Lotus alongside two-time reigning champion Graham Hill. At the Spanish Grand Prix he suffered an accident through no fault of his own, sustaining concussion from which he took a long time to recover. Denis Jenkinson, the renowned British journalist famous for winning the super-fast 1955 Mille Miglia alongside Stirling Moss, wagered: ‘when Rindt wins a grand prix, I’ll cut off my beard.’ This was quite some statement, as the diminutive Jenkinson was renowned for the length of his luxuriant beard. But Jenkinson’s facial hair was soon in jeopardy, as by October Rindt had won the United States Grand Prix at Watkins Glen, igniting what would go on to become a stellar career at the top of the sport.

In 1970, the Lotus 72 – designed by the genius called Colin Chapman – was practically made to measure for Rindt. The results came instantly: five pole positions and five grand prix wins at the start of the season. Rindt came to Monza in Italy, at the start of September, in a clear lead of the championship. But a sickening accident in practice, caused by a mechanical failure, fired his Lotus into the outside of the famous Parabolica, where it snapped in two after impacting the barriers. The consequences were terrible: Rindt was extracted in critical condition but then died in the ambulance.

After Monza, over the final three races that made up the championship, Ferrari’s Jacky Ickx claimed two wins and a fourth place that allowed him to make up 21 points on the Austrian ace. But the Belgian was still missing the six points more he needed to claim the title.
That was how Karl Jochen Rindt lived and died: with an other-worldly turn of speed that took him to places on the track that no other drivers dared to go; finding grip that seemingly didn't exist.

He was a man and driver firmly of his time: on anyone else a long fur coat would have looked ridiculous, but the image of him wearing one in the pits will endure forever, looking magnificent. Just like the memory of his extraordinary talent, which was taken from us far too soon.

Read more
Related Stories
Mike Hawthorn,
a champion out of time
race
Jacques Villeneuve,
the rising and setting of the son
race
Jack Brabham,
a champion by accident
race
MOST READ
Italy expects as the new Luna Rossa sets sail