Jack Brabham,
a champion by accident

The legendary Australian claimed not only three world titles, but also forged a genuine link with a seismic moment of history in Formula 1: when the cars moved from being front-engined to rear-engined. Sir John Arthur Brabham – known simply as Jack to his friends – was the first Australian to truly make his mark on the international motorsport scene and left behind a stunning legacy. 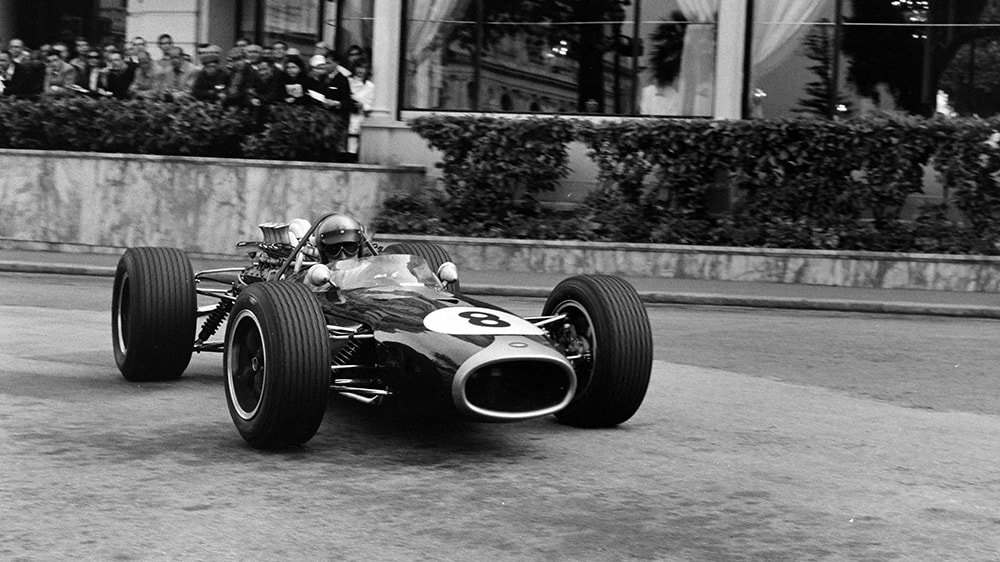 In 1966 he claimed his third and final title at 40 years old – still with a resplendent mane of jet black hair – having previously claimed the world championship titles in 1959 and 1960. It would take Jackie Stewart until 1973 to pull off a similar feat. Both of them were chasing a legend: in the 1950s, Juan Manuel Fangio had claimed no fewer than five titles. Yet Brabham, who became a driver almost by accident, was a very different animal to both of them.

For a start, he achieved something that nobody else has ever managed up to now: winning a world championship in a car that bears his name. Brabham was born on April 2 1926 at Hurstville, to the south of Sydney, and studied engineering. So it was perhaps no surprise that when the Second World War came round, the young Brabham did everything he could to join the Royal Australian Air Force. He dreamed of flying but ended up as a mechanic – which would play a formative part in his future destiny. By the time he was 20, he had opened a car repair garage in Sydney. The war was coming to a close in Europe, but there were terrible reports coming into Australia about all the country’s young soldiers that had been killed as part of the allied forces fighting against Hitler. It was a friend of Brabham’s from the United States, Johnny Schonberg, who first took him to a motor race, for midget cars (small, front-engined racers). Schonberg wanted Jack to build him a car; the Australian agreed, and Schonberg went on to win many races. But then he decided to stop, leaving Jack with plenty of experience of race preparation and a car that wasn’t doing anything. So he decided to give it a go himself. It was the start of 1948 at Parramatta Park Speedway, in Granville: a suburb to the northwest of Sydney. He won the third race and went on to claim the national championship.

And that’s how Brabham’s career – which would lead on to many other triumphs – started: almost by accident. He became Australian stock car champion from 1949 to 1951 and expanded his reach abroad: contesting hillclimb competitions and tasting success as far afield as South Africa. At home, in Australia and New Zealand, he was winning everything: road races, circuit races, and hillclimbs. In 1955 he finally got to Europe, where his clear objective was Formula 1, which was in the height of the Fangio era.

Brabham looked for a team to make his F1 debut but it came to nothing. So he simply bought a car from the Cooper brothers, also suggesting that he linked up with them in a sort of sporting and technical partnership. They flatly refused (although they allowed him to put the Cooper name on his truck, just in case he came to something). It was time to improvise. Brabham bought and sold a few other racing cars to raise money for his family to come and join him in England. Making the most of every opportunity, he drove everything: Formula 2 as well as sports car races, where he began to taste success and make a name for himself in Europe. The breakthrough came in 1957, when the Cooper brothers let him drive their new rear-engined T43: a fresh technical concept that was revolutionising motorsport. Enzo Ferrari, who had swept to world championship success with drivers such as Alberto Ascari and Fangio, was not a fan, saying that: “the horses should pull the carriage, not push it.”

Providing the horsepower for the Cooper was a small 1500cc unit branded ‘Climax’: in essence, the very first customer team engine in Formula 1 history, which would go on to win 40 of the 73 races that took place between 1958 and 1965. Brabham was a true workhorse, but his early F1 results weren’t much to write home about. In Formula 2 and in sports cars he was highly successful though, winning the Nurburgring 1000 kilometres together with Stirling Moss. Aviation remained Jack’s true passion, and in 1958 he achieved his dream by qualifying for his pilot’s licence and buying a small twin-engined plane that he used to fly around to European races. In 1959 he claimed his first F1 title, thanks to two wins (in Monaco and Great Britain) as well as three other podium places. Nobody saw his title coming, with the Australian beating the favourites Tony Brooks and Stirling Moss. By contrast, he dominated the action in 1960, winning five races on the trot (Holland, Belgium, France, Great Britain and Portugal) to seal title number two. But he wasn’t about to taste similar success for a while longer. In 1962, Brabham founded the team that would carry his name, yet that season (and the three that followed it) would reap comparatively little reward. In 1966 his third title came, as unexpectedly as the first one. It was helped by Brabham’s switch from Climax to Repco engines and also by the acrimonious divorce between Ferrari and its star driver John Surtees. Brabham capitalised on this situation, and looked set to triumph in 1967 as well, but was beaten at the last minute by his team mate Denny Hulme: the first New Zealander in Formula 1, who unsurprisingly would later part ways with Brabham’s team and move to McLaren.

Brabham would continue to race right up until 1970: the year in which he would win the first grand prix held in Australia. But by the end of that season, at the age of 44, he was persuaded to step down and leave everything in the hands of his business partner Ron Tauranac (who three years later would hand the team over to a certain Bernie Ecclestone: the owner right up to the mid-1980s). Brabham retired to his native Australia, making a few appearances in Europe and the United States, where he followed the first steps in racing of his three sons: Geoff, David and Gary.

The last two tried their hands at F1, with only a modest degree of success. But Geoff and David both won the Le Mans 24 Hours, in 1993 and 2009 respectively. One of most recent Brabhams to make his name on a track is Matthew: Geoff Brabham’s son, who was a champion in America driving the fastest racing trucks in the world and has taken part in the Pirelli World Challenge as well. Sam Brabham, David’s son, has also raced Formula Ford and Porsches. But Jack Brabham never got the chance to celebrate the success of his grandsons, succumbing in Australia in 2014 to a liver disease that had affected him for years.