Its snow joke
in Sweden

Rally Sweden, the most challenging round of the World Rally Championship, is also where this year’s Junior WRC got underway. But conditions were far from ideal 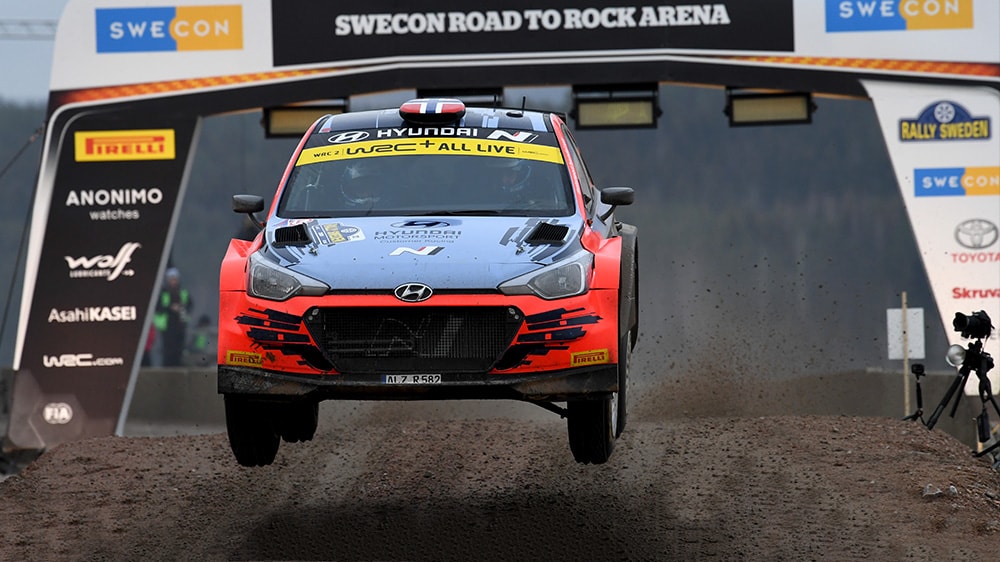 Keeping it on the road

As a rally driver, it might be disconcerting to place your trust in a pile of two-centimetre nails. But these are really important nails. They make the difference between traction and no action. Hero or zero.

Every single tyre on Rally Sweden is fitted with 384 metal studs, which are designed to cut through the surface snow and bite into the ice underneath. That’s 1536 studs on each car (actually, a few more if you include the spare wheels too).

For the Junior WRC Ford Fiestas, which use smaller tyres, there are ‘only’ 360 studs per tyre. But with 46 cars on the entry list in Sweden this year in total, that still makes a total of more than 60,000 studs on the road at any one time. Each stud weighs about four grams, so that’s the equivalent of more than 250 kilograms of metal being lugged around as well.

And the studs are only the tip of the iceberg: quite literally. Of the two-centimetre total length of each stud, only six millimetres protrude above the tread – which shows how firmly they are anchored in place. To keep them there, Pirelli has a patented system to cook the stud into the tyre during the vulcanization process. So it’s obviously a complex ritual.

The problem was, there wasn’t actually much snow in Sweden this year, which made conditions even more tricky than usual. With no snow, the studs don’t grip. And with no grip…it doesn’t take a genius to work out what happens next.

Ice and gravel for the Juniors

Part of the challenge for every driver in Sweden consists of keeping the studs in the tyres: not easy when there are patches of gravel just waiting to rip them out. This is something that drivers actually practise during pre-Sweden testing, deliberately seeking out gravelly sections on their test stages to replicate the tricky conditions when roads become degraded and tyres lose their studs.

And it’s particularly challenging for the Junior drivers, because they run right at the back of the field after the World Rally Cars, where the roads are rough and rutted anyway. This year, a strong field of 16 drivers contest the Pirelli-backed Junior WRC, all driving two-wheel drive Ford Fiesta R2Ts prepared by M-Sport Poland.

The 2019 runner-up Tom Kristensson from Sweden got off to the best possible start by winning his home round. Other returning drivers from last year include Latvia’s Martin Sesks and Estonian Ken Torn, who finished second and third in Sweden. Sami Pajari, winner of the 2019 Flying Finn Future Star prize, embarks on a full season together with compatriot Lauri Joona. Fabio Andolfi, a winner in WRC2 last year, moves into Junior WRC as one of four Italian drivers, along with Enrico Oldrati, Tommaso Ciuffi and Marco Pollara. Britain is also well represented with Jon Armstrong, Ruairi Bell and Catie Munnings. Raul Badiu of Romania and Fabrizio Zaldivar of Paraguay are two more returning drivers, with Sweden’s Pontus Lonnstrom and Norwegian Oscar Solberg – son of Henning – making their debuts on the series. The Junior WRC champion receives a Ford Fiesta R5 and Pirelli tyre package to make the step up in 2021 to the WRC2 and WRC3 classes: when Pirelli will be exclusive supplier to the World Rally Championship.

From snowy stages to snowy roads

So how good are these studded tyres? Unbelievably, the grip offered by studded tyres on snow is actually superior to that generated by treaded tyres on gravel. On gravel, a World Rally Car will cover about 125 metres as it accelerates from 0-100 kph. On snow, only  about 107 metres are needed to get to 100kph. That’s a whole 14% faster, give or take a bit.

This technology gets transferred directly to the everyday driver as well, as Pirelli’s road car tyres for extreme conditions are called Sottozero too, just like the tyres seen on the rally cars in Sweden. From motorsport, Pirelli learns how to make specific rubber compounds for cold conditions, how to design the best tread patterns to rapidly disperse snow, gravel, or slush and – for places where the weather is really extreme – how to produce the most effective studs. Rally Sweden is just another part of the research and development process.