Infant prodigies,
made by Pirelli

This weekend, rallying’s answer to Mozart occupies a factory seat for the first time 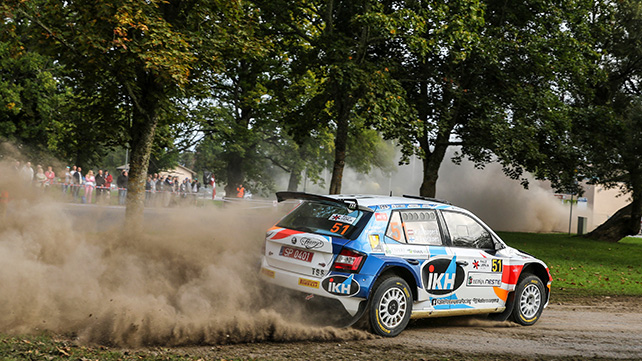 Too small to reach the pedals
New Zealander Mike Thackwell caused something of a sensation when he entered Formula 1® in 1980, courtesy of Tyrrell. At the time he was 19, which many confidently predicted would make him the youngest grand prix driver ever (although Ricardo Rodriguez and Jaime Alguersari could also lay claim to that accolade). In any case, the record stood until 2015, when a 17-year-old Max Verstappen started to make his mark in Formula 1®. Now, another driver has caused a sensation in international motorsport by making both of them look like pensioners.
Kalle Rovanpera originally shot to fame on YouTube, as an eight-year-old prodigy sliding a rear-wheel drive Toyota Starlet around on snow-covered stages back home in Finland. To watch, just click here: https://www.youtube.com/watch?v=ZyyWnUAgMQ4.
The pedals, steering wheel and gear lever had to be specially adapted so that he could reach them, but from the outside, it looked just like a seasoned professional with years of experience was driving.
Someone like his father Harri, for example, who when those videos first came out had just finished a distinguished career on the World Rally Championship with Seat, Peugeot and Mitsubishi: winning Rally Sweden in the process. After he retired, Harri had more time to dedicate to the talent he had spotted in his young son.
Kalle Rovanpera put in the hours and went from strength to strength. In a car at least, the youngster could seemingly do anything he wanted: apart from grow a beard, drink in pubs, and vote in elections. Or drive on the road.

Teenage kicks
So we have the tiny country of Latvia, population of just over two million, to thank for what happened next. In Latvia, there’s a rule that allows drivers as young as 14 to go rallying, as long as their co-drivers take the wheel on road sections. So that’s where Kalle went, along with his co-driver and mentor Risto Pietilainen: who co-drove for Harri for 13 years as well. That continuity and family feeling has been one of the biggest keys to Kalle’s success, who is still a bit timid in public and blissfully unaware – like a small Mozart – of just how talented he is.
But by the age of 15 he was already a champion, having dominated the Latvian national championship against vastly experienced opposition. At the start of this year he turned his attention to his native Finland, and duly became the youngest winner of any Finnish championship rally, aged 16. That’s also his current age as his birthday is 1 October 2000: even seeing the year written down is shocking.
So, Latvia may have been obscure. But everybody knows the Finnish Championship: it’s rallying’s spiritual home, where balls the size of small planets are required to succeed. And this baby-faced wunderkind somehow managed to win the first event. At the end of last year, he came to the Bettega Memorial in Bologna for the first time. He nearly won that too, on his World Rally Car debut. And as Kalle himself acknowledges, Pirelli tyres – which he has used from the very start of his career – were a key ingredient to all these unprecedented successes.

The story goes on
And so, the quiet 16-year-old comes to Italy, accompanied as always by his father and Risto Pietilainen. Using a striking Pirelli-liveried car, he’s signed up for the Italian Rally Championship this year, and his first two confirmed rounds are the Rally del Ciocco this weekend and the legendary Sanremo Rally two weeks after. He swaps the Skoda Fabia R5 he has competed in up to now for a Peugeot 208 T16 R5, but not just any Peugeot: instead he’s going to be team mate to multiple Italian Rally Champion Paolo Andreucci. In Paolo, he’s got the best possible teacher. In Peugeot Italia, he’s got a factory team that’s won the championship seven times in the last 10 years.
What you’re reading now are only the first chapters in an incredible story.