Hunting Supercars at the Blancpain GT

Meet Thomas Howarth: the Horsepower Hunter. And, somewhat less dramatically, our guest at Silverstone for the Blancpain GT 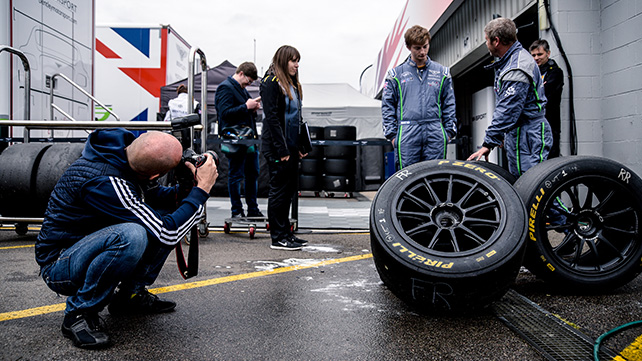 Hunting supercars on the streets of London is Thomas Howarth's natural habitat. So, when we plucked him out of the city and dropped him right into the centre of Bentley Racing's Blancpain GT team, was Thomas a fish out of water at Silverstone? Absolutely not! That is until Bentley drafted him to be a tyre tech, at least...

The Blancpain GT at Silverstone is a world onto itself. Arriving in the morning, ready to collect his many passes and eager to meet the Bentley team, Thomas was immediately greeted by a plethora of Lamborghini, Porsche, Maserati, McLaren and Bentley supercars. Presumably all of which were arriving to see their track counterparts take on the home of British racing.

A hunter's instincts were clearly on display as Thomas moved throughout Silverstone, capturing every novel arrival whilst deftly bypassing what had evidently become the norm for the veteran photographer in his stomping grounds around Kensington.

Before becoming immersed in the Blancpain atmosphere, we tore Thomas away from the captivating automotive sights to visit our Pirelli Activation Area in the centre of the circuit. This pop-up celebration of Pirelli motorsport featured a detailed Scalextric recreation of the Silverstone track alongside six linked VR stations. After signing up, would-be virtual racing stars don a VR headset and test their mettle against one another without the potential for expensive mistakes which are inherent behind the wheel of a real GT racing car.

After sadly losing a Scalextric race to a nearby child, who we must remark upon as a budding virtuoso in the world of miniature electric racing, Thomas moved swiftly on to meet the Bentley team.

And there the day began in earnest. Within an impressive pit garage, one which was not only carpeted but was also constantly vacuumed by a man with a rather nice custom, Bentley-emblazoned Dyson, Thomas was absorbed into the team. For the first time in Bentley Racing history, an outsider was allowed to listen in to the team radio as the drivers took to the track.

At the centre of a flurry of tyres being moved to and fro, refuelling and practice driver changes, (which looks oddly like a co-operative carjacking) Thomas caught a moment with British racing driver Guy Smith to talk all things P Zero and how they fit into the world of GT racing.

And after that, it was Thomas’ turn to fit into the world of GT racing. His very own Bentley Racing overalls in hand, Thomas ascended the steps to the team trailer a supercar photographer and descended a member, inexperienced or not, of the Bentley team. His induction began immediately.

Greeted by the sight of Bentley tyre techs up to their elbows in soap and suds, Thomas was beckoned to join the fray. As high-tech as the Bentley garage was, this part of the process certainly took the line of ‘if it isn’t broke, don’t fix it.’ Sponges and stainless-steel scrapers were the tools of the trade. And this was a trade in which Thomas was to be given a comprehensive crash course, as a technician scrubbed and scraped a Bentley wheel clean with ease before deflating the spent tyre to be removed elsewhere. With the seasoned techs taking a step back, it was Thomas’ turn. Some scrubbing, scraping and a thumb plaster later he had completed the task. A whole set of wheels sat gleaming and ready to receive fresh P Zero rubber.

Overalls removed and once again in the guise of a supercar hunter, it was time for lunch at the M-Sport hospitality tent. The conversation turned, as Thomas sat down with Bentley driver Andy Soucek, to how the moniker ‘Horsepower Hunter’ had arisen and how he had built his online fan base. “It started at University,” Thomas said. “I’d take pictures with my phone to show my friends all the supercars I’d see around the city. They told me I should be uploading them, to create an Instagram account. At first, I just took pictures on my phone, but I then moved on to better equipment and cameras to take better photos. I regularly upload to keep people interested, and my account has just grown from there.”

Lunch over, and with a couple of cupcakes from the M-Sport tent in tow for the road, Thomas headed trackside with his camera to capture the display of power, performance and control that is the Blancpain GT. What resulted was a concentrated shot of the Horsepower Hunter’s daily reality, with the track filled with incredible, finely-tuned racing cars while jaw-dropping examples of exotic supercars could be found all around the circuit. We didn’t tear him away this time; we didn’t have the heart. That was until it was time for Thomas to take to the track himself.

With the Blancpain GT day over, the pitlane did not fall silent. Instead, what resulted was a cacophony of engine noise and excited chatter as guests lined up to jump in a parade of production supercars which had lined up to take the animated fans on a hot lap of Silverstone.

So too did Thomas get to experience the production version of the Bentley Racing team cars he had gotten up close with earlier in the garage, as he saddled up in a Continental GT3 with Andy Soucek.

And there the day at Blancpain GT came to a close, with the Horsepower Hunter, who is entirely familiar with the exterior forms of some of the world’s greatest cars, hurtling around Silverstone inside one of them himself.

An interesting change of perspective at high speed! Here’s what Thomas Howarth had to say when he returned from his hot lap - “It was a unique and interesting experience seeing how the Bentley GT3 team works behind closed doors. I had the honour of working with the team and gaining an insight into how a race weekend operates, particularly when it comes to tyres! It was a very enjoyable day and I am thankful to Pirelli and Bentley for accommodating me”.